Black People in America Can No Longer Be Sold . . . But, Can They Be Bought?

“In 1850, an average slave in the American South cost the equivalent of $40,000 in today’s money.
– Disposable People: New Slavery in the Global Economy

As we enter Black History Month it was encouraging to learn that elected African American leaders gathered from around the region and across party lines this week to share ideas and information related to  their experiences running and being elected to office including the benefits of building coalitions within their communities.

This type of coalescence among Black leaders is particularly reassuring as the nation celebrates the 150th anniversary of the 15th Amendment to the U.S. Constitution which gave Black men in America the right to vote.

Yet as happy as I was to see Black leaders in the inland region come together in common cause, I also learned this week that African Americans are being drawn together in other parts of the country by supporters of President Donald Trump—Yes, the same president whose party broke all the rules to assure he would not be removed from office last week even though he clearly continues to violate the Constitution and his oath; and, who has clearly demonstrated through his words and deeds, a visceral dislike for people of color.

There is certainly nothing wrong with a group of Black people gathering in the spirit of community—it’s done all the time—however, in this instance it is concerning in light of the president’s actions that so clearly impact Black communities. 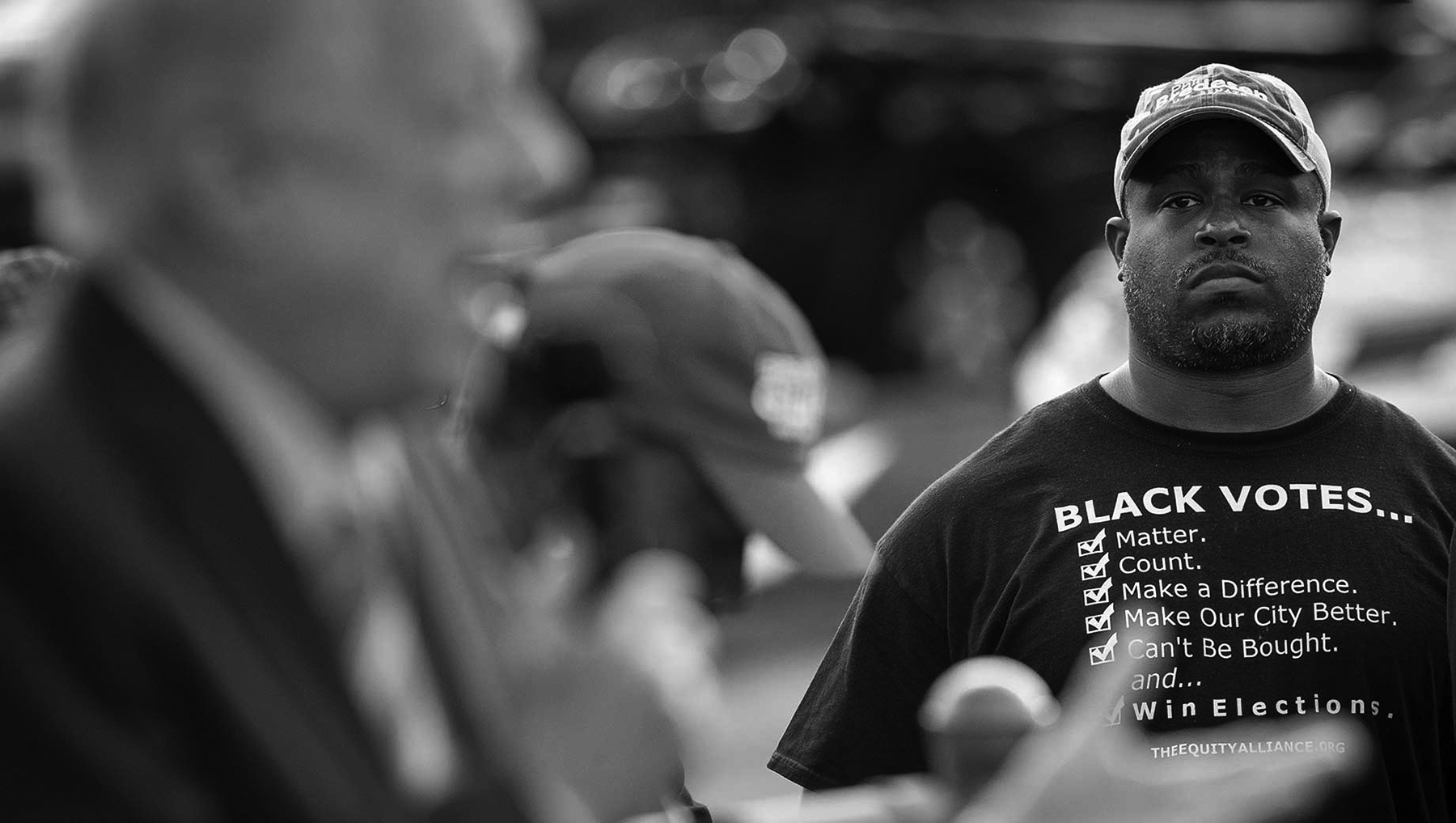 According to several media reports the first such event was held last month in Cleveland, Ohio. There, rally participants put tickets in a bin from which names were later drawn for cash prizes up to as much as several hundred dollars handed out in cash in white envelopes.  The Trump campaign appears to be pulling out all the stops in its efforts to woo Black voters as it works to erode the advantage held by the Democratic party in relation to them.

Event organizers claim the rallies are run by the book and intended to promote economic development in inner cities. That claim seems nearly laughable especially since the group behind the cash giveaways is registered as a nonprofit 501(c)3 charitable organization and there is no public disclosure regarding who its donors are—though it is probably fairly easy to guess who the donors might be.

One leading legal expert on nonprofit law said the giveaway arrangement raises questions about the group’s tax-exempt status, because it does not appear to be vetting recipients of its money for legitimate charitable need(s) at its rallies. At least one legal expert has questioned whether giving money away at a campaign rally is a charitable act, especially since there appears to be no qualification process.

Not surprisingly the group facilitating the rallies, Urban Revitalization Coalition (URC), has a Black man as its CEO who claimed (according to a Politico report) anyone receiving more than $600 is required to fill out a W-9 to assure compliance with federal tax law.

During the December event in Cleveland, the URC gave away a total of $25,000. Not surprisingly during the occasion Trump’s spokesperson defended Trump’s record on race stating, “President Donald Trump — the one that they say is racist — is the first president in the history of this country to incentivize people who have the money to put it into … urban areas.”

In the meantime, the president and his enablers continue their efforts to cut funding from one federal program after another designed to serve as safety nets for citizens of low-income communities. He has even issued an executive order calling on all federal agencies to help reduce poverty but squeezing programs.

Some of the presidents plans to accomplish a reduction in poverty include recalculating the poverty line; stricter enforcement of SNAP work requirements and income limits; rescinding regulations on payday lenders; making it harder for benefit recipients to receive green cards; making it harder to sue over housing discrimination; denying housing aid to families of immigrants without documents; allowing homeless shelters to deny housing to transgender individuals; work requirements for Medicaid recipients, and the list goes on.

As the Trump campaign continues it plans for inner city rallies in support of his campaign for reelection, February 3rd marked the 150th anniversary of the 15th Amendment to the U.S. Constitution that gave Black men the right to vote.

The 15th Amendment reads in part, “[The] right of citizens of the United States to vote shall not be denied or abridged by the United States or by any state on account of race, color, or previous condition of servitude.”

Today, Trump and members of the Republican party are unabashedly working on one hand to suppress the Black vote in states around the country despite the mandates of the 15th Amendment; while on the other hand he simultaneously attempts to buy Black votes (since he can’t buy Black people) by giving away money.

In a way, this is not surprising now that we understand the president’s business acumen. In the seminal work, “Disposable People: New Slavery in the Global Economy” author Kevin Bales noted in “[In] 1850, an average slave in the American South cost the equivalent of $40,000 in today’s money.”

With this in mind, for racist president and pretend billionaire like Donald John Trump and his supporters, in contrast, it probably appears to be a reasonable investment to split $25,000 between maybe 100 people at each of a few rallies across the country in an effort to buy a few Black votes.

As we consider what Blacks sacrificed to secure passage of the 15th Amendment in 1870 along with the added price paid by Blacks to make voting a reality 95 years later with passage of the 1965 Voting Rights Act, maybe the questions we should be asking are: How much did our ancestors pay forward for their progeny to vote in 2020? Were their blood sacrifices worth more than the few hundred dollars offered some of their descendants to support a man so “unworthy” of their sacrifice?

To these questions I would answer that their sacrifice cannot be quantified and were certainly worth more than a few hundred dollars thrown at a few members of a long-suffering community. One of the best ways for us to honor the sacrifices of our ancestors this year is to assure we vote this November.

Of course, this is just my opinion. I’m keeping it real.”