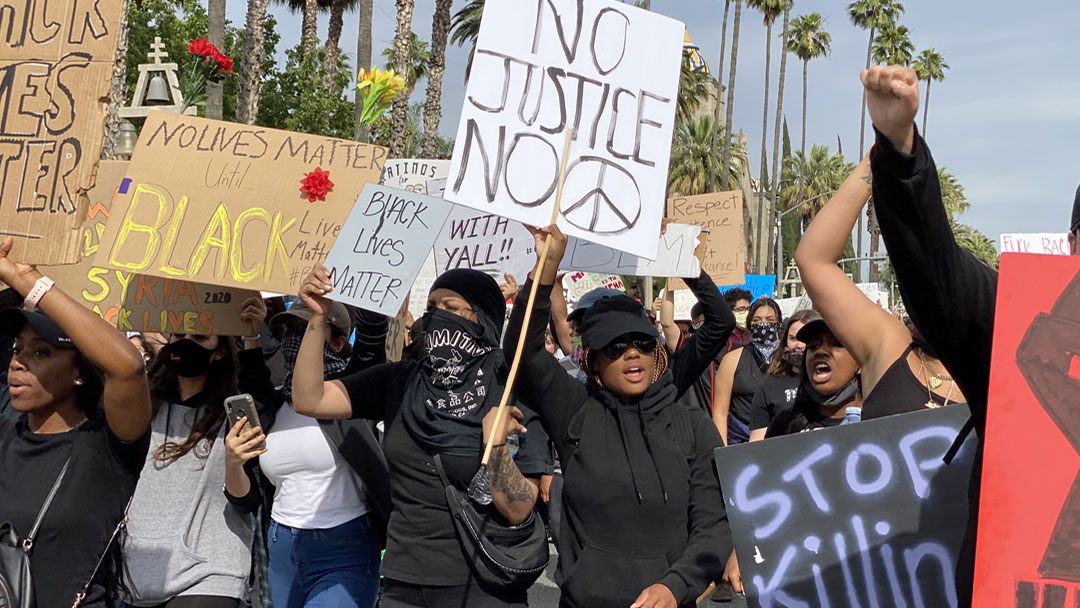 Thousands of Riverside County community members came together downtown to peacefully protest in front of the Riverside Public Library to fight against the continuous police brutality African-Americans face across the United States.

“Although we are expecting a peaceful and safe demonstration that will allow our community members to express their First Amendment rights, we will effectively address any attempts to disrupt those engaging in peaceful protest,” said Police Chief Larry Gonzalez.

American citizens stood up to demand justice after  Minneapolis police officer Derek Chauvin killed George Floyd by keeping his knee on his neck until he became unconscious.

Many Americans are tired of the way police have been mistreating Black people and are requesting action be taken.

Protesters  chanted “Black Lives! They matter here!”, “What’s His name? George Floyd”, “What’s Her name? Breonna Taylor!” , “I Can’t Breath!” and a chant calling for all the police officers involved in the death of Floyd be tried for murder.

Supporters of the cause began arriving in small groups before the scheduled demonstration at 4 p.m. and respectfully abided by the County of Riverside’s emergency curfew.

The curfew was initially scheduled from 7 p.m Monday to 6 a.m. Tuesday, but was changed to start at 6 p.m. Monday and lasted until sunrise Tuesday. The change was to enable police to control the environment and allow demonstrators to put their first amendment rights to use in a nonviolent way.

“All I want is to make sure everyone is our allies because you need as many people as possible. We don’t object against anybody, no matter what they look like and no matter what they believe in,” said Cameronn Allen, who helped organize the protest.

Congressman Mark Takano took the speakerphone during the protest in solidarity to create change through voting. The crowd was unable to hear most of his speech although he influenced everyone to chant “Protest, Vote”.

Hydration stations, snacks and necessary supplies for the public were set up for use by protesters

“A lot of friends from Riverside, the students, faculty and my best friend’s mom have brought over 30 cases of water,” said Allen. “I raised so far $1,000 from twitter alone.”

Any violence that took place during Monday’s protests was not provoked by community members who wished not to stray away from the real message intended to be heard: we need a just and equitable system regardless of skin color.

Vonya Quarles, Co-Founder and Executive Director of Starting Over Inc., a transitional housing and reentry advocacy organization, passed out flyers to gatherers to have Riverside Sheriff Chad Bianco removed from office with the hashtag Release Riverside. Ms. Quarles stated, Sheriff Bianco is the biggest threat to the safety of Riverside county residents due to jails in the county having the highest number of COVID outbreaks.

Law enforcement officers including Sheriff Bianco, took a knee during the protest in the middle of an intersection in solidarity with protesters as an expression of  unity to begin the conversation.

“In Riverside we protest peacefully and purposefully. Don’t turn the cops against us, but make them our allies. The enemy are the people leading the cops to kill us,” wrote Allen on twitter.

To  any supporters detained during the march a local fundraiser has been started to assist with the financial burdens of bail by the Queer Coalition. Although the goal is to remain peaceful, resources are still being collected in the event anything happens.

Details regarding the next protest in downtown Riverside has yet to be released.  Curfew also may be extended by Chief Gonzalez. For more information visit http://www.riversideca.gov/Curfew.