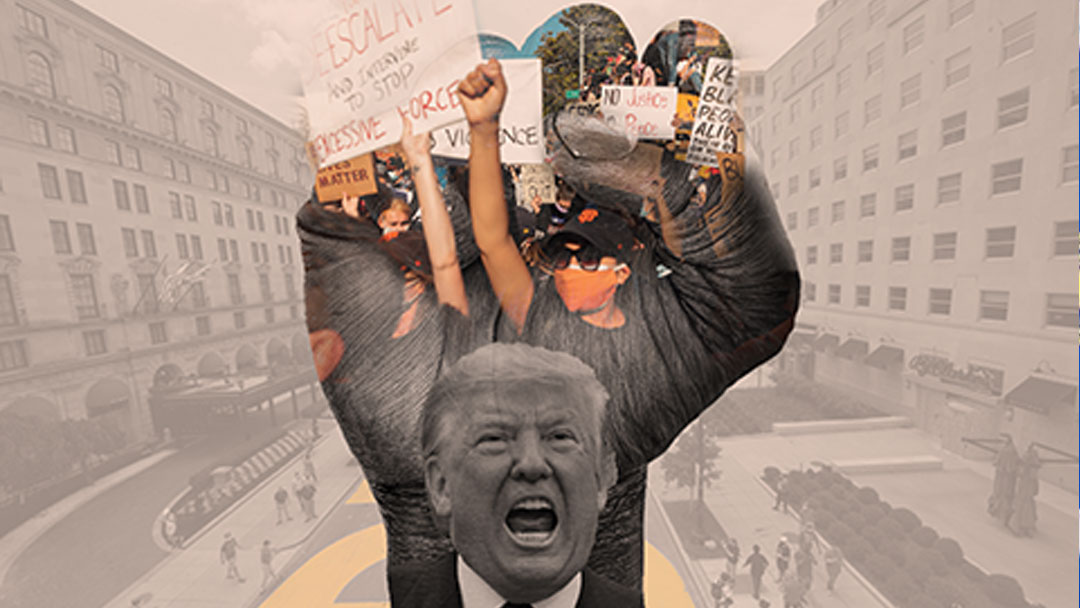 Washington D.C. – Just when many thought the temperature in America could not rise any higher, the President of the United States announced he wanted to impose the Insurrection Act which would give him authority to deploy military troops within the borders of the United States to put down “lawlessness.”

The measure, last used after the jury decision in the Rodney King case in 1992, has a long and complex history with the Black community—once used to protect Black Lives it has since become a symbol of oppression and control, a legal weapon used to suppress Freedom of Speech in relation to Black peoples’ calls for fairness, justice and full rights of citizenship in this country.

King was brutally beaten by Los Angeles police officers on March 3, 1991 and like the video recordings of the George Floyd murder which sparked today’s national response, King’s brutal beating was also caught on camera.

It took national outrage for officers in the King incident to even be charged; and when they were subsequently acquitted, frustration and the historical sense of futility felt by members of the Black community, erupted. The federal government, with consent of the governor, enacted the Insurrection Act.

In the wake of the Rodney King uprising, there was a review of the decision to implement the Insurrection Act and deploy federal troops in California. The report titled, “Posse Comitatus Act and the United States Army, a Historical Perspective” was published by the Combat Studies Institute in Fort Leavenworth, Kansas.

The report noted how former Los Angeles Police Chief Darryl Gates and former Los Angeles County Sheriff Sherman Block were both skeptical of the need for federal troops and reportedly believed, “[T]he riots were abating and they could manage with the California National Guard.” In other words, police officials in Los Angeles did not believe the federal military was warranted.

Also, in the wake of that uprising a joint meeting of California law enforcement officers concluded, “The calling in of federal troops appears to have been a mistake. This resulted in the National Guard becoming federalized which severely limited their flexibility and missions they were able to undertake.”

During the military occupation of Los Angeles in 1992, 47 people were killed and 2,116 wounded—211 of those critically. In addition, calls to local fire departments rose to 5,534. These figures, according to reports, far surpassed any similar event in the nation’s history.

Records show by the time the National Guard returned to state status and federal forces withdrew, the death toll from the uprising stood at 54, and the number of injured had climbed to 2,328. In addition, more than 850 structures were burned and about $900 million in property was destroyed.

Cotton appeared on Fox News where he offered, “[I]f necessary, the president should use the Insurrection Act to deploy active-duty military forces to these cities to support our local law enforcement and ensure that this violence ends tonight . . .not one more night.”

Expounding further, Cotton even offered a framework for the president to couch his action, noting how  all the president needed to do was to say to the public, ‘justice will be done in accordance with the law relative to George Floyd; and then offer his respect for peaceful protests,’ while also advising people, “Rioting, along with anarchy and looting, will end.” 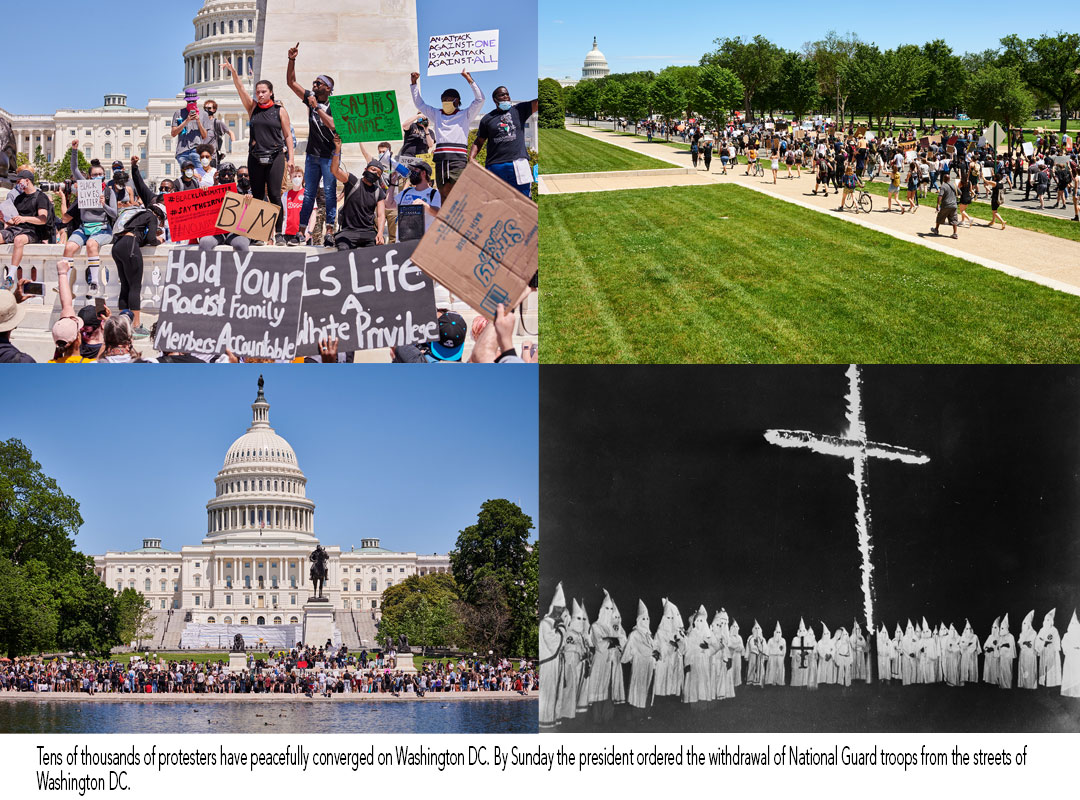 Almost as soon as Cotton planted this seed publicly on Fox News, word spread in the media the president was seriously considering the Act’s implementation—though critics have alleged this was probably the president’s plan all along.

NBC even reported the military forces might be dispatched from Fort Bragg in North Carolina and Fort Belvoir in Virginia. In both cases they could be in Washington, D.C. within hours.

And within hours on Monday, they were.

A surreal scene unfolded in Washington D.C., Monday afternoon when President Trump lumbered from the White House with minions in tow and stood in front of St. John’s Church (Church of the Presidents), which sits across from the White House. The church’s basement was damaged by trouble-makers among the protesters using fire, the evening before.

Many across the country abhorred Trump’s use of the location as backdrop to his made for television “dog whistle” to his supporters.

In cartoonish fashion, the president announced the unleashing of thousands of heavily armed soldiers, military personnel, and law enforcement officers on the community of Washington, D. C. to, as he proclaimed, “Stop the violence. . .”

In other words, the military was being deployed in Washington, D.C. where a large Black community exists with no real political leverage because succeeding Congresses—during both Democratic and Republican administrations—have failed to work for its statehood in any meaningful way. This vulnerability was clearly exploited by the Trump administration—he could not have facilitated this stunt in any state without the governor’s request or authorization.

Although governors can ask the president for active duty military assistance and have a right to decline it if offered, to date reports indicate none of the nation’s fifty governors have requested such assistance.

Instead, governors are relying on local law enforcement and National Guard resources on active duty within their respective states to support local police; unfortunately, because Washington, D.C. is not a state and does not have a governor, it is at the mercy of the president in this regard.

Readers may recall the antics of former Republican President George W. Bush during the Katrina disaster when he allegedly tried again and again to convince former  Louisiana Governor  Kathleen Blanco to agree to a similar action and surrender command of her state’s National Guard troops to the federal government.

The Insurrection Act was initially designed and implemented to close a gap in the Posse Comitatus Act and was enhanced and expanded several times over the years. Its objective, to have a strategy for use by authorities should Americans rise up in anger over conditions.

The Posse Comitatus Act was also intended to outlaw the willful use of any part of the Army or Air Force to execute the law in the homeland unless expressly authorized by the Constitution or an act of Congress. However, there are statutory exceptions—like the Insurrection Act—which allow the president to use military force to suppress insurrection or to enforce federal authority, as well as exceptions that permit the Department of Defense to provide federal, state, and local police with information equipment, and personnel.

Black Americans have a tenuous history with Posse Comitatus as it was used in the years before the Civil War in relation to the Fugitive Slave Act.

Under the Act, slave owners whose slaves had escaped to another state were entitled to an arrest warrant and to have the warrant executed by the federal marshals. The marshals could then legally ask bystanders, or “Posse Comitatus” of the involved county to help capture the freedomseeker.

Posse Comitatus was also used by President Abraham Lincoln in 1861 to suppress the Southern uprising which would eventually led to the Civil War.

And, after the Civil War, Posse Comitatus was used in a way staunchly opposed by Southern Whites especially when the government sent military forces to protect the newly freed slaves consisting of no less than 100,000 Black federal soldiers.

Andrew Johnson however, who became president after Lincoln’s assassination, made clear he was a supporter of White supremacy. Consider comments made in his 1868 State of the Union address, “The attempt to place the White population under the domination of persons of color in the South has impaired, if not destroyed, the kindly relations that had previously existed between them; and mutual distrust has engendered a feeling of animosity which leading in some instances to collision and bloodshed, has prevented that cooperation between the two races so essential to the success of industrial enterprise in the southern states.”

1868 was also the year of the 14th Amendment which gave Black men the right to vote though it specifically excluded language that addressed literacy tests and poll taxes. This virtually ensured Blacks would continue to be disenfranchised for years to come.

In 1870 the nation’s two political parties reached what is recorded in history as the 1870 Compromise, to resolve a dispute regarding who won the 1869 presidential election. In exchange for allowing the Republican candidate to become president, the party abandoned its remaining support for the equal rights of Blacks in the South.

This compromise resulted in the government removing the last federal troops from the South and brought a formal end to the Reconstruction Era. As a result, this agreement between the Republican and Democratic parties for their own political purposes resulted in the lives of former slaves vulnerable to the whims of Southern racists.

In the wake of the 1870 Compromise, Congress passed the Civil Rights Act of 1871, also called the “Ku Klux Klan Act,” which included a new “insurrection provision.” With this new authority, the president immediately deployed federal military units to enforce civil rights in the South. This eventually led to the arrest of hundreds of suspected klansmen who were tried in federal court.

As might be expected, White southerners were outraged and argued that this interfered with state’s rights, while former slaves and their supporters argued the federal government was not doing enough to protect them.

By 1877 however, the federal government found evidence that state governments in several southern states were being aided in their political fortunes by the presence of the military—ultimately, they were withdrawn. Once again leaving southern Blacks on their own.

After generations of slavery, Black Americans have now endured another century and a half of unmitigated brutality, economic injustice, and an obscene system of criminal incarceration.

Today, it is difficult to reconcile how a law once used to protect Blacks during the abbreviated era of Reconstruction, may once again be used to silence the cries of their descendants who are still fighting for the same access to fairness and equality, longed for by their ancestors more than 150 years ago.