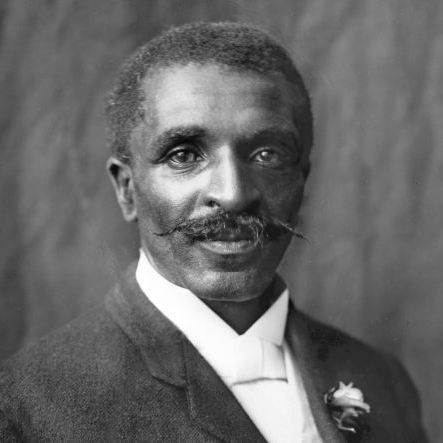 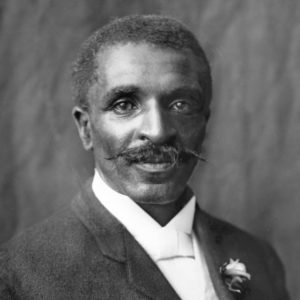 George Washington Carver (1861-1943), a brilliant self-taught Black scientist and agricultural chemist, was born to an Enslaved mother. Despite talent as an artist, living on a Missouri farm spurred him to devote his life to finding out what he could about plants; what they could teach, and what were their benefits. As a young man in the fields, he would look down at the soil, noticed how different it looked compared with a few years earlier, and say: “It looks “tired.” Further comparisons showed the yield of the cotton not to be as good as in prior years. Such things caused him to wonder about happenings in Nature’s world. His boyhood insatiable curiosity about Nature was so great that his community called him “the Plant Doctor”. Relentless scientific study confirmed his teachings to farmers the necessity for rotating their crops. Also, adding peanuts and sweet potatoes to their cotton fields would put back into the soil what the cotton had taken out. He devised 105 recipes for the tasty peanut and discovered 200 new products—cereals, oils, soaps, and food substitutes. He also discovered many industrial uses for the by-products of such crops as peanut shells. From the sweet potato he discovered 118 practical products ranging from a sticky glue for the backs of stamps to a wartime wheat. He perfected 500 substitute vegetable dyes from the roots, stems and fruit of a variety of plants and his research was instrumental in the start of the dehydrated food industry. He developed a synthetic marble and his work with plants and clay allowed him to come up with 27 distinct colors not seen before. Besides enjoying laboratory experimenting, he knew farmers would most benefit from his discoveries. So, as to connect with poor Black farmers, he devised the “Moveable School”–a large wagon containing farm machinery and exhibits and pulled by mules. Classes were held on each farm to explain to Black farmers what he taught at Tuskegee Institute in Alabama. It became a big success, bringing prosperity to many. Mr. Carver was never a man to stay idle, always looking and questioning how to improve people’s lives. And he had a mind that never rested.

As a boy–fortunately before television and the even more terrible Social Media–I read a great deal. No single person inspired me more than Dr. Carver. Every summer I learned things like him walking 9 miles to and 9 miles from school; turning down a Professorship at Iowa University to teach at Tuskegee; having to go the junk yard to find items for his laboratory; about never getting patents for his discoveries or not even cashing checks sent to him. A verse Dr. Carver wrote says much about him: O! Sit not nor idly stand//There’s plenty to do on every hand//If you cannot prosper in work like some//You’ve at least one talent, improve that one. His epitaph reads: “He could have added fortune to fame, but caring for neither, he found happiness and honor in being helpful to the world.”