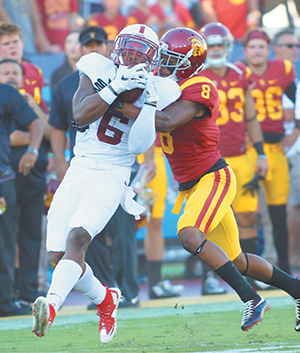 Stanford coach David Shaw had a simple plan of attack against USC on Saturday evening. It wasn’t overly complicated, crafty or particularly original. In fact, it was basically a replay of the same plan he has used in 2011 and 2012 when the Cardinals wrapped up 4 year sweep against the Trojans led by Andrew Luck the NFL’s 2012 overall first round draft pick.

After a four year slide the Trojans had a resurgence narrowly winning the last two meetings by a combined total of 6 points. But Stanford had had enough and forced 78,306 fans to watch the USC defensive get exposed in its conference debut and lose big to the Cardinals.

Stanford is USC’s oldest opponent dating back to 1905. Although USC holds an appreciable advantage in the series at 60-30-3, in recent years I find the Stanford game to be a kind of informal barometer for USC’s potential season success. Particularly when the two teams meet early in the season.

Although the game is not typically recognized as a rivalry, the smart guys from the Bay Area are always well coached, tough as nails and offensively efficient. The Trojans’ performance against Stanford usually provides some glimpse into their ability to handle the rest of their schedule. The availability of game film to all of their opponents doesn’t help either.

That being said, after Saturday’s debacle, the Trojans should be seriously concerned. It was not pretty. Stanford’s offense punished the Trojans’ secondary.

USC quarterback, Cody Kessler an early season Heisman hopeful was 25 of 32 for 272-yards and three touchdowns with no interceptions. The Trojans’ running game amassed 155 total rushing yards. Not great but overall the offense was solid. USC’s defense couldn’t stop anything Stanford did.

“We didn’t execute in so many areas. We lost containment too many times. We loss the edge to a team that runs on the edge. We failed to do any of the things we knew we had to do,” said head coach Steve Sarkisian.

Stanford’s redshirt senior quarterback Kevin Hogan was 18 of 23 for 279-yards and no interceptions. Christian McCafferey rushed for 115-yards on 26 carries. Austin Hooper led all Stanford receivers with 79-yards. Although not overwhelming numbers, Hooper’s size was a huge advantage. At 6’4” and 248 pounds, Hooper’s ability to punish the smaller defenders made him almost automatic on third down conversions.

Stanford converted 8 of its 12 third down attempts. “We just couldn’t get them off the field,” said Linebacker Su’a Cravens.

Although it’s by means the end, it is never a good thing to lose the conference opener. Even more troubling for USC is its recent inability to pull itself together after an upset.

When Stanford shocked the #2 ranked Trojans in 2012, the team tumbled to a 7-6 season record. USC continues with a trip to Arizona State next. Tempe presents some equally bad memories for the Trojans. In 2013, after giving up 62 points to the Sun Devils then head coach Lane Kiffin was dismissed shortly after arriving back in Los Angeles.

It’s still early and there is a lot of football left to play but USC had better figure out improve its defense or it’s going to be a long season.

Gary Montgomery can be reached at gmontgomery@att.net