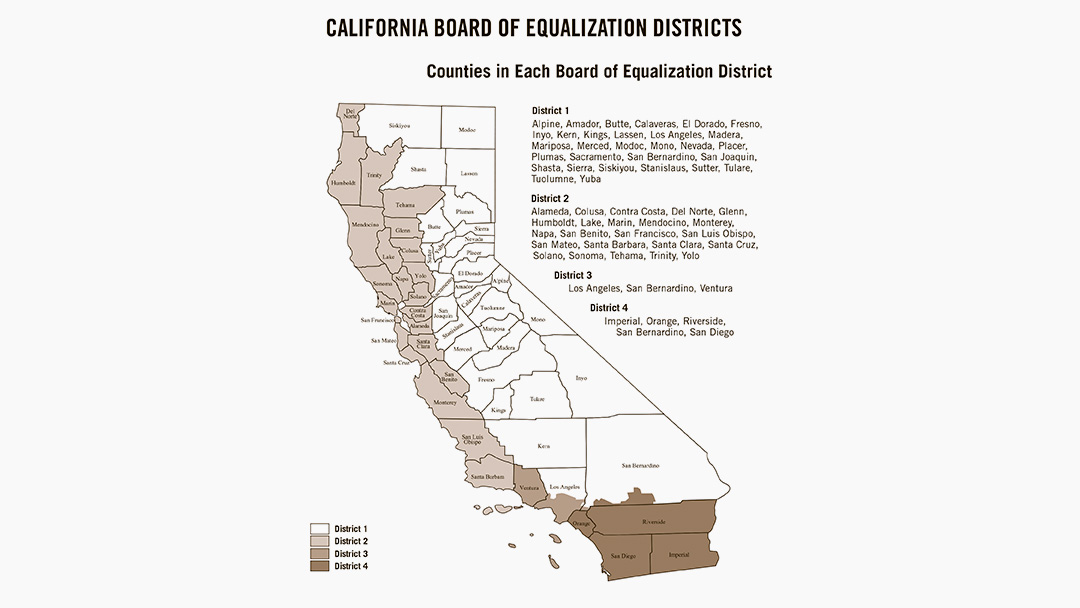 All Seats on State Board of Equalization Up for Grabs

On November 6, voters will decide who will be elected to fill the four, soon to be vacated seats, on the California State Board of Equalization.

The California Board of Equalization (BOE) was established by a state constitutional amendment and is the only elected tax board in the country, yet few Californians are versed in the magnitude of its roles and responsibilities.

The BOE works to ensure practices related to county property tax assessments are equal and uniform across the state and is also responsible for 30 of the state’s tax and fee programs which include setting gas tax rates and pipeline levies. Collectively, these programs generate at least 30 percent of the state’s revenue totaling in the tens of billions of dollars.

In addition, the board has oversight functions that include periodic compliance audits of the state’s 58 county assessors’ programs and develops property tax assessment policies and informational materials to guide county assessors and local assessment appeals boards.

In March 2017, the BOE came under intense fire and bruising criticism when an evaluation of its operations by the California Department of Finance revealed egregious mis-allocations and reporting errors of sales and use taxes that spanned several years. The audit also criticized some BOE board members who the audit showed, routinely supplemented their staff by redirecting revenue generating staff to perform what was defined as non-revenue generating board member activities.

According to State Controller Betty T. Yee, the 2017 audit not only identified material weaknesses in how the board allocated retail sales and use tax, in some instances those failures resulted in state revenue being deposited in the wrong accounts.

There were also weaknesses noted in the board’s oversight of its internal revolving fund used for salaries, travel, and vendor payments. When the audit findings were revealed Yee stated, “The board is entrusted with making sure tax dollars get to the right places. I am deeply concerned that the board is falling short in this crucial mission.”

She added, “The board must implement more internal controls, train staff, and break down silos that are detrimental to sound administration.” Governor Jerry Brown did not wait for the BOE to right its own ship.

In response to the findings the Governor took a hatchet to the agency. In June 2017, he signed legislation that reduced the size of BOE staff from 4,800 to 400. He also transferred responsibilities for taxpayer appeals as well as the collection of sales and excise taxes to two new departments, the Office of Tax Appeals and the Department of Tax and Fee Administration. The board remains responsible for setting gas tax rates and pipeline levies and for overseeing county property tax assessments.

Reflecting on the findings and fallout related to the 2017 audit, some believe a new team of directors was warranted. On November 6, Californians will have an opportunity to select an entirely new board from the following slate of candidates. District 1: Ted Gaines (R) and Tom Hallinan (D); District 2: (D) Malia Cohen and (R) Mark Burns; District 3: (D) Tony Vazquez and (R) G. Rick Marshall; and in District 4 the choice is between (D) Mike Schaefer and (R) Joel Anderson.