I’m a real friend,” Trump proclaimed to members of the LGBTQ community during his 2016 bid for the presidency but with friends like him (as the saying goes) who needs enemies.

He was sworn in as president at noon on January 20, 2017, an event certain to go down in history for all the wrong reasons. Within minutes of the ceremony however, Trump began to express his true “friendship” to the LGBTQ community by erasing all mentions of the LGBTQ community from the White House website as well as the websites of the Department of State and the Department of Labor—many considered it a warning shot across the bow. This was only the beginning.

During his short years in office, which seem to many of us like an eternity, Trump has taken no less than 114 actions which undermine protections for members of the LGBTQ community—although many targeted a large swath of underrepresented communities, many were specifically designed with this goal in mind.

Among his many expressions of “friendship,” the president has rescinded Title IX protections for transgender students; excluded the LGBTQ community from The National Survey of Older Americans Act Participants and the Annual Program Performance Report for Centers for Independent Living; cut HIV and AIDS research funding under the National Institutes of Health; cancelled plans to add the LGBTQ community to the 2020 U.S. Census; broke with an eight year tradition and refused to issue a presidential proclamation designating June as LGBTQ Pride Month; removed sexual orientation and gender identity from the Department of Commerce’s Equal Employment Policy; appointed an anti-transgender activist, to head the Office of Gender Equality and Women’s Rights at the US Agency for International Development; banned transgender servicemembers from serving in “any capacity” in the U.S. military; used the official White House webpage to direct readers to an article published by the Heritage Foundation that called being transgender a “psychological disorder;” made several anti-LGBTQ judicial nominations including one who called transgender children part of “Satan’s plan;” filed an amicus brief in support  of religious exemptions allowing discrimination against members of the LGBTQ community; had the Department of Health and Human Services erase all mentions of LGBTQ community health needs in its strategic plans through 2022; reversed non-discrimination protections for transgender people in the workplace under Title VII of the Civil Rights Act of 1964; expressed support for businesses owners’ ability to put up signs saying they won’t serve gays.

This is just a partial list of actions against the LGBTQ community Trump took his first year in office. Not surprisingly, he began the following year similarly with the establishment in January 2018 of a new department within the Department of Health and Human Services to shield healthcare workers who refuse to treat LGBTQ patients based on moral or religious objections. 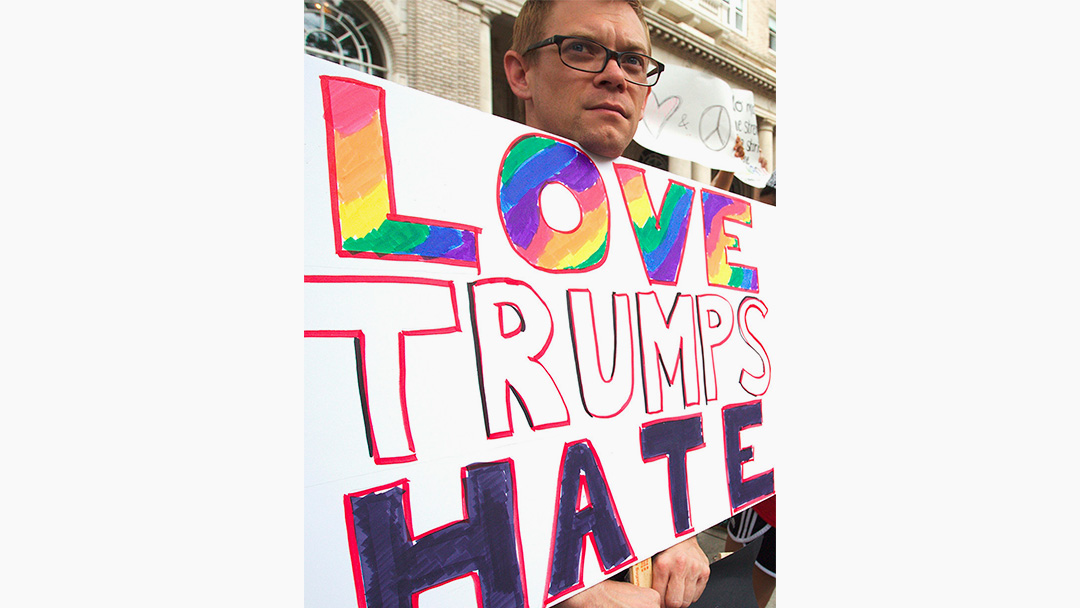 114 and counting presidential actions that negatively impact the LGBTQ community according to the nonprofit media monitoring organization GLAAD (Gay & Lesbian Alliance Against Defamation) and other national media outlets.

Like the many other vulnerable groups targeted by this administration—including immigrants, asylum seekers, Muslims, the poor, all people of color in this country, and others, the LGBTQ community is also on alert—wary—worried about what may be next on the president’s wish list for themselves and others.

Members of the LGBTQ community are among the groups most targeted for hate crimes particularly Black transgender women who continue to be murdered at an alarming rate with barely a mention in the national media.

Years ago, I visited my daughter while she spent a semester studying at the Paris-Sorbonne University. During my stay we took a short three-day excursion to the beautiful city of Amsterdam where we toured the usual tourist sights including the Rodin Museum and the home where Anne Frank and her family hid from the Nazis in World War II, among others. While there my daughter took me to a site she’d discovered quite by accident months earlier. “I want you to see this,” she said compassionately as she guided me to the site.

The place was the Homomonument, a memorial in the center of Amsterdam.  It was the first monument in the world to commemorate gays and lesbians who were killed by the Nazis because of their homosexuality. It takes the form three large pink triangles made of granite set into the ground so as to form a larger triangle, on the bank of the Keizersgracht canal. The monument was designed to “inspire and support lesbians and gays in their struggle against denial, oppression and discrimination.”

Although lesbians were not as severely punished, thousands of gay men were castrated, and thousands more died inglorious deaths in Nazi concentration camps.

Unlike the yellow Star of David Nazis forced members of the Jewish community to wear, gays were forced to wear a pink triangle as a mark of identification and shame. Even more disturbing is after the war, homosexual concentration camp prisoners were not acknowledged as victims of Nazi persecution, as a result, they were refused reparations.

It may sound cliché that history repeats itself and we certainly pray it will not but sometimes as we laugh and joke about Trump’s absurd and embarrassing antics, we can lose sight of his dangerous targeting of vulnerable groups in this nation. If he will cage children and refuse them medical care, what else is he capable of? I believe it is incumbent on each of us to remain vigilant for all of us.