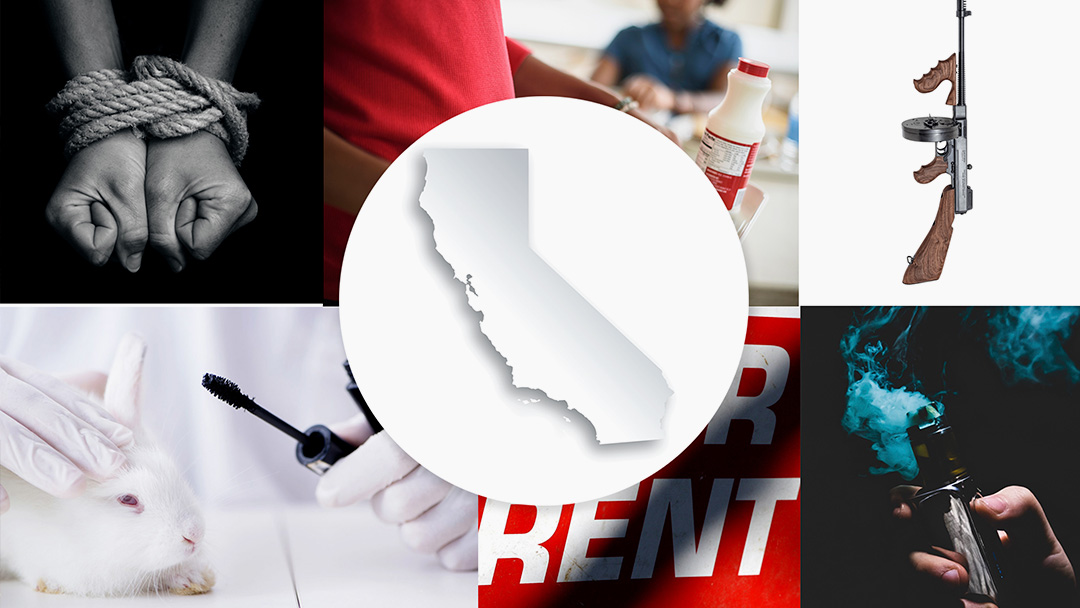 California Welcomes the New Year with a Multitude of New Laws

A New Year in California would not be the same if it did not arrive with a slate of new laws and regulations and 2020 is no exception.

State legislators worked diligently to codify a variety of measures aimed at improving the quality of life for the state’s residents and the diversity of the new regulations are evidence of their expansive focus. From circus animals to consumer protections and from medical marijuana in schools to curtailing school suspension, the laws set to take effect January 1, 2020 appear to have something for everyone. Whether you are concerned about assuring a fair minimum wage, consumer protections, criminal justice, workplace fairness or issues related to privacy—hopefully, you will not be disappointed.

Following is a brief synopsis of some of the major changes Californians should be aware of in the coming year.

The sale of cosmetic products with ingredients that were tested on animals is prohibited in California however the law will not impact products sold globally where animal testing is required by law.

The California Department of Parks and Recreation has until July 1, 2020 to establish a comprehensive list of state parks that allow dogs, including the specific areas that allow dogs and the total miles of trails that are open to dogs.

Eating roadkill is legal. Drivers can now take and eat animals they have hit with their cars and killed. However, if a driver brings roadkill home, he/she is required to register the animal with the state and apply for a 24-hour wildlife salvage permit.

Fur products can no longer be manufactured, traded or sold in the state unless it is done for religious or tribal purposes. There are however exceptions for leather, cowhide and animals preserved by taxidermy.

Circuses are banned from using animals except for domestic dogs, cats or horses.

“When you are writing laws, you are testing words to find their utmost power. Like spells, they have to make things happen in the real world; and like spells, they only work if people believe in them.”
– Hilary Mantel

Students with unpaid lunch fees will no longer receive a different lunch than their peers—all students must now receive the same meal at lunch.

Schools have the right to decide if parents can give their children medical marijuana on campus however students will need a valid recommendation from a doctor. However, the cannabis can not be stored at school.

The statute of limitations to report childhood sexual abuse is suspended for three years starting January 1, 2020. In addition, adults who survived childhood abuse now have until the age of 40 years to file suits. Also, those who are older than that but just connected to the abuse to a psychological injury or illness in the past five years can also pursue a lawsuit.

Schools are now banned from suspending students in grades 4-8 for disrupting school activities or defying teachers and administrators. Students in grades K-3 already have this protection. The rules will not apply to high school students until 2025.

Interest rates on consumer loans between $2,500 and $9,999 will now be capped at 36 percent above the Federal Reserve’s main interest rates.

New requirements and restrictions on businesses that collect and sell personal information of California residents. Companies that fail to comply with the law may be subject to private civil litigation brought by aggrieved consumers seeking recovery of statutory damages, in addition to enforcement by the California Attorney General and the imposition of hefty penalties. Detailed information about the new guidelines is available online. 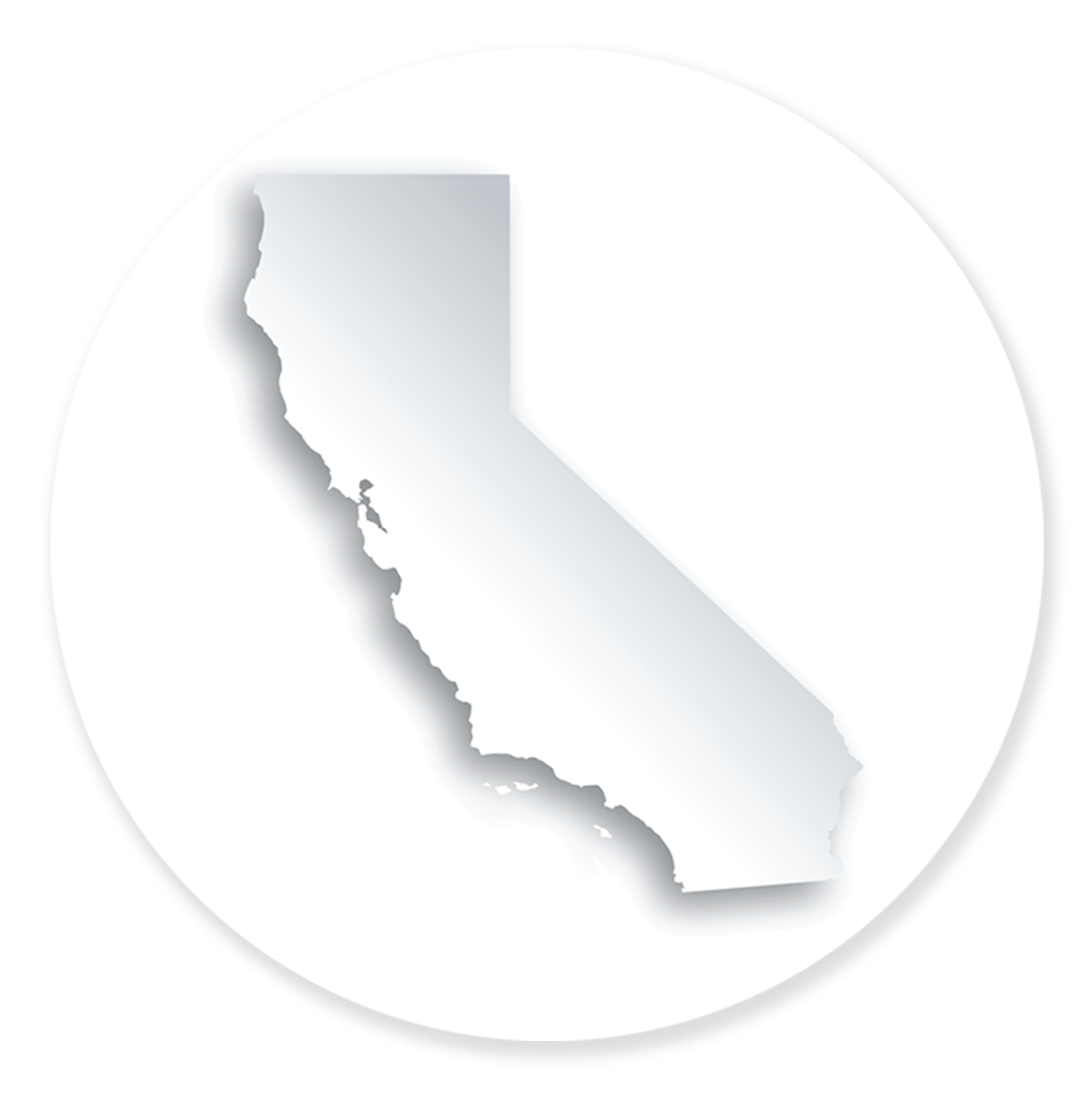 Internet users now have more control over their data. Among other things, they now have the right to know what data is collected, the right to reject the sale of their information and the right to delete data.

Minors under 12 who commit non-violent crimes will no longer be sent to Juvenile Hall and instead will be released to his or her parent(s)/legal guardian(s). The law does not apply to minors who commit murder,

rape, or cause great bodily harm.

Operators of motels and hotels in California must provide training to teach its staff regarding how to identify victims of human trafficking.

The state can no longer renew contracts with private prison companies and all private prisons and immigration detention facilities in the state must  be phased out by 2028.

Individuals will now have to wait 30 days between purchases of semi-automatic rifles.

Employers, co-workers and teachers who fear a person will harm themselves or others can seek a restraining order for gun violence which will allow law enforcement to temporarily take away that person’s gun(s). The individual seeking the restraining order must get approval from their employer in addition to filing sworn statements. This law does not take effect until September 1, 2020.

Medicaid is now available to low-income adults age 25 or younger regardless of their immigration status.

California is now the first state in the country to include access to gender-affirming medical services, mental health counseling, hormone therapy and surgery.

Communities not previously protected by their own rent control laws are now covered by statewide rent control protections which limits rent increases to five percent each year plus inflation, but never above 10 percent total. The law does not apply to housing built in the past 15 years prior. However, the 14 years is a rolling number and the date housing is excluded will change every year.

Immigrants 18 years of age and older can now serve on state boards and commissions regardless of their immigration or citizenship status.

Manufacturers are now required to reimburse dealers for warranty repairs “at rates equal to the franchisee’s retail labor rate and retail parts rate.” There will also be a ban on the Warranty Surcharges typically used to offset the increased warranty costs.

Requires utilities like PG&E to devise plans on reducing the negative impact of planned power shutoffs to first responders and people with disabilities.

Gives the California Public Utilities Commission more oversight over tree trimming efforts by utilities. Power companies would have to submit timely reports on their brush and tree trimming work.

Establishes a wildfire warning center to broaden the state’s ability to predict and prepare for wildfire. The center would rely on a statewide network of automated weather stations and fire detection cameras.

The period of time employees have to file a verified complaint with the Department of Fair Employment and Housing (DFEH) for alleged Fair Employment and Housing Act (FEHA) violations, such as claims for unlawful discrimination, harassment and retaliation, is extended from one year after the date on which the unlawful practice occurred to three years.

Employees who do not receive payment of their wages can file a private action to: (1) recover statutory penalties against the employer in a hearing before the Labor Commissioner; or (2) seek to enforce civil penalties under PAGA. They are prohibited from pursuing both remedies for the same violation(s). They may however pursue these remedies in addition to penalties he/she may recover through an action brought by the Labor Commissioner.

California becomes the first state to ban workplace and school discrimination based on a person’s natural hairstyle or hair texture. Protected hairstyles include braids, twists and locks.

While aimed directly at gig workers, this new law may also apply to many more contract or independent workers in California. Under AB-5, workers would be considered employees and not independent contractors if the employer controls the work, directs them in the course of their work or if the worker’s job is part of a company’s core business. Among others, freelance journalists (including those who use video) will be among those most grievously impacted as they will be capped at 35 pieces of content per year.

While California has had a law requiring employers to provide breaks for nursing mothers, many were forced to express breast milk in a bathroom stall or office closet. This new law requires companies to provide appropriate lactation accommodations that is close to the employee’s work area, has electrical plugs and is free of intrusion.

Benefits under Paid Family Leave will increase from six weeks to eight weeks starting on July 1, 2020.

Any provisions in settlement agreements entered into on or after January 1, 2020 that prevent workers from obtaining future employment with the settling employer or its affiliated companies are now invalid and prohibited.

Requires businesses with at least five employees to provide sexual harassment training to its employees within six months of being hired, and every two years after that.

There are more protections for those wishing to display religious items like menorahs or crosses outside their homes. Landlords and homeowner associations can no longer ban such displays on entry doors or door frames; however, the items cannot be larger than 26 by 12 inches.

Smoking and vaping is banned at beaches and state parks. In addition, those who throw away cigars and cigarettes at state parks and beaches will be fined.

Effective October 1, 2020 residents will need to present a REAL ID-compliant license/ID or another acceptable form of identification (like a passport or passport card) to access federal facilities, this includes commercial flights. To learn more about how to apply for your REAL ID visit the California Department of Motor Vehicles.