The High Cost of Rental Housing 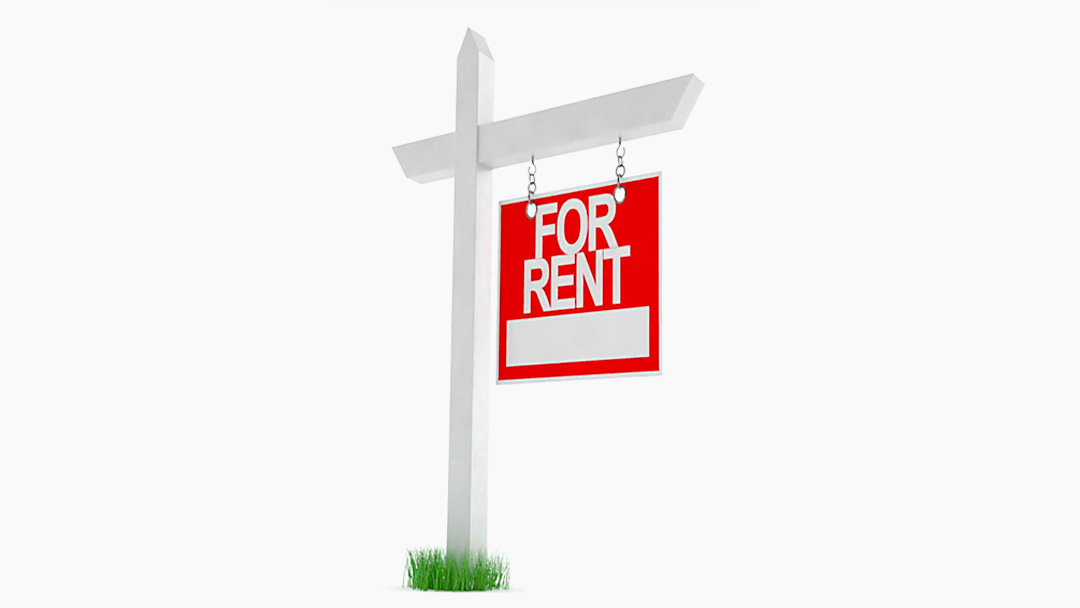 Among the most pressing issues facing metro areas and neighborhoods around the nation is that minimum wages in America cannot pay for a two-bedroom apartment anywhere in the country according to a new report.

“There isn’t a single state, city, or county in the U.S. where someone earning federal or state minimum wage for a 40-hour work week can afford a two-bedroom home at fair market rent.”
– Tanvi Misra

According to the National Low-Income Housing Coalition (NLIHC), the Fair Market Rent for a two-bedroom apartment in California is $1669. The agency noted that to afford this level of rent and utilities without paying more than the government’s recommended 30 percent of one’s income on housing, a California household must earn $5665 per month assuming a 40-hour work week.

California is not an aberration. According to NLIHC, there are only 22 counties in the entire country where a one-bedroom is affordable to an individual working a 40-hour work week and earning the federal minimum wage. 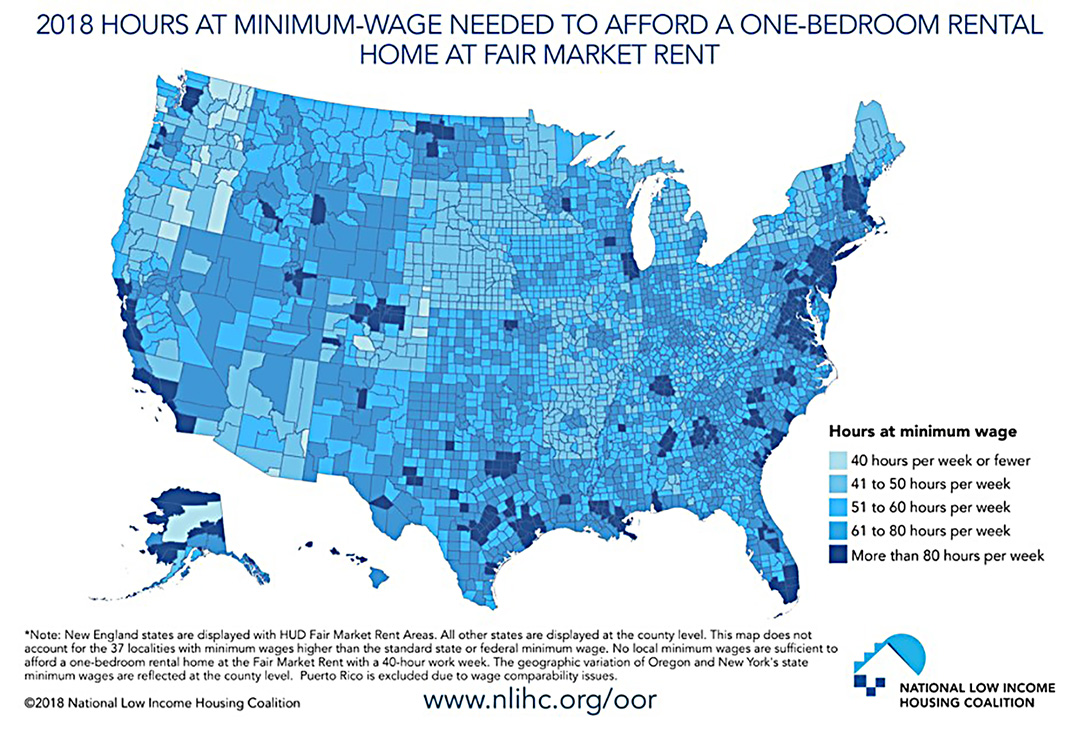 As wages remain repressed, housing stock is at a premium in several places around the nation, including here in the inland region, which tends to drive up rental prices.  It would also be a mistake to believe the cost of housing is only a concern of the poor. The hourly wage of the average renter in this country is $16.88. At that rate of pay, on average only 11 percent of renters in each county across the nation can afford a two-bedroom and about 43 percent on average can afford a one-bedroom.

There is a nexus between a living wage and affordable housing. Keep in mind, however, there are widespread geographical differences in rents and wages across the country with hourly pay rates required for a two-bedroom apartment ranging from a high of $60.02 in San Francisco to a low of $15.60 in Little Rock, Arkansas.

Despite the increased demand for affordable housing to meet the needs of the working class, the  Joint Center for Housing Studies at Harvard University reported most of the new units developed across the country over the last ten years were found to  actually cater to the rich. For example, between the years 2005 and 2015, the number of apartments that cost $2,000 and more per month increased by a whopping 97 percent, while units under $800 decreased by two percent. Housing advocates believe the nation’s most economically vulnerable are largely being overlooked.

The report hypothesized that part of the nation’s ability to progress in its provision of affordable housing will require the support of government subsidies. Yet, the priorities of the current administration to date, do not include a focus on affordable housing. The budget for the Department of Housing and Urban Development (HUD) received a minimum budget increase in 2018, but it remains 28 percent below 2010 funding levels. At this point, it appears doubtful that additional help will come from this agency in the near term.

The current administration has proposed massive cuts to H.U.D. and in alignment with the president’s goal in this regard, H.U.D. Secretary Ben Carson has proposed raising rents for those who receive housing assistance while at the same time, imposing mandatory work requirements. If the Carson proposal is successful, those receiving housing assistance could have to pay up to 20 percent more for their rent.

In the Inland Empire, economic growth has outpaced growth in the rest of the state. In May, in recognition of the ten-year anniversary of the Great Recession, the UCR School of Business published a report focused on the region’s housing market.

The report noted, “. . . there are no signs of a bubble in sight and this year may be the best opportunity in a long time for first-time buyers and others to become homeowners.”

The area’s housing market has experienced steady gains since recovery from the Great Recession began in earnest. Housing prices in the area have doubled since 2011, and according to the report, several inland communities will surpass their pre-recession price peak sometime this year. 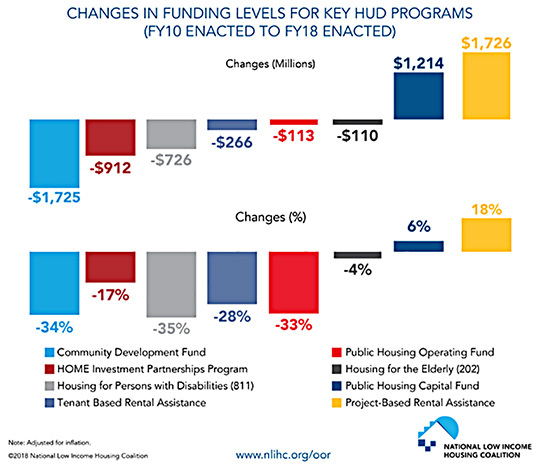 Despite this news, Executive Director of Research at the UCR’s Center for Economic Forecasting and Development and the report’s author, Robert Kleinhenz, stressed how the local housing market has under-performed in the current expansion. He noted, “While home prices have risen, home sales have moved sideways in recent years and construction has fallen short of needs.”

The high number of foreclosures experienced during the Great Recession turned many former homeowners into renters. The report noted the impact this has had on the rental market. Interestingly, the number of renters living in single family homes increased by a whopping 56 percent between 2006 and 2016. This increased the share of renters among all single-family units from 17 percent to 25 percent. The increased demand for rental units drove the average vacancy rate for apartments in the region down from 8.4 percent in late 2009 to less than 3.0 percent by 2014.

The report further highlighted how traditional renters in the area coupled with home owners-turned-renters in the wake of the recession has been further complicated by the region’s population growth. Growth in the area advanced more quickly than the rest of the state once the region’s economy began to grow again placing more pressure on the local housing market.

The good news for the inland region is that new home construction rose by one-fifth last year as permits for both single-family and multi-family units hit their highest levels in 10 years, and permit levels this year are projected to surpass last year’s counts.

In addition, the UCR report projected an increase in job growth and income that will hopefully help offset the rising costs of housing. The other good news for the inland area is that the region continues to enjoy a strong “affordability” advantage over its closest neighbors—Los Angeles, Orange, and San Diego Counties.