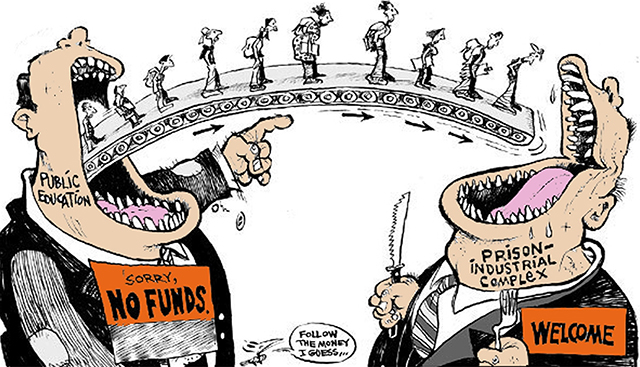 Illustration from the Youth Justice Coalition

On Saturday, members of the community joined representatives of the San Bernardino County Unified School District at a town hall meeting focused on reversing the flow of students from schools to prisons via the notorious school-to-prison pipeline. The session was held at the district’s Del Vallejo Middle School located at 1885 E. Lynwood Drive in San Bernardino.

The term, school-to-prison pipeline is used to describe the concerning national trend of minority students, primarily black and brown boys and girls who are funneled from public schools into the juvenile and criminal justice system.

The overall trend is largely attributed to educational practices that evolved over the years focused on zero tolerance policies that, according to the American Civil Liberties Union, criminalize minor infractions of school rules that in many instances are further exacerbated by on-campus police who often involve the criminal justice system in issues that many believe should rightly be resolved within the confines of the educational system.

During the session, those on the panel focused on the importance of everyone working together on this issue, in addition to the importance of listening to the students. Saturday’s meeting also led to the establishment of a committee that will respond to community concerns related to the school-to-prison-pipeline.