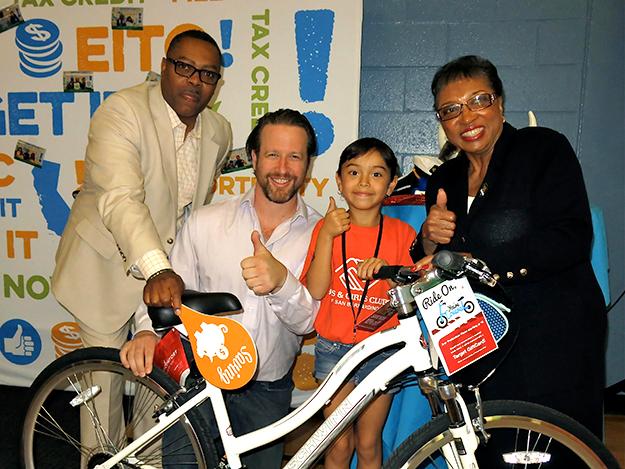 A happy Boys & Girls Club member with her new bike is joined by A. Majadi, Joe Sanberg, and Assembly member Cheryl Brown.

It was all smiles and laughter at the Boys & Girls Club this weekend – both in San Bernardino and in Perris – ironic considering the reason people were there was to have their taxes prepared. Yes, it was tax prep day at two of our local Boys & Girls Clubs, part of CalEITC4Me’s outreach campaign informing California residents of the state’s first Earned Income Tax Credit for low income workers. I’m proud to be a partner in the effort led by entrepreneur Joe Sanberg, founder of Golden State Opportunity and chairman of the CalEITC4Me public/private partnership.

Combined, the events in the Inland Empire attracted well over 1,000 people. In San Bernardino, a resource fair that included medical screenings, utilities assistance, a farmers market, and lunch accompanied the tax prep. Children played in the Kids Zone while their parents worked with highly skilled volunteer tax preparers to complete their taxes before the April 18th deadline. Some people, like Suzie Morris, learned that instead of owing money, she was getting back twice as much as she thought she owed. “I’m a happy girl,” she said once she heard the good news. 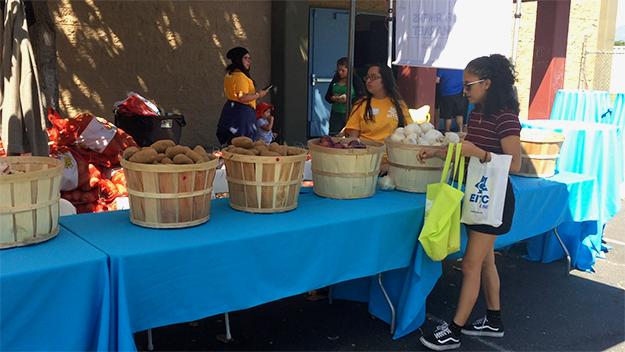 The farmers market at the Boys & Girls Club of San Bernardino.

Throughout the day, there were prizes and giveaways. Some kids ran around the gym floor when they heard their names called. One teenager won a new bike and promptly gave it to his friend. He told us his friend’s bike had recently been stolen and he wanted him to have it. Organizers gave him gift cards totaling the value of the bike to reward his selflessness.

Assembly member Cheryl Brown, one of the event partners, was there to welcome families. Colton School board member Randall Ceniceros and San Bernardino County School board member Hardy Brown II stopped by to join in the fun. In Perris, City Councilmember Tonya Burke was an event partner and her colleague David Rabb talked to families as they ate tacos from Street Foods Co, one of the coolest food trucks in the area…which also happens to be owned by my neighbor. 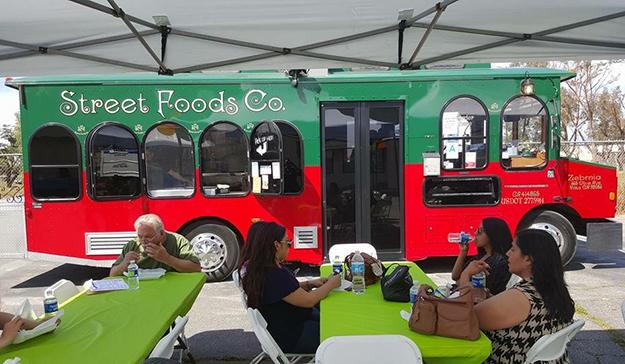 In both cities I had the opportunity to tour the clubhouses. I was not only surprised by what I saw, but inspired. In San Bernardino, executive director A. Majadi has built a professional fully equipped recording studio and dance studio. Young people have already started making music…their first song is about stopping violence in the city. In Perris, the founder and chief executive Jackie Ramos gave me a tour of her growing facility. “We have 443 members,” she proudly said as she pointed out the classrooms, playroom, and reading room. Independently operated and governed by their own boards, the Boys & Girls Club provides supervised and structured afterschool programming for those important hours between 3-6pm, when kids are out of school and parents are still at work. It’s a time when young people often get into trouble with petty crime, drugs, and alcohol. The Club is a vital community asset and I’m thankful that they partnered with us to host the tax prep events. There were no sad faces this weekend at The Club, only joy and happiness.

Please visit the CalEITC4Me website to see if you qualify for free tax preparation or the new California Earned Income Tax Credit. And the next time you’re driving by your local Boys & Girls Club, drop-in and see how you can get involved. They are always looking for new partners, volunteers, and of course donors.