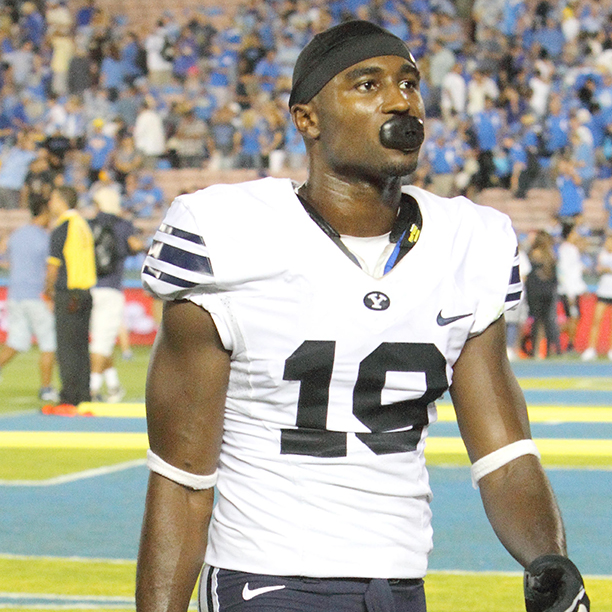 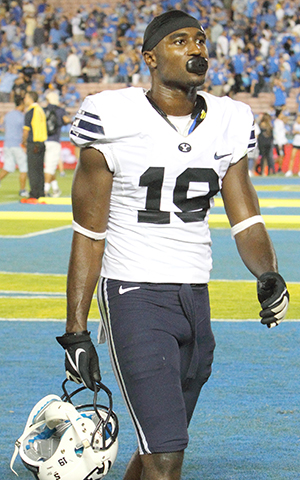 Former Fontana Summit Star Devon Blackmon leaves the field on Saturday after BYU’s 24-23 loss to the Bruins at the Rose Bowl. Blackmon has become an integral part of the BYU offense as a receiver and kick return specialist. Photo by: Robert Attical

UCLA head Coach Jim Mora described Saturday’s win over BYU as “a great game to win because of the way we won it.” I will explain. Given an opportunity, college coaches could easily become politicians. They can put a positive spin on any situation.

Example: “This is the kind of game that is really good to win because it helps you later on down the line. There are unseen benefits to this kind of win,” said Mora.

Translation: Whew! We dodged a bullet and I hope our players realize that and respond according in the future.

After cruising past Virginia and UNLV by a combined score of 71 to 19, the #10 ranked Bruins knew that #19 BYU would be a much tougher challenge. But they didn’t expect to see the offense get pushed around like it did.

Josh Rosen struggled most of the game. After starting the season like an experienced veteran, UCLA’s young signal caller reminded everyone that he is a freshman. Rosen was 11 of 23 for 103 yards and 3 interceptions. Ouch.

It is relative standard operating procedure to gradually ramp up the competition leading into conference play. It’s a proven strategy, so then that end Mora comments are sincere. Getting to conference play unbeaten is a win.

The Cougars are physical bunch with a huge front line, a 22-year old freshman quarterback and great speed at the skill positions. One of those speedy receivers is Former Fontana Summit’s Devon Blackmon who has become an integral part of the Cougar’s game plan.

So it is no surprise that the Cougars put up a good fight. But what was surprising and also should be a little disturbing for UCLA is the meager numbers posted by the Bruins’ offense.

With the exception junior tailback Paul Perkins, the Bruins’ offense didn’t have much to add up at the end of the evening. Perkins rushed for 219-yards on 26 carries and 1 touchdown and basically saved the day for UCLA.

I get Mora’s explanation and to a certain extent agree with much of his overly positive analysis. But reality has a way of breaking through no matter how much brightly colored paint you put on the situation. Your quarterback is a freshman and good defenses will continually attempt to capitalize on his inexperience.

With Rosen struggling, UCLA played most of the game from behind torturing the 67,612 fans in attendance. But with only 6:23 left in the game and trailing 23-17, the Bruins offense studied itself and pulled of a scoring drive to take the lead at 24-23.

The Cougars were not finished yet. With less the 3:00 remaining Tanner Magnum completed passes to multiple receivers including Former Fontana Summit’s Devon Blackmon moving the Cougars just short of field goal range. On his next attempt Magnum’s pass was intercepted by Myles Jack ending the Cougars chances and keeping the Bruins undefeated.

UCLA travels to Arizona this week to begin conference play against the Wildcats. If Mora’s wishful assessment is correct, the Bruins’ more talented squad will prevail and get off to a great conference start.

But, if the Wildcats are successful in exploiting (and you can bet they will try) Rosen’s inexperience prepare yourself for a new even more positive story.

Gary Montgomery can be reached at gmontgomery@att.net