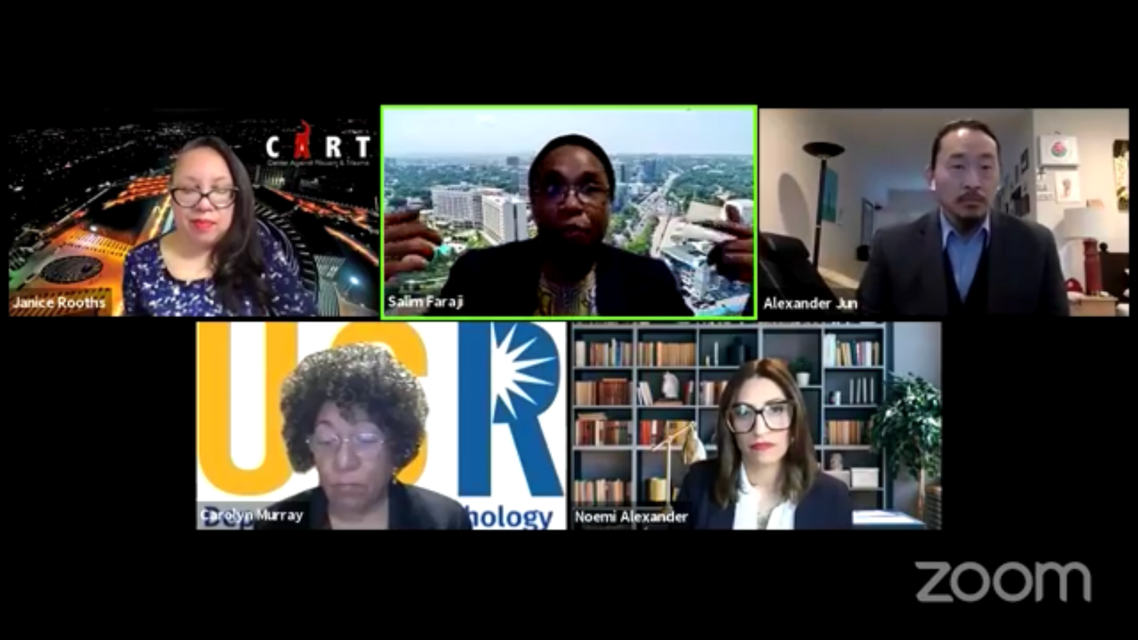 The Center Against Racism and Trauma Anti-Racist Summit

An explicit spike in hate crimes could no longer go unnoticed to groups throughout the Inland Empire uniting to annihilate racism.

The Stop AAPI Hate National Report and California State University of San Bernardino’s Center for the Study of Hate and Extremism documented over 3,000 AAPI hate crimes with a 145% surge in one specific demographic since the start of the pandemic.

The Center Against Racism and Trauma (CART) spearheaded their first virtual Inland Empire anti-racist summit March 17 in collaboration with Ibram X. Kendi, an American author and historian of race and discriminatory policy in America, to dismantle present-day dogma around racism.

“Indeed we have White male supremacists who are engaging in acts of terror not only in the AAPI community, but against Latinx Americans, against Black folks, against Jewish Americans, against women,” Kendi said. “You name the group and they are being subjected to this terror. Then we have police officers taking the word of somebody who just murdered eight people and who somehow imagined that this was the result of a bad day as opposed to his lethally racist ideas.”

The night before the summit on March 16, a  21-year-old White man killed eight people, six of whom were Asian women. The suspect on this killing spree specifically targeted three massage parlors in Atlanta, Georgia.

Jay Baker, Cherokee County Sheriff’s Office captain, said during a news conference the following day the shooter was a “sex addict” and pursued a murderous rage to rid his temptations by “eliminating” massage spas. Baker said this was just a result of a “really bad day.”

The virtual discussion, hosted by Corey Jackson, director of CART, accumulated over 2,500 views on Facebook.  He said the goal was to establish a correct and current understanding of racism, find our role in this movement and declare the Inland Empire a “no-hate” zone.

“We will not accept racism as a part of our culture, our institutions and our policies,” Jackson said. “It is our hope that you are here because you are an anti-racist or would like to become one, which means you are committing yourself to actively destroy racism in the region we call home.” 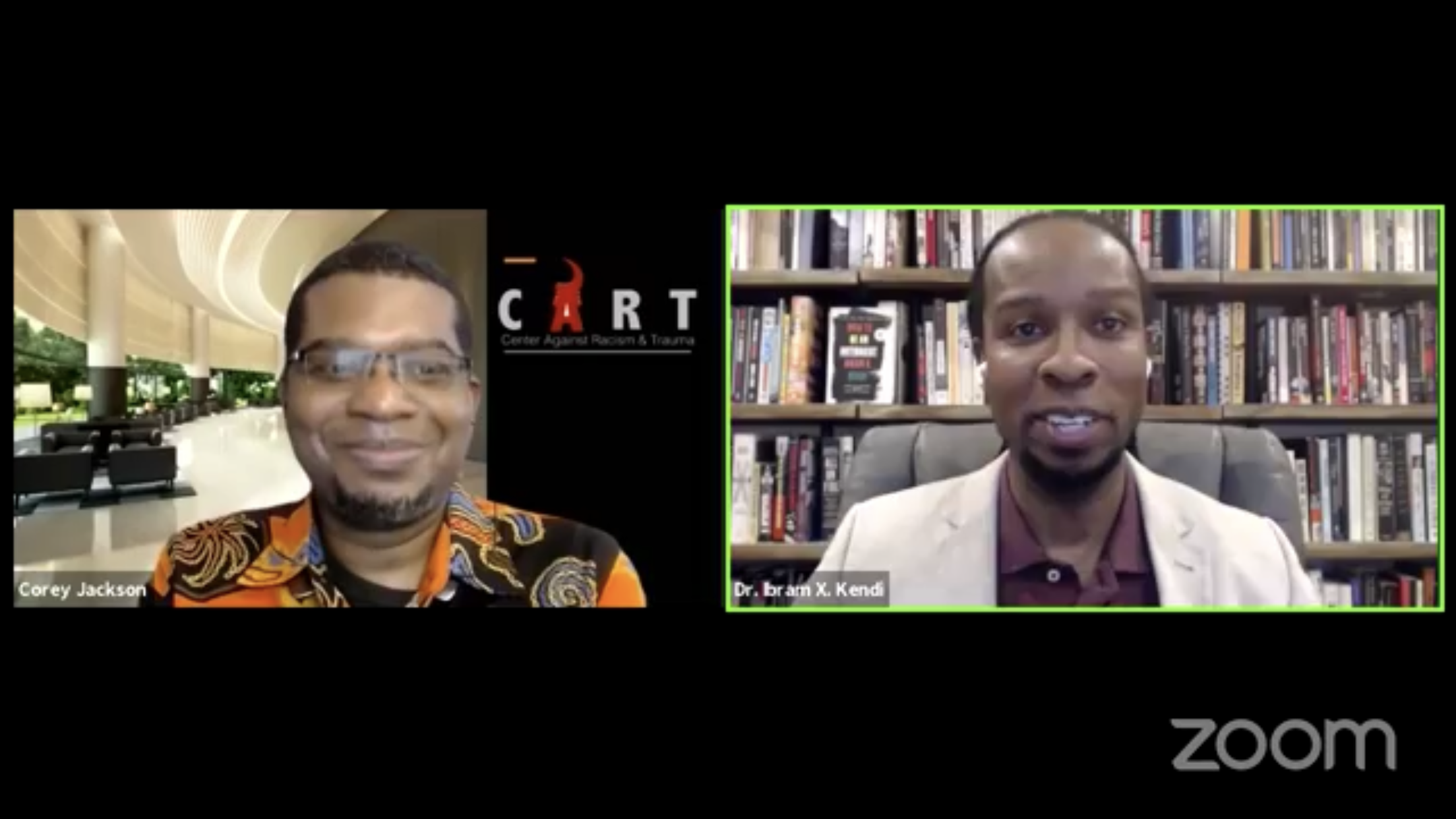 Racism at its core is systemic

Kendi declared those who do not believe racism exists could not define racism without referencing racist ideology.

“Ironically— you find the only way in which people can claim that racism doesn’t exist is by expressing racism,” he said. “That’s the irony.”

Racist policies are any measures that lead to racial inequity and injustices. Using voter suppression policies as a primary example, Kendi believes laws and policies have disproportionately made it harder for Black, Brown and Indigenous people to vote.

The American Bar Association reputed the Voter ID laws from the previous election had “underlying racial biases” that caused restrictions as a result of systemic discrimination, disclosing African Americans and Hispanics had trouble finding polling locations at triple the rate than White respondents.

Kendi said he often hears the response, “well, there’s something wrong with those voters,” to which he retorted is an example of racist ideas as opposed to “the normality of oppression and inequality.”

Racist ideas, he explained, are any concepts suggesting one racial group is superior or inferior to another group in any way.

The answer he heard most is “because of their behavior” revealing another pattern of racist ideas, he said.

“To understand racism —which is inherently systemic we should understand that it’s this powerful collection of racist policies that lead to racial inequities and injustices and are substantiated by racist ideas,” he said. “That’s racism.”

What does it mean to be an anti-racist

Kendi declared to be an anti-racist is first to understand that racism is taught, and more specifically, that people are taught to deny its existence altogether.

Supporting policies that maintain racial injustice and argue that it “does not stem from racist ideas,” Kendi promotes is part of a larger system of reinforcing racial ideas.

He indicated several policies that discreetly maintain racial inequality and injustice in housing, criminal justice, the economy and health. Pointing to the recent event in which the Riverside County Board of Supervisors delayed approving a resolution that would have supported the removal of involuntary servitude without exception.

Since its introduction Feb. 1, the resolution that aims to disconnect underlying vestiges of slavery from the California State Constitutionhas been delayed for a vote three times.

“As Ava DuVernay brilliantly sort of showed in her film 13th,” Kendi said, “when slavery ended, the law replaced the master and the prison replaced the plantation.”

Kendi acknowledged being an anti-racist may be difficult for some who don’t want to “rock the boat.” He emphasized the discomfort of challenging the current portrayal of race is the only chance to heal society.

What can individuals do to fight racism

The panel that followed Kendi’s discussion analyzed things individuals can do to fight against racism.

Murray and Jun acknowledged education promulgates racial ideology, whether intentional or unintentional. They urge to dissociate from miseducation and still acknowledge the impact on the relevance of today’s fight against racism.

“We need for some of us, re-education, for others of us, remedial education,” Jun said. “There’s formal learning through books that you can do and also informal, challenging even modern day assumptions and being able to hear other narratives, not the dominant narrative that continues to drive and feed American society.”

In addition, Hernandez declared that all operations take the time to investigate practices and policies. She stressed immediate action toward checking with volunteers all the way up to the executives and asked: ‘What does racism look like in our organization? Who do they hurt? Who do they advantage?’

“And if you find out that some of your benign general non-race related policies have race based outcomes and consequences, then we do the brave work of creating race based solutions, and most importantly resist,” she said.

Hernandez explained to “resist” is to steer away from focusing on “fixing the offended party.”

“Historically, the solutions offered to correct racial disparities have continuously been to try to fix the oppressed and the powerless, as if there’s something innately wrong with that,” she said. “This is like watching the sun go down and blaming the house for getting dark instead of asking, did the owner pay the light bill?”