The Resurgence of Hate 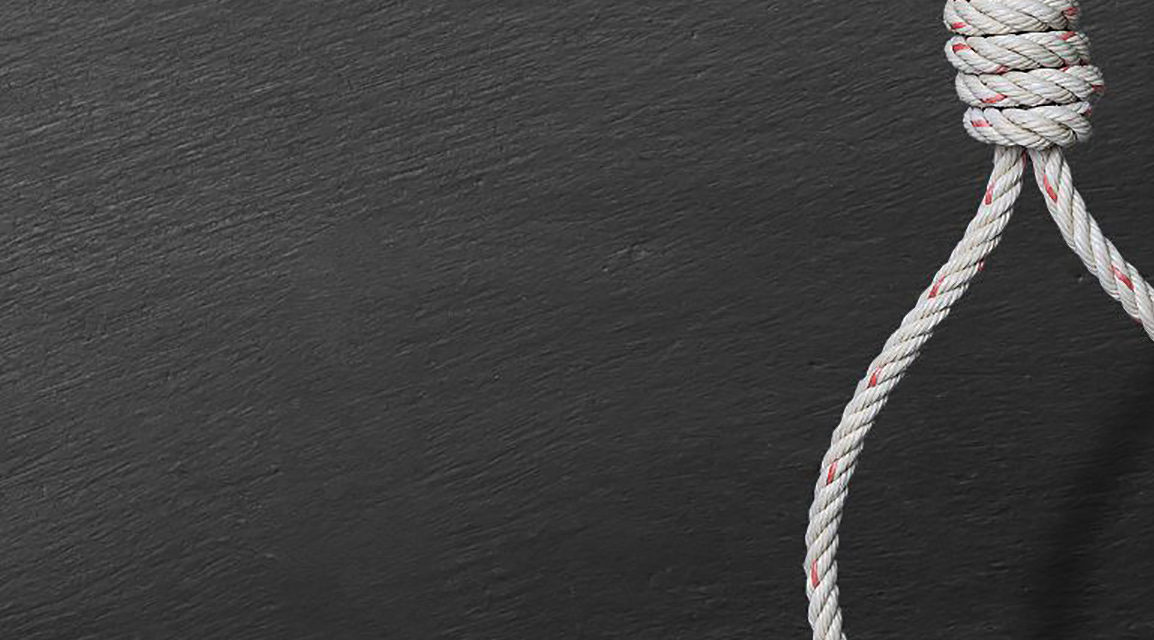 A recent spike in incidents involving nooses found at prominent locations around the country has unnerved the African-American Community fearing a rise in violence from White Supremacist Groups.

According to the Anti-Defamation League, the hangman’s noose is “one of the most powerful visual symbols directed against African-Americans,” its origins harkening back to the days of slavery and the Ku Klux Klan; it is used to “intimidate or harass.” 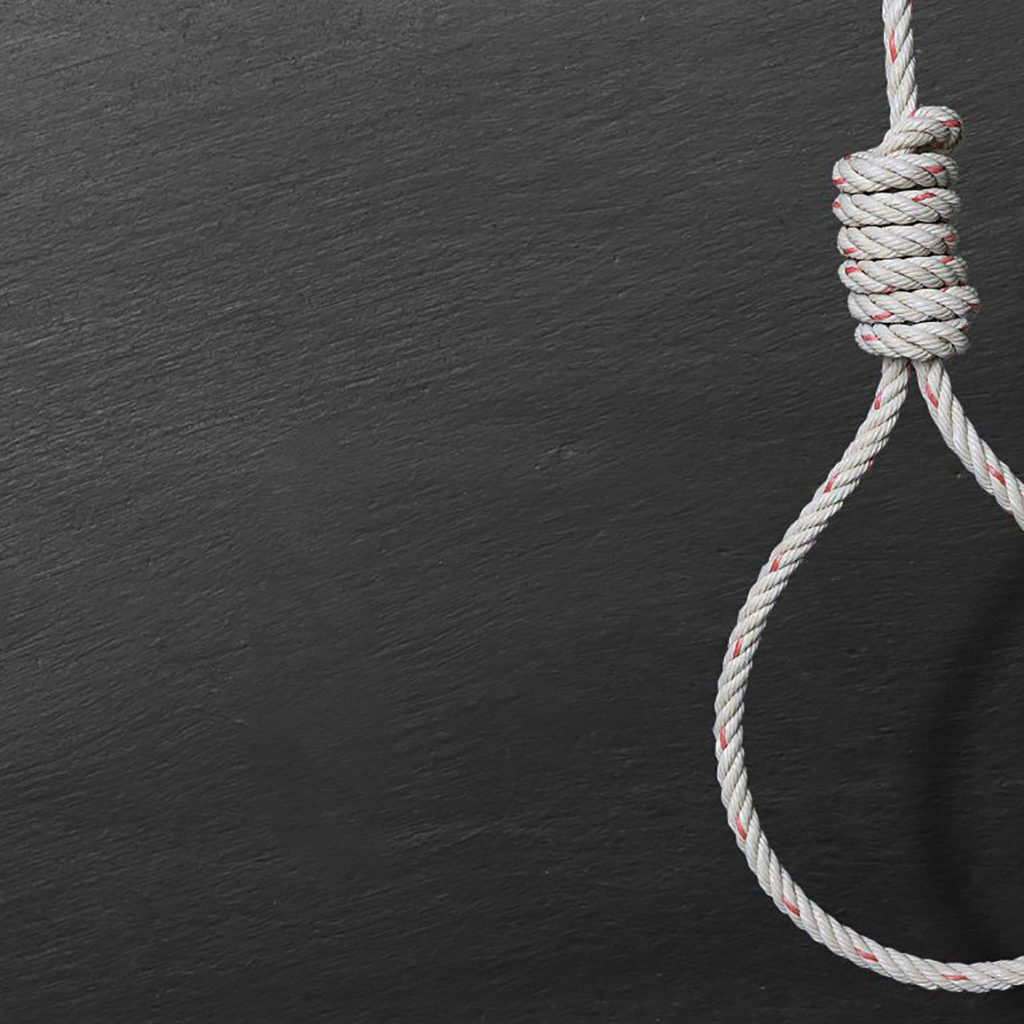 On or about May 30, one such incident was reported to The Voice/Black Voice News. It occurred on an elementary school bus headed to the Valley of Enchantment Elementary School in Crestline in the San Bernardino Mountains.

Three anonymous sources reported that several elementary school children were found on the bus playing with and dangling a Black baby doll from a noose. The bus driver confiscated the noose and doll, and it was turned into the Rim of the World Unified School District’s (ROWUSD) Transportation Office.

After the doll and noose were confiscated, it was taken by an unknown district office employee and hung on a curtain at the office where anyone entering could view the display. According to an anonymous sources close to the district, the display hanging from the curtain went on for several days while verbal complaints were ignored.

Upon entering ROWUSD’s Transportation Office, a Caucasian woman viewed the Black doll hanging by the noose on the curtain, became incensed by its open display, and, according to sources, plans to file a lawsuit against the school district.

ROWUSD administration has been close-lipped on the matter, describing it as an “employee disciplinary matter” and refused to comment further due to employee privacy rights while explaining the district “takes these matters very seriously.” 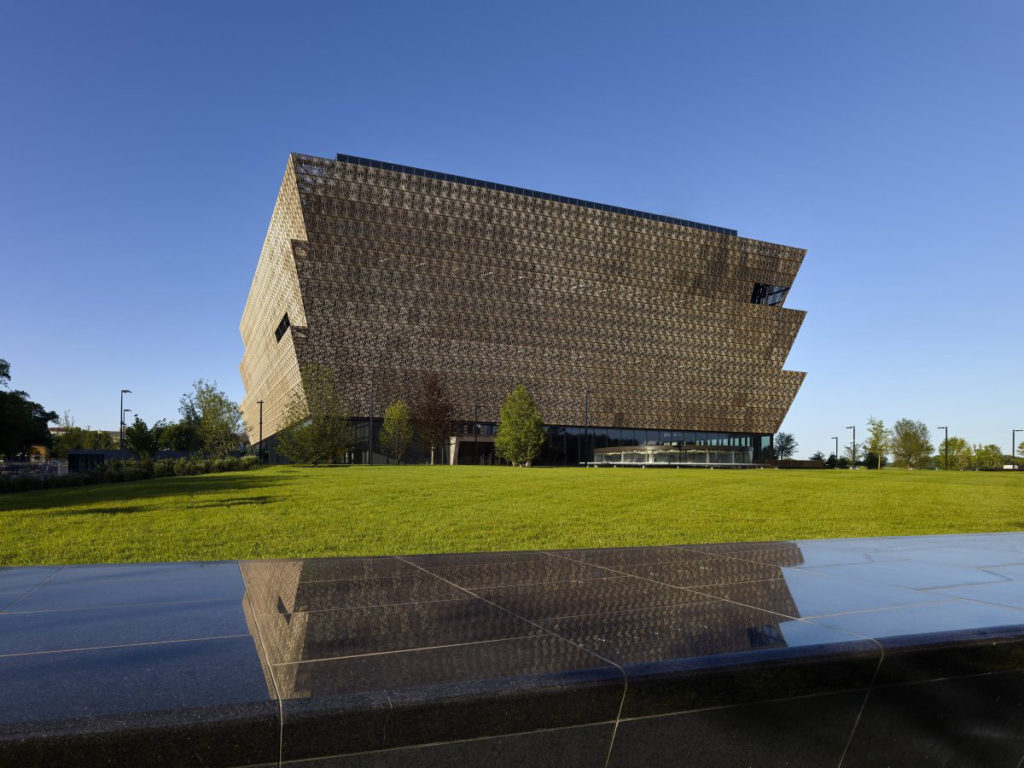 June 1 a noose was discovered at the African American History Museum of History and Culture, 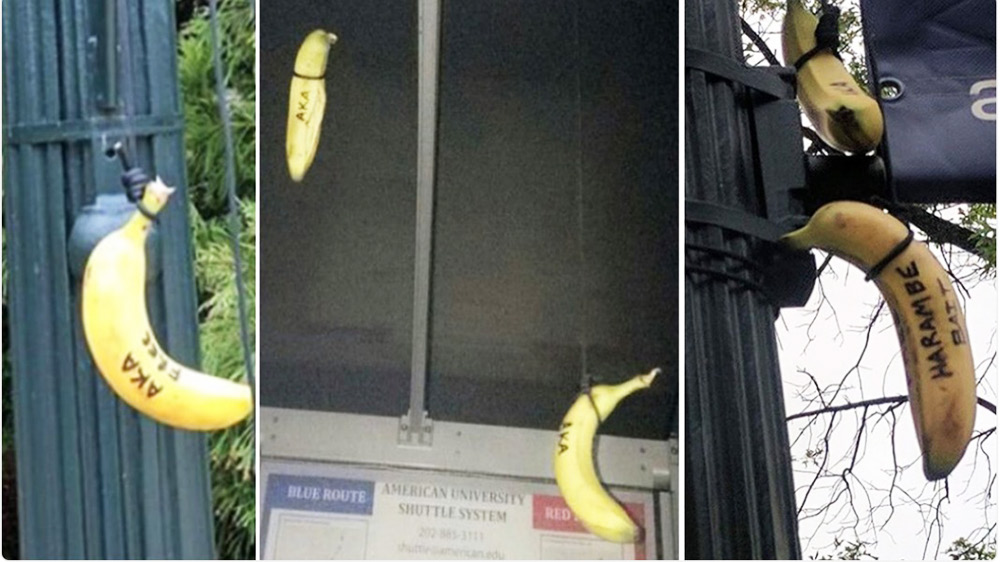 May 1, bananas were found a various locations at American University in Washington D.C.,

May 26, a noose was hanging from a tree anear the Hirshholm Museum in Washington D.C.

A Special 2016 Status Report on Hate and Extremism in California released by the Center for the Study of Hate & Extremism, California State University, San Bernardino, found a “significant” 14 percent increase in hate crimes in California’s largest cities.

The report explained “these increases exceed those found nationally” with the state “poised for its first consecutive yearly increases in hate crimes in two decades.” A graph in the report shows the highest number of hate crimes occurring in the City of Los Angeles, followed by San Francisco, San Diego, San Jose, Sacramento, Fresno, Long Beach, Bakersfield, and Anaheim. 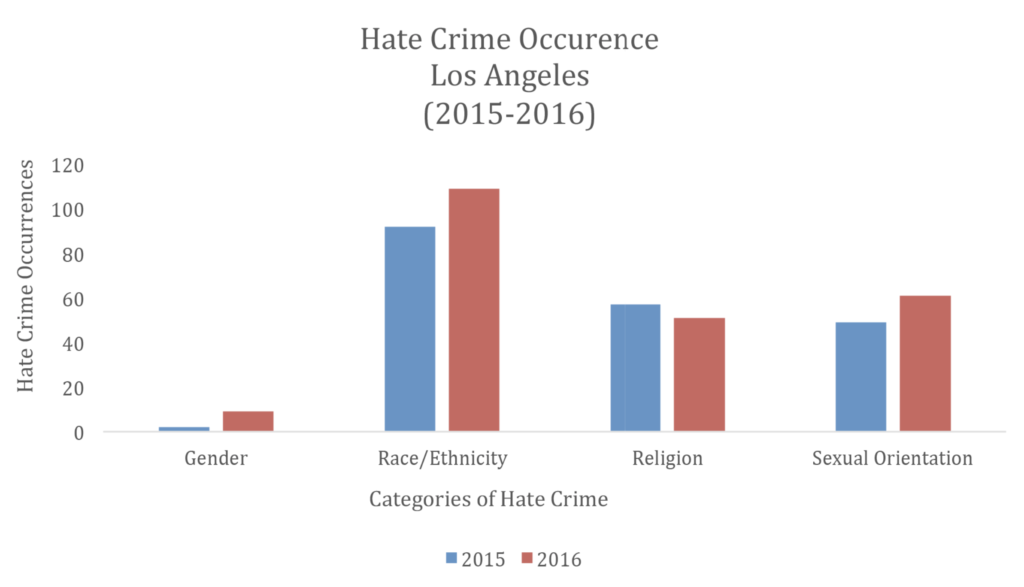 Source: Special 2016 Status Report on Hate and Extremism in California 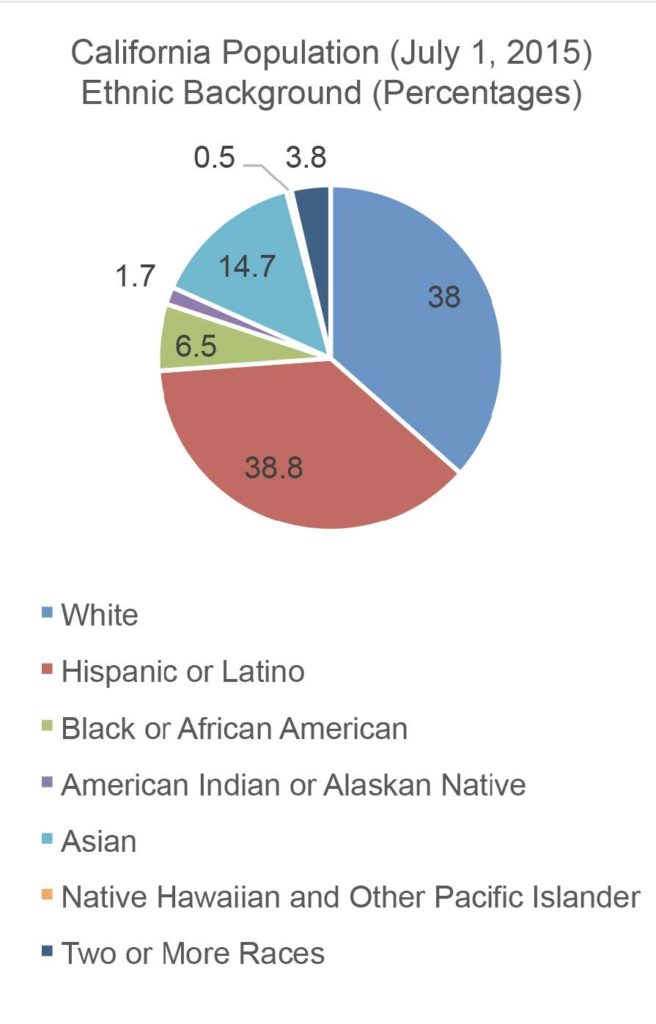 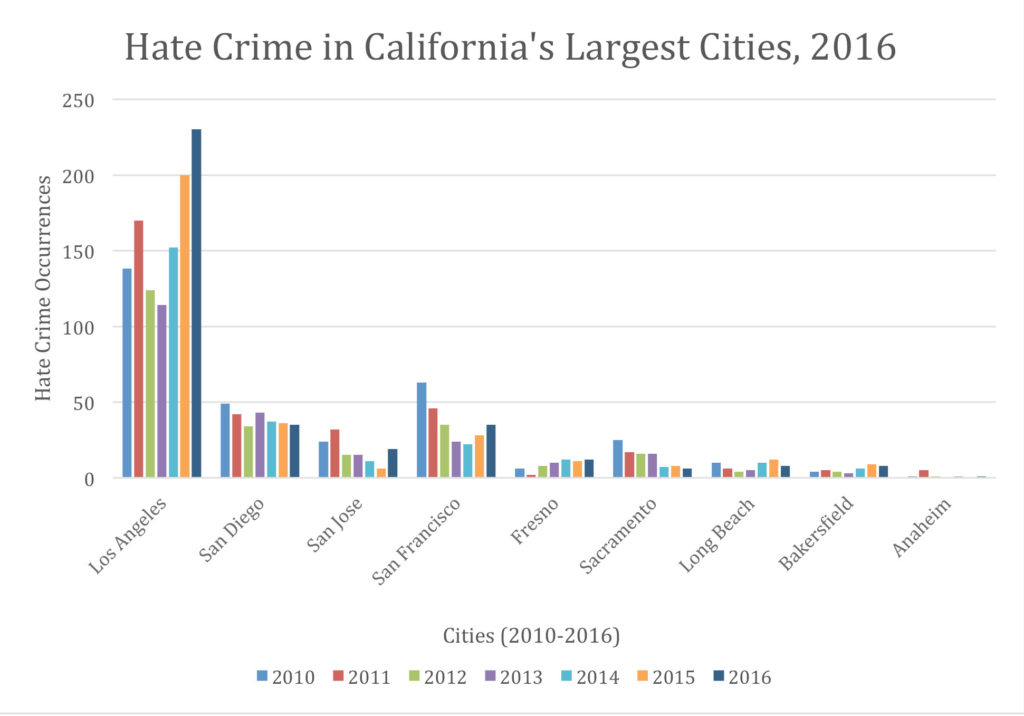 The report found “only a small number of hate crimes were prosecuted” as hate crimes with 285 cases out of 837 reported incidents referred to prosecutors, resulting in 119 convictions.

The fourth quarter of 2016, after the November 8 election, found a 29 percent increase in hate crimes, compared to the previous year, according to the Center for the Study of Hate & Extremism Report. Additionally, California experienced an increase in violent public demonstrations, as well as an increase in recruiting at colleges by racist organizations.

According to the report, the Southern Poverty Law Center, a Montgomery, Alabama civil rights group found 79 hate groups operating in California in 2016, the “most of any state in the union,” up from 68 the previous year, a 16 percent increase. To obtain a copy of the report visit: https://assets.documentcloud.org/documents/3678892/CALIF-RPT-1.pdf.

The California State Attorney General’s Office report on hate crime in California revealed race/ethnicity/national origin bias are “consistently the most common type of hate crime over the past ten years” with the most common hate crime having an “anti-Black bias motivation.” The report can be obtained at: https://oag.ca.gov/sites/all/files/agweb/pdfs/cjsc/publications/hatecrimes/hc15/hc15.pdf.

Hate crimes in California are defined under Penal Code section 422.55 as a “criminal act committed” because of actual or perceived characteristics of the victim, including race or ethnicity, disability, gender, nationality, religion, sexual orientation, or association with a person of those characteristics.

Penal Code section 422.6 makes it a crime to, by force or threat of force, willfully injure, intimidate, interfere with, oppress, or threaten any other person or deface, damage, or destroy real or personal property for the purpose of intimidating or interfering with the free exercise or enjoyment of any right or privilege guaranteed under the laws of this state or by the United States Constitution.

A request for comment to the San Bernardino County Sheriff’s Department by The Black Voice News/The Voice went unreturned as of press time.