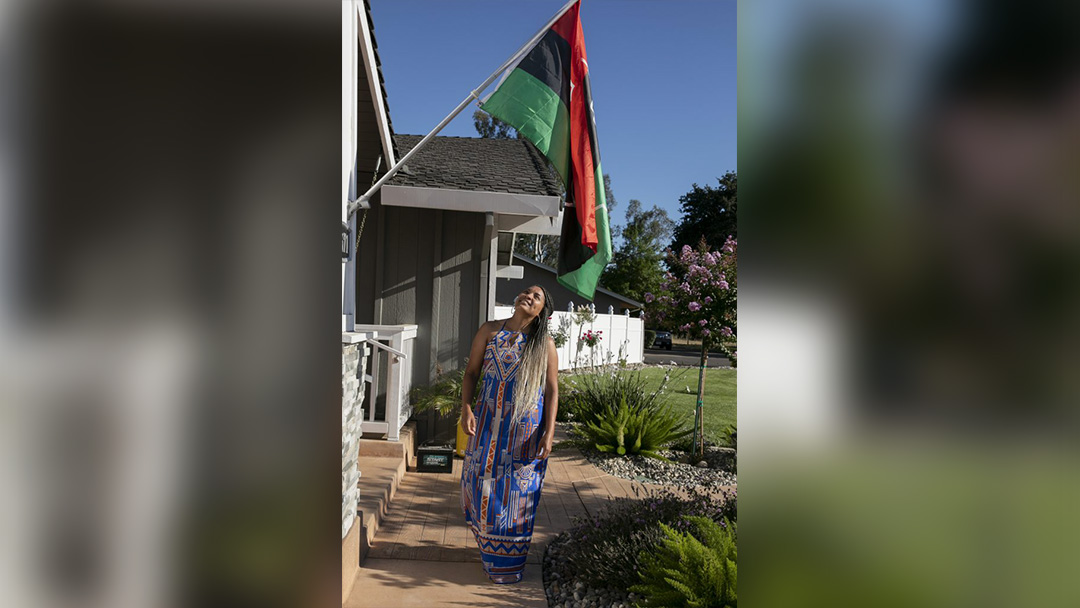 (CALMATTERS) – In a quiet corner of Elk Grove, where the maze of subdivisions and shopping centers gives way to open fields, Sharie Wilson has spent the last three years building her dream home.

It’s nothing like the neighborhood where she grew up in South Central L.A. But in this Sacramento suburb, her family owns a modern farmhouse set on 2.5 acres, with a stately U-shaped driveway and a Pan-African flag over the front door. In the backyard, there’s a basketball court inlaid with the logo of her hair care company, DreamGirls.

Still, Wilson has to justify her family’s success. Neighbors have asked her husband, who works at the local water district and runs his own apparel company, what sport he plays. Or how the couple really paid for their house. “Hopefully once people keep seeing it, they stop seeing the color and start seeing us as humans,” said Wilson, a 41-year-old mother of six boys.

Wilson is one of around 275,000 Black Californians who have left high-cost coastal cities in the last three decades, sometimes bound for other states or cities, but more often to seek their slice of the American dream in the state’s sprawling suburban backyard. Many transplants pack up for the promise of homeownership, safety and better schools. Housing-rich Elk Grove has gained nearly 18,000 Black residents since 1990 — a 5,100% jump mirrored by increases around the San Joaquin-Sacramento Delta, Southern California’s Inland Empire and the Central Valley.

At the same time, Black renters have been disproportionately forced out of cities as costs and evictions climbed; the Black population has plunged 45% in Compton, 43% in San Francisco and 40% in Oakland. While a version of this geographic scramble is playing out for working and middle-class people of all races, the distinct obstacles that Black residents encounter in new communities raise the question: How far do you have to go today to find opportunity — and are some things ever really possible to leave behind?

“Part of what we’re seeing is the kind of anti-Black racism that has followed Black folks wherever they go,” said Willow Lung-Amam, an associate professor of urban planning at the University of Maryland. “You still face the same kind of structural barriers.”

In adopted hometowns, Black Californians face newer, subtler forms of segregation. Old regimes of legal housing and job discrimination have given way to predatory loans, shifting patterns of disinvestment and flare ups of racism or violence in areas that once promised a level playing field, reports from UC Berkeley, UCLA and social services groups have found.

Now, as Black Lives Matter protests collide with anxiety about COVID-19’s disproportionate Black death toll and anxiety about a coming wave of evictions, at issue is whether these overlapping crises will accelerate California’s Black exodus or force a reckoning both inside and outside major cities.

By 2017, after years of working a day job in sales and doing hair late into the night, her own salon in Old Town Elk Grove was thriving. She went back to L.A. often to dream up business ideas with her sister and make sure her kids weren’t too far “out of the loop” on Black culture. But one day, a stylist at Wilson’s salon found a note jammed in the door. It was riddled with racial slurs and said to “get out soon.”

“It didn’t make me want to leave,” Wilson said. “It made me want to force them to understand who I am, what I’m about, and that I add value to this community just like everybody else.”

In 2000, just before Wilson left L.A., California had the country’s second-largest Black population at more than 2.2 million people. But under the surface, a seismic shift was happening in where people lived, the opportunities they chased and the social networks they relied on.

Header Photo: Sharie Wilson stands below the Pan African flag outside of her Elk Grove home on June 22, 2020. Wilson says that she raised the flag to celebrate Juneteenth as a way to help educate her neighbors about the holiday. Photo by Anne Wernikoff for CalMatters