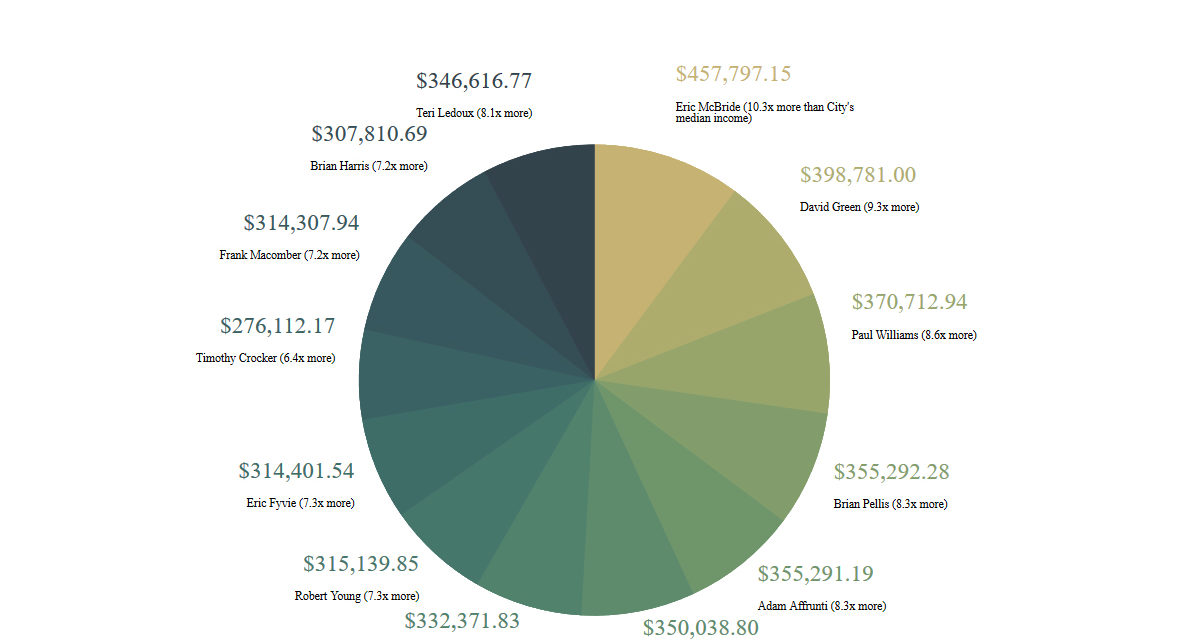 “In my opinion, Blacks cannot continue to tax themselves while White [city officials and police] continue to receive all of the benefits while living in other communities and paying no taxes [here]. To me it is worse than being a SHARECROPPER down south.”

The San Bernardino City Council voted 5-0 recently to place Measure S on the November ballot as a follow-up to the city’s 2006 Measure Z which sunsets in 2022.

The new measure will ask one of the nation’s poorest cities to increase local sales tax from .25% (authorized by Measure Z in 2006) to 1% with Measure S. The revenue will be used to fund more police officers, anti-gang, anti-crime operations, and other “urgent general fund programs.”

Unbeknownst to San Bernardino voters, it was the phrase “…urgent general fund programs,” which gave city officials carte blanche to allocate revenue generated by Measure Z at will. Now city officials seek more money to use at their discretion.

Although such measures were and are passed up and down the state, tax hawks believe voters are hoodwinked into passing them.

As reported by the IE Voice in July 2016, when Measure Z passed in 2006 with 67.1% of the vote, its partner Measure YY also passed. YY asked voters the following question, “. . . If Measure Z is approved by the voters, shall the proceeds of Measure Z be used only to fund more police officers and support personnel and to fund anti-gang and anti-crime operations, including drug resistance education and supervised after-school youth activities?” Measure YY passed with an overwhelming 75.2% voter approval.

What voters usually do not understand according to Howard Jarvis Tax Association (HJTA) is, “In an effort to circumvent the two-thirds vote requirement for special taxes, some cities and counties have placed majority vote, general sales tax increase measures [like San Bernardino’s Measure Z] on the ballot along with a companion advisory measure [like San Bernardino’s Measure YY] ‘advising’ local officials how to spend the tax proceeds without actually dedicating the tax proceeds for the “advised’ purposes.  Herein lies what HJTA and others believe to be a trap for voters.

The Deceptive Language of Measure Z

Although the language of Measure Z appeared specific and led the casual voter to believe the tax dollars would be used for the reasons specified in the measure, by including the phrase “and other urgent general fund programs,” the city thus identified it as a general tax (taxes imposed for general governmental purposes). This designation allows such measures to pass with a simple majority. In this instance, although the measure ultimately passed with more than two-thirds of the vote, the way it was written  gave city officials a measure of certainty and/or confidence in its passage because it only needed 50 percent plus one of the votes to succeed.

This approach not only allows municipalities to circumvent the two-thirds vote requirement for a special tax, it also circumvents state accountability laws designed to ensure that taxes imposed for specific purposes are spent as intended, HJTA noted.

The Masterful Illusion of Measure YY

HJTA reported Advisory Measures (like San Bernardino’s 2006 Measure YY) asks a non-binding question. According to regulations, the largest difference between an advisory measure like YY and any other type of ballot measures is, even when approved, it may not result in any change. Instead, “The advisory question symbolically makes heard the general opinion of the voting population in regard to the issue at hand [Measure Z].”

The advisory Measure YY that accompanied Measure Z in 2006 was no more than a mere suggestion to the council for how to spend Measure Z money—a suggestion some complain the city too long ignored.

The first year (2007) Measure Z went into effect, city-run community centers received only 2.4% of the funds allocated for community safety programs and those dollars did not come from Measure Z funds but instead, from the city’s Reserve Fund. This was only the beginning.

A National League of Cities report dated March 2007 noted the entire $1.6 million generated by Measure Z the first year was appropriated to the police department.

In 2016 the Inland Congregations United for Change (ICUC) called on the San Bernardino City Council to embrace the framework of a cease-fire-crime-prevention program successfully implemented in other cities by the nonprofit, Common Ground for Peace, a coalition of religious and community leaders. The ICUC also called on the city to allocate about 40% of Measure Z funding to these kinds of community-based programs.

In 2017, the city adopted the strategy known nationally as Ceasefire and in San Bernardino as the Violence Intervention Program & San Bernardino Youth Reinvestment and Development Program.

According to a summary of the initiative, “[The city] worked with the California Partnership for Safe Communities (CPSC) to secure a two-year Cal VIP matching grant through the Board of State and Community Corrections for $500,000 that provides supportive services to people at the highest risk of being impacted by violence. It is unclear whether this program received any Measure Z funding as requested by the ICUC. It also appears the city failed to embrace the organization’s request for 40 percent of Measure Z funding be committed to community-based programs.

The city also launched the San Bernardino Youth Reinvestment & Development Program in partnership with other organizations. City officials state the program received a three-year grant totaling $1 million. It does not appear to depend on Measure Z dollars either.

In advance of  Measure S(Z) appearing on the ballot in November, Measure Z committee Chairperson Reverend Martindale-Taylor presented its recommendation to the council last week.

“The Council approved the committee’s recommendation and will be holding a workshop in the next two weeks to come up with policies and procedures for formal adoption. We expect formal adoption of the agreed upon policies to come back at the first meeting in October,” said City Manager Teri Ledoux.

Regardless of the Measure Z Committee’s recommendations it is important voters remember the language used in Measure Z in 2006 will reappear in Measure S. It is the Grand-Canyon-wide-loophole, “and other urgent general fund programs,” which gave the city carte blanche over the use of Measure Z funds.

Sales tax revenues fell dramatically since the Great Recession, lower home prices and high unemployment resulted in a 26% reduction in city staff and cuts to programs and services to residents.  Since 2012 the city has entered and exited bankruptcy, outsourced some services like city fire and privatized others like attorney services, landscape maintenance, waste management services, etc.

Ledoux offered despite these efforts and in light of the current economic impacts of COVID-19, Measure Z revenue must be increased, pointing to the need for capital repairs like roads, for example, plus the need to get current on millions of dollars in deferred maintenance.

Despite these needs and budget cuts of $7.1 million to mitigate a projected $11.2 million deficit, the council wasted no time earlier this year approving 3.5 percent pay increases for police, the police chief and Ledoux.

During these triple crises—COVID-19, a failing economy and calls for cities to reimagine policing—many question the wisdom of a city that cuts services to its largely minority, poor and working class community during a time services are most needed, while ensuring salary increases for its largely White police force whose officers mainly, neither live nor pay taxes in the city.

What’s in it for Black and Brown Residents

The police department consumes 69% of the City’s Budget.

The median income of San Bernardino’s working-class community in 2018 was $41,027. Even with about 46 percent of the nation’s workers receiving a pay increase of some sort in 2019 averaging about 4% according to bankrate.com, the median income for city residents still fell below $43,000 in 2019.

The poor and working class are suffering the impacts of COVID-19. Now, they are being asked to vote for a tax increase that, based on history, will help bolster salaries of police and city officials. When salaries of these majority White officials are measured against the median income of the city’s Black and Brown residents who pay the bill, the comparison is jarring. 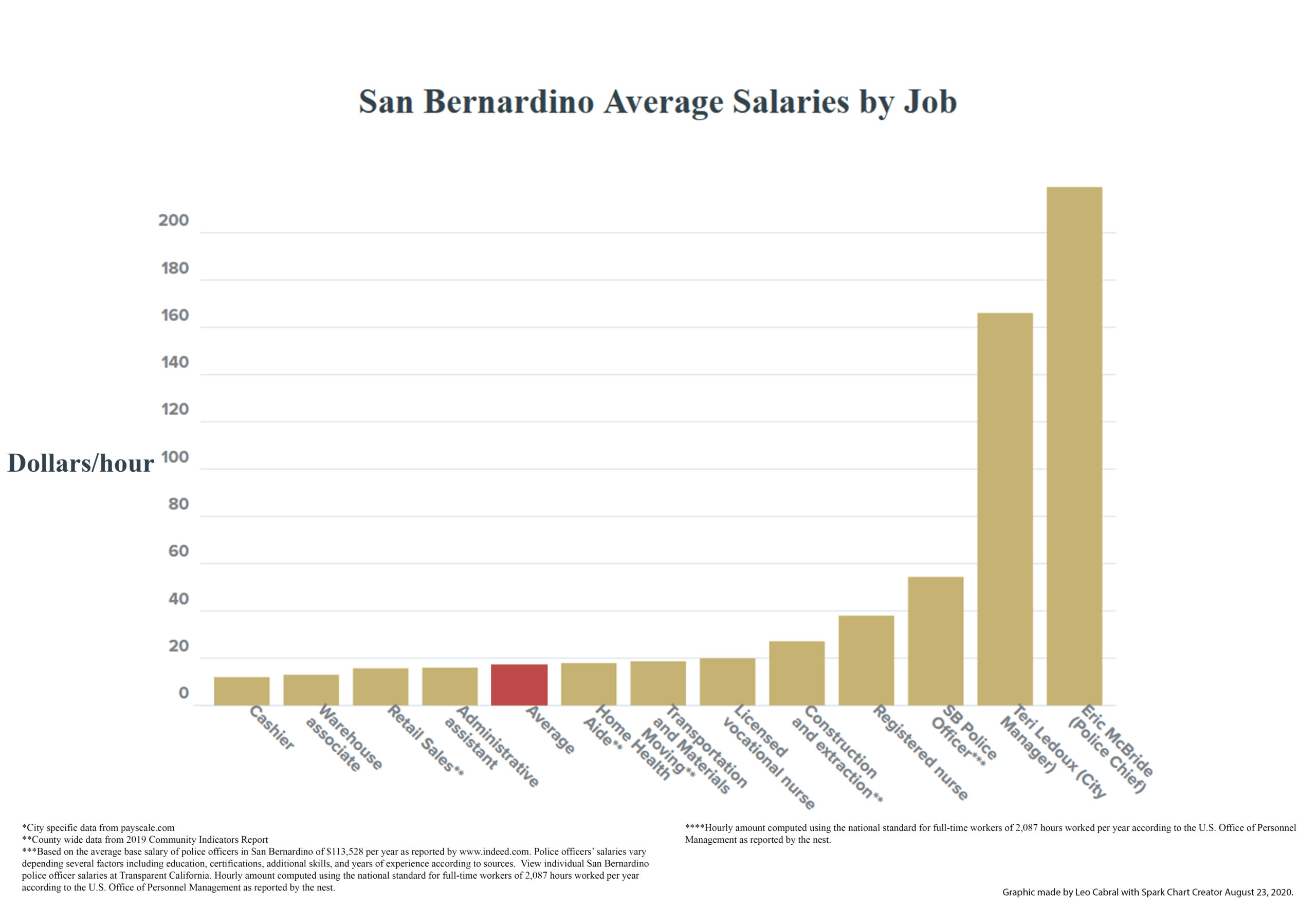 Average salaries of some popular jobs in San Bernardino.

Bishop Steven Shepard, St. Paul AME Church, San Bernardino voiced the sentiments of many in the Black community. “It takes one household 12 years to earn what the Acting Police Chief earned ($547,797.15) in the year 2019. In my opinion, Blacks [and Brown] cannot continue to tax themselves while White [city officials and police] continue to receive all the benefits while living in other communities and paying no taxes [here]. To me it is worse than being a SHARECROPPER down South.”

Shepard stressed, “I am only using the chief’s position but the same is true for 93% of the city’s staff.”

In recent years, the city was forced to slash its budget for a variety of reasons as detailed above. Officials claimed, “Without Measure Z funding, much deeper cuts would have been required in law enforcement and violence intervention program spending. . .  Therefore, Measure Z funds have enhanced, rather than supplanted, the city’s spending on law enforcement and anti-crime programs,” officials explained in council documents.

However, despite the Great Recession, the Chapter 11 filing and recovery that followed in its wake and the recently threatened $11 million budget deficit, the police department budget has remained robust.

“If our citizens vote to raise our sales tax from .25%  to a full 1%, the first $27 million will go to pay current retirees pension where very few are Black and remember the mayor wants the city to pay for his three active sexual harassment lawsuits,” stressed Shephard.

“If the tax measure is passed it will give the mayor and council the right to spend the money as ‘they see fit’ with no citizen input. I hope you share my concerns and help spread the word to [those] who live in San Bernardino, for our people to vote NO on the city’s measure to raise taxes on Nov. 3rd.”

On August 29, 2020 at 10:00 am Teri Ledoux and former Mayor Pat Morris will host a webinar on Measure S open to the public. Registration is mandatory. Click here to register.