San Bernardino’s 2020 Census Response Rate to Date is Disappointing . . . It Doesn’t Have to Be!

“If you are still looking for that one person to change your life, take a look in the mirror.”

Considering the nation’s tenuous economy and the ongoing uncertainty of what lies ahead and as municipal leaders are being forced to come to grips with too many needs and too small budgets, it is clearer than ever, we must take our communities’ destinies into our own hands.

There are many ways to get involved in creating the change desired, some requiring greater commitments than others. However, one of the quickest and easiest things we should and must do—if we have not already done so—is to take a couple of minutes to complete the 2020 Census questionnaire.

Nearly everything we face today from COVID-19 and the equity issues it laid bare; to demands for social justice; to cries for more controls and transparency in relation to the  police use of force and a greater emphasis on community based policing—all will require funding as well as planning and human resources to resolve.

Meanwhile, state, and local governments are being stretched to the max at a time when tax revenues are dropping due to a partially opened economy, high unemployment, and the relentless and devastating impact of COVID-19.

The City of San Bernardino, for example, is among many cities all over the country, at the crossroads of these multiple concerns primarily because of its large minority populations and high rate of poverty. According to 2019 census bureau estimates, the city has a poverty rate of over 28 percent and a minority community that collectively, is now the majority.

Going forward, as the nation continues to navigate through the COVID-19 crisis and considers the issues of inequity, forward thinkers are beginning to consider a framework in which a picture will begin to  emerge of how the country will change in response to current conditions eventually and hopefully reshaping issues of equity and all that contains and ultimately, what those changes will mean for society and of course, the economy. 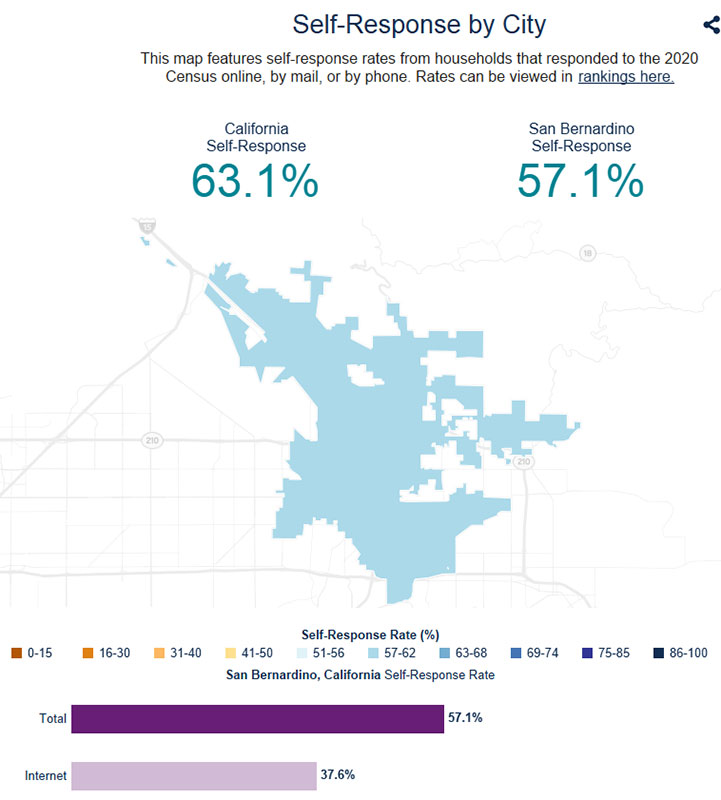 There is little doubt whatever the next ten years hold, there will be funding allocation decisions made at all levels of government; and those dollars will at least in part, be allocated based 2020 Census data.

This is where each of us has an opportunity to positively impact the future of our communities.

As residents of the City of San Bernardino look to the future, it is imperative everyone living in the city is counted in the 2020 Census.

With the city’s population now being majority minority unless everyone works to ensure a complete and accurate census count—the city will pay a price in the future regarding access to federal dollars.

Herein lies the city’s dilemma. Blacks, Latinx and other minority groups are historically undercounted in the census; and as a city, San Bernardino does not have a stellar history in relation to census response rates either.

According to the Public Policy Institute of California, 76 percent of all Californians belong to one or more groups considered hard to count. In addition to minorities, others who fall into this category include non- citizens, (who, according to the U.S. Constitution, should be counted), as well as renters, children, etc.

In anticipation of the challenges to a complete 2020 Census count in California, the state has devoted expansive resources in support of community/church leaders, various nonprofit organizations, minority owned media outlets, small businesses and others who are engaged in the complete count effort. .

June data showed the 2020 Census self-response rate in California was lower than it was ten years ago by nearly six points—62.1 percent vs 68.2 percent in 2010. Yet, though these results are disappointing, they are higher than the performance tracked for many other states.

Experts believe the disappointing response rates nationally are largely due to the impact of COVID-19, an impact that seems destined to continue playing out, at least for the foreseeable future.

Through July 7, California’s self-response rate improved to 63.1 percent with an internet response rate of 54.6 percent. Certainly, this is an improvement, but still far behind the state’s 2010 performance as noted above. The good news is, there is still time for improvement.

The 2020 Census self- response rate for the City of San Bernardino stood at a disappointing 57.1 percent as of July 7. If the city’s response rate does not improve, this could be a harbinger of ten years of federal funding that will be far below what the city should be allocated based on its actual population. As a result, all residents of San Bernardino share a mutual responsibility to insure this does not happen.

The 2020 Census takes only minutes to complete online by logging onto my2020census.gov. Your response will be safe and confidential.  Or, if you prefer, you can also respond by telephone by calling (844) 330-2020. Finally, if you received a paper questionnaire, it takes just a couple of minutes to complete and return the survey by mail.

Today, many of us feel so much of what is happening is outside our ability to control. Responding to the 2020 Census on the other hand, is one thing that rests largely in our hands. And, it that can truly help shape the future for ourselves and our community.

Be counted and encourage your neighbors, coworkers, families, and friends to do the same. Even while sheltering at home, there are opportunities to encourage those we interact with by telephone and in electronic forums, to complete their 2020 Census questionnaires. Click here to track the response rate in your community.

The price of not being counted it far too high. Each of us can help ensure our cities will have the resources it needs in the coming decade. Be counted! To track response rates in your own community vis

Stephanie E. Williams is managing editor for the IE Voice and the Black Voice News.