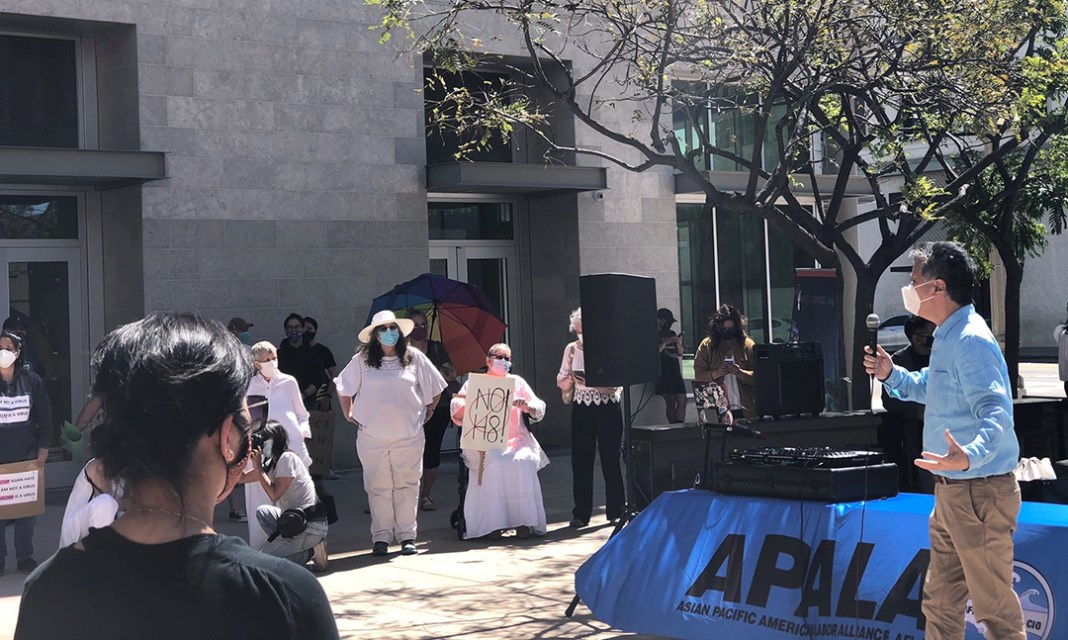 Several dozen residents gathered in solidarity in downtown Riverside to denounce xenophobia and hate against the Asian American and Pacific Islander (AAPI) communities.

The diverse crowd converged March 27 at the intersection of Main Street and University Avenue in front of a memorial for Dosan Anh Chang-Ho, a Korean independence activist.

As an Asian American congressman, Rep. Mark Takano (D-Riverside), believed it was his duty to address the recent surge in anti-AAPI hate crimes.

What Sparked the Protest?

“It’s definitely in response to (the) murders of six Asian women in Georgia,” he said about the demonstration. “That crime has awakened people everywhere.”

A 21-year-old White man killed eight people, six of whom were Asian women, in Atlanta, Georgia, during a killing spree that specifically targeted three massage parlors on March 16. The shooter insisted the attack was a result of his sex addiction. He told officers this was a result of a “really bad day.”

According to police data collected by Cal State San Bernardino’s Center for the Study of Hate and Extremism, there has been a 145% increase in hate crimes against the AAPI community in the last year. AAPI women have reported abuse and mistreatment at a higher rate.

Priya Vedula, medical school student and spokesperson for the Asian Pacific American Labor Alliance, shared some of the incidents of hate the community has suffered.

“We need to bring light to that issue, that we’ve been facing this for a long time,” Vedula said. “Discrimination is becoming more apparent now in ways that have become more violent and more hurtful, especially to our vulnerable elders and our women.”

Following the incident in Georgia, Asian-owned nail salons in Yucaipa and Riverside were harassed in a chain of hate mail that tormented them to leave the country.

The mayor of Eastvale, Jocelyn Yow, frustrated, said she felt paralyzed when watching the news. She had just held a vigil a week prior at Eastvale City Hall, but was apprehensive that rallies are not enough.

“I hope that everyone will actually take action,” she anticipated. “Do something beyond attending the rallies.”

The Importance of Ethnic Studies

“Too often, a lot of people don’t know a whole lot about Asian American history,” Yow said. “It’s not just these hate crimes. Racism has been happening in this country for decades, for centuries.”

Yow pointed to historic anti-Asian legislation enacted by the U.S. government, including the Page Act of 1875, an anti-immigration law that targeted Asian women, the Chinese Exclusion Act of 1882, the Japanese internment camps of World War II, and the murder of Chinese American Vincent Chin by two White men in 1982.

Takano attributed the rise of hate crimes in the AAPI community to the frustrations brought on by the pandemic. He said irresponsible rhetoric from former President Donald Trump stoked further resentment in an already angry minority.

“We’ve been sounding the alarm for quite some time,” Takano said. “They wanted to continue to defend President Trump’s use of those words and their contention was that this had nothing to do with that and that this president is justified.”

The congressman suggested several avenues for keeping AAPI communities safe. We need to review the extent to which we have outreach into the different AAPI areas,” Takano said. “We need to understand whether law enforcement has the capacity to be able to communicate in those languages. We need to make sure we cultivate the voices of AAPI communities on advisory boards.”

Yow said the protest gave her a “glimmer of hope.”

“It made me realize that while there’s hate, the opposite end of that is also love,” she said. “And everyone is here because they have chosen love and unity.”

Vedula said change will only come once people take accountability for their actions.  “When you see someone saying something offensive, call it out,” she said. “Courteousness in public does not absolve you from making fun of someone’s eye color or accent in the bedroom.”

Vedula, like Yow and Takano, urges change at the local level by pushing lawmakers to listen to the cries of the AAPI community.

“Change will come,” Vedula proclaimed,  “when they hear us, they listen to us, and they act on it. Stop the hate. We are not asking for anything too much.”

Cheetara Piry is a community journalist who found passion in bringing a new voice to writing with the hope of engaging communities and spotlighting local journalism as a way to enact real change.