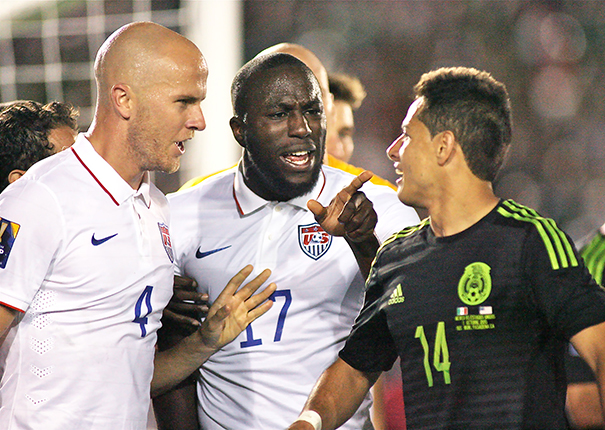 The stage was set. An iconic venue, the Rose Bowl. A capacity crowd of 95,000 plus. Two great soccer rivalries. The United States against its traditional nemesis, Mexico. Loyal fans from both nations were ready for this one before the tailgates dropped. Ultimately, Paul Aguilar’s goal in the 118th minute of extra time put Mexico ahead to stay. They earned the right to call themselves 2015 CONCACAF Cup Champions. With a 3-2 win over the Americans, Mexico now advances to the prestigious Confederations Cup, to be played in Russia in 2017.

The scoring started early in regular time with a goal from Mexico’s Javier Hernandez, better known as ‘Chicharrito’. His poetic attack put Mexico ahead in the 10th minute. This was Hernandez’s first goal against the U.S. since he has played for Mexico’s national team. The U.S. came back quickly to earn their first goal on a free kick in the 15th minute. U.S Captain Michael Bradley found the head of defender Geoff Cameron, who blasted the ball past Moises Munoz.

The crowd remained on their feet more most of this match. Reminiscent of World Cup or Olympic competitions, passion from both nations filled the venue with relentless sound. The match remained tied 1-1 in regulation. CONCACAF rules dictate two additional 15-minute periods of added time, followed by a traditional ‘shootout’ if necessary.

Mexico was the aggressive side during the initial 15-minutes of extra time, while the U.S. was a little winded and sluggish. Mexico’s quick persistence paid off in the 96th minute thanks to striker Oribe Peralta. After a long pass into the box, Mexico’s Paul Aguilar managed to clip the ball and pass through to Peralta, whose shot went right through the legs of U.S. defender Geoff Cameron.

U.S. coach Jurgen Klinsmann reacted by making some changes to bring in the speed of DeAndre Yedlin and striker Bobby Woods. With fresh legs, these two players proved to be just what Klinsmann ordered. The U.S equalizer came in the 118th minute with a nice run from Yedlin, who made a perfectly placed pass to Bobby Woods that found the back of the net. Unfortunately for the Americans, the 2-2 score would not last.

Paul Aguilar sealed the victory for Mexico with 2 minutes remaining in the second extra period. Aguilar’s decisive ‘one touch volley’ was a missile that U.S. keeper Brad Guzan could not handle. The Mexicans brought a faster pace, better touches and ultimately executed a better plan against their American opponents. For Mexico, it’s on to the Confederations Cup in Russia. For the Americans, it’s time to think it over.