Lives Transformed: Giving Back After Years of Desperation and Homelessness 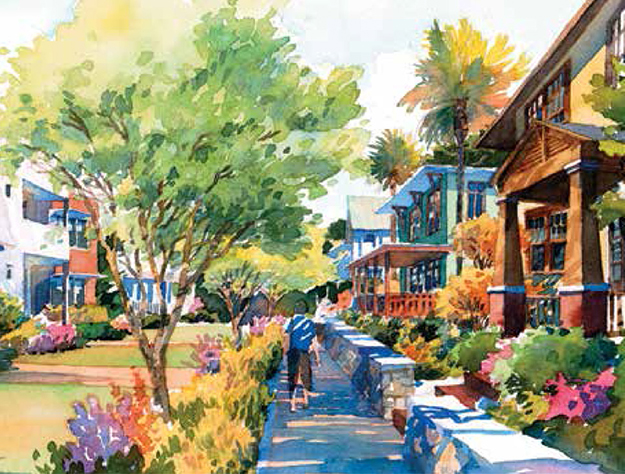 Living homeless in “the field,” raising her young daughter by whatever means she could, Lisa Ponder often wondered if she would ever again have a roof over her head. Life in a tent – surrounded by others who, like you, had lost just about everything – will do that to a person.

Abandonized. The field. Abandoes (abandoned buildings used as makeshift shelter). The language of the street never leaves you once you’ve walked in Lisa’s shoes.

She pauses, and looks tearfully at Dominique, now 8 years old.

“I don’t want us to ever stop caring.”

With the help of the San Bernardino City Unified School District, the Housing Authority of the County of San Bernardino and National Community Renaissance (National CORE), Lisa managed to escape the field – an open-air homeless encampment not far from the Waterman Gardens public housing community.

Today, she and Dominique live in Waterman Gardens, and soon will have the opportunity to live in the first off-site phase of the community’s $150 million to $200 million redevelopment. The 47-year-old says it is the first time in her entire adulthood that she has experienced hope.

“I always thought this was a place for other people, not me,” Lisa says, again shifting her focus to her daughter, a wide-eyed fourth grader with a contagious smile. “She’s a star student. After we moved in here, she was named Scientist of the Year in her class.”

Theirs is a story that reaffirms the importance of stable housing to the health and well-being of families and entire communities, says Steve PonTell, President and CEO of National CORE, one of the nation’s largest and most reputable nonprofit community builders.

“Children who have homes to go to perform better in school and have a far greater chance of breaking destructive cycles,” PonTell says. “What’s so encouraging about Lisa’s story is that it is taking place in a city that has supported the redevelopment of Waterman Gardens and understands – as others need to – that attainable housing makes for a healthier, well-balanced community.”

The Waterman Gardens plan calls for 411 new housing units, including the replacement of the 252 existing affordable units. National CORE is the master developer of the project, in partnership with the City of San Bernardino and the Housing Authority of the County of San Bernardino.

For Lisa, Waterman Gardens represents the first step toward a better life. It’s still not easy. She and Dominique live on $300 a month in subsidies. She’s trying to find a job, but a brief time in prison several years back has made that difficult. She had been in a car unknowingly with a parole violator, leading to her arrest and conviction for being an accessory.

As difficult as it is for her to make ends meet, she hasn’t forgotten those she left behind in the field. Whenever she and Dominique have a little something extra, they bring it to the homeless camp.

“The other day, I saw a 50-pound back bag of potatoes for seven bucks, so I spent the seven bucks and brought it over there,” she says. “We bring food over there whenever we can. We help whatever way we can.”

In a way, it’s a repayment of kindness she received from another formerly homeless person – her now her best friend Liz Miranda.

Nichole Callian and her children had nowhere to go after her grandfather died. Without an extended family to turn to, they lived on the streets until an opportunity opened up at Waterman Gardens.

Today, she raises her daughter and two sons – one of whom is autistic – while studying to become a certified preschool teacher. The state provides financial support for parents who serve as full-time caregivers to autistic children – something she feels “extremely grateful for.”

“If it wasn’t for that, I’d be back on the streets,” she says of a life she never wants her children to experience again. “I want them to be safe. I want them to have opportunity.”

Their Waterman Gardens home is an important part of that equation. While her family might be among the early move-ins at Valencia Vista – the project’s initial off-site phase – Nichole is happy either way.

“Honestly, I’m the type of person who is thankful for what I have,” she says. “To be able to be here and take care of my children, that’s what matters.”

So, too, does giving back to the community. Nichole coaches her sons’ Little League teams, volunteers at church and is an apprentice at the Waterman Gardens preschool.

“Helping kids is so important. Too many of them don’t have voices,” she says.