Inland Empire Ranks Among the Worst Places to Raise Children 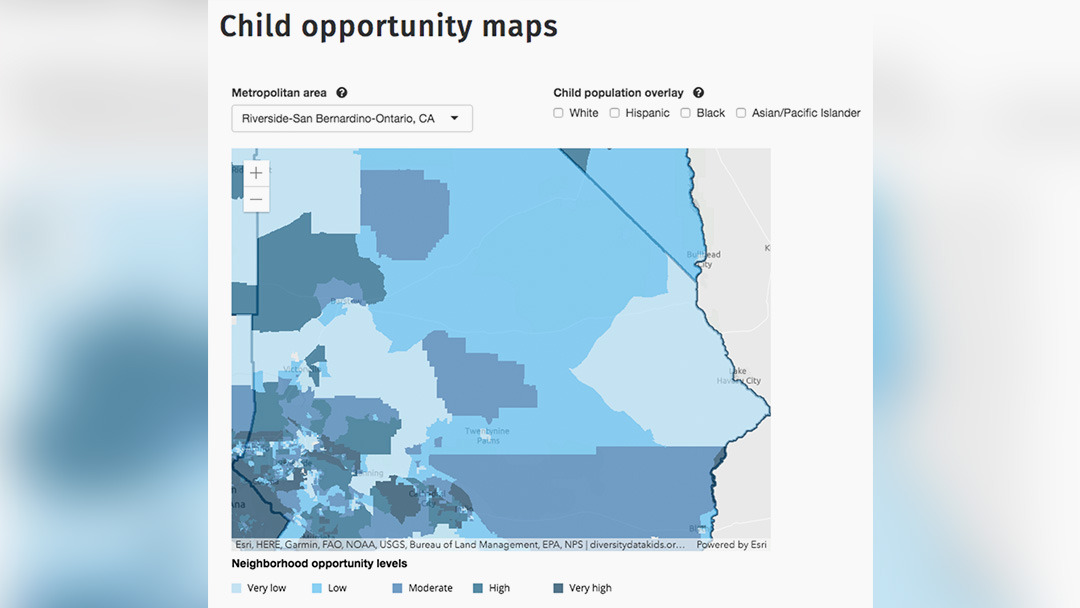 The recently released Brandeis University’s Child Opportunity Index (COI) 2.0 Revealed pervasive geographic and racial inequities for children in neighborhoods nationwide. The study assessed the odds of children achieving economic success and good health.  The Child Opportunity Index corroborated what many who work in distressed communities already know—neighborhood conditions that promote health and development varies widely for children across the country. The research also highlighted how a child’s race/ethnicity is a strong predictor of whether he or she lives in a community with access to good schools, healthy foods, parks and living-wage jobs. In the study, Brandeis considered a variety of 29 factors in determining child opportunity including such measures as neighborhood poverty, employment, housing vacancy rates, air quality, access to skilled jobs, life expectancy, etc.   Some California communities ranked among the top ten including San Jose-Sunnyvale-Santa Clara metro area in addition to San Francisco-Hayward-Oakland. On the opposite end of the spectrum Bakersfield was ranked worst in the nation for child opportunity. The Inland Empire communities of Riverside and San Bernardino did not fare much better. The region ranked as the fifth worse place to raise children among the nation’s top 100 metropolitan areas.  The study also exposed stark divisions nationally along racial lines regarding opportunities. The report showed Black children are 7.6 times more likely than White children to live in neighborhoods with significantly reduced opportunities to grow up healthy, while Hispanic children are 5.3 times more likely than White children to live in neighborhoods with lower opportunity.  By contrast, the majority of White and Asian/Pacific Islander children live in higher-opportunity neighborhoods. Lead researcher Dr. Dolores Acevedo-Garcia declared, “The COI is unique because it provides for every U.S. neighborhood, a consistent and current metric of whether children have what it takes to grow up healthy. This matters because the index gives us the ability to use contemporary data to identify child opportunity gaps and inform policy change that is needed to create more equitable neighborhood conditions so that all children can thrive.”