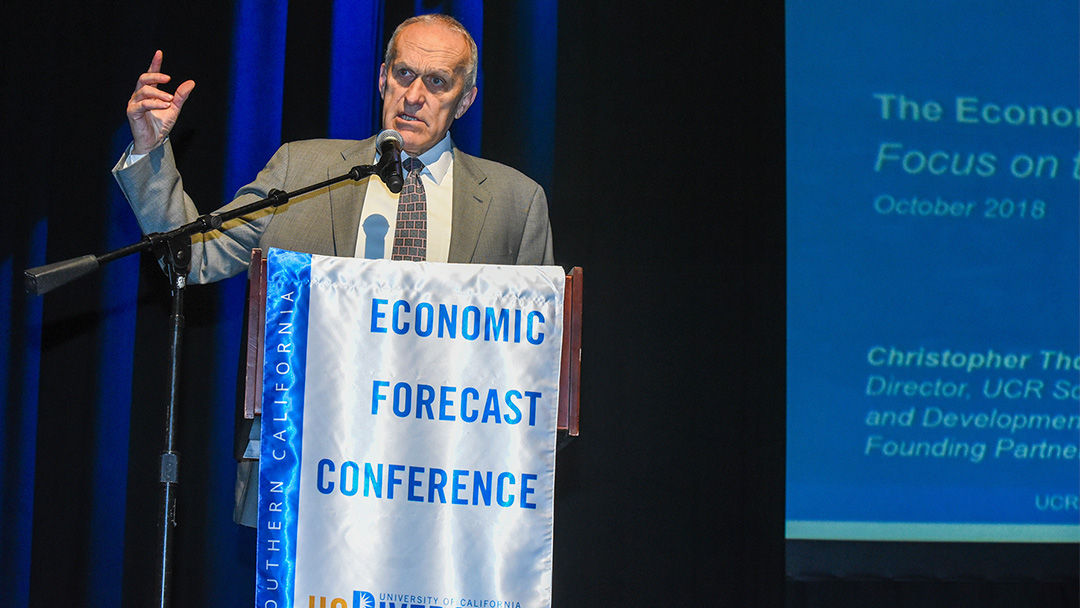 The 10th annual Inland Empire Economic Forecast Conference was held November 6th at the Riverside Convention Center in Riverside.    The conference highlighted the region currently operates at ‘full employment’ with an unemployment rate that is trending lower than its record low and further noted the area’s economy will continue to grow—although at a slower pace—through 2020.  Local health care and the logistics sectors were credited with driving much of the region’s ongoing job growth while substantial increase at the Ontario International Airport highlights the inland area’s increasingly strong economic presence among other strong economies in Southern California.  Christopher Thornberg, Director of the UC Riverside School of Business Center for Economic Forecasting and one of the forecast authors stated, “The IE economy has been gaining momentum in recent years and although there has been a slowdown, based on everything we see happening today, all the handwringing over a coming recession is just that – nothing on the foreseeable horizon would have a big enough or rapid enough impact to knock the region, or the nation, into a downturn.” Also, according to Thornberg, although there is always the potential for some unseen impact on the economy at the global or national level, the long-term threats that stem from California’s statewide housing shortage is helping to drive labor shortages. As a result, slower growth is expected to continue. Housing remains the region’s greatest immediate and longer-term dilemma. A lack of housing supply and weak rates of homebuilding, particularly within the single-family market, according to the forecast, is the most urgent challenge to economic growth in the Inland Empire. For example, although local housing stock is seriously short of demand, residential building permits in the region (both single-family and multifamily) declined by 8.2 percent in the first half of 2019 compared to the same period one year ago. This concern is not unique to the inland region. In fact, the Inland Empire has fared better than other regions in this regard. Statewide residential building permits declined an average of 17.4 percent during the same period, while Los Angeles and San Diego saw declines of 27.9 percent and 46.6 percent respectively.  The forecast also highlighted as of the second quarter of 2019, average rent in the Inland Empire reached $1,390 per month—a 3.8 percent year-over-year increase.   “The consequence of high demand and low supply is, of course, upward pressure on home prices and rental costs,” said Thornberg. “Both have increased substantially in the Inland Empire over the past year as the number of home sales has declined. This is a problem today and unless we add housing stock, is going to be even more of a problem tomorrow.” In addition to forecasts for the nation, state, and region, the event included a discussion with housing policy experts, Dr. Paavo Monkkonen and Steve PonTell, about California’s intensifying home affordability crisis and possible policy prescriptions to address the state’s lack of home building.