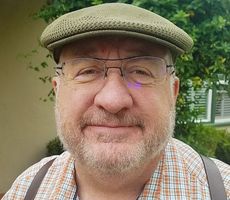 Overweight, with Type 2 diabetes, inland area resident Rick Fowler, 60, had previously undergone bariatric surgery to address his diabetes and weight. His story is not too dissimilar from that of 47-year-old elementary school teacher Abebi Bain who learned the foods she was eating aggravated her asthma and allergies.

“I had gained weight over the past few years and had developed sleep apnea and acid reflux in addition to my other issues,” Bain said. “Nothing I did seemed to help me and unfortunately, I was taking five medications a day.” After enrolling in the Wellvolution program Bain found useful health guidance through the recommended Betr Health app.

Fowler, a retired Air Force crew chief, was taking two medicines to treat his diabetes and one to address his high cholesterol before he availed himself to the dietary guidance available on the Wellvolution recommended Virta app, which restricts carbohydrates. Between mid-March and May 31, Fowler said he lost 19 pounds and his diabetes has improved.

Wellvolution is a digital and community health network which supports members’ efforts to achieve health goals. The Wellvolution platform uses an algorithm which enables it to deliver personalized support, offering nearly 60 digital apps and 30,000 brick-and-mortar community locations—considered the largest network of such providers in the nation.

Collectively, participants in the program have reported weight loss, reduced stress, and reversal in chronic conditions such as diabetes.

Diabetics like Fowler report their blood sugar levels were lowered. According to Fowler, his sugar levels have improved so much his doctor has already eliminated one of his diabetes medications and may reduce the second one, he explained.

Since the COVID-19 pandemic began, more members are tapping into Wellvolution, which launched little more than a year ago.

“Engagement has spiked as much as 10 times compared to before the public health crisis, and in March 2020 the program had the highest account creation since June 2019,” Blue Shield officials reported.

More than 23,500 members have enrolled in the redesigned Wellvolution plan in the last year including 200 in the inland region. Customized programs and digital coaches are available to most Blue Shield members with their benefit plan at no additional cost.

Describing how Wellvolution provided relief and solutions to her weight gain, sleep apnea and acid reflux Bain explained, “[O]nce I started using the Betr Health app, I discovered how to eat the right foods for my body and avoid ‘triggers’ that caused problems.”

As further evidence of the program’s benefits Bain added, “I lost 23 pounds in my first month, my sleep apnea disappeared, and my asthma, allergies and acid reflux were under control. I haven’t taken any of my medications in over seven months, and my stress levels are way down.”

Bain’s weight loss reflects the experiences of other participants in the Wellvolution program. Members said their top reason to join Wellvolution was to lose weight, with about 13,000 participants reporting they lost a total of more than 83,000 pounds in the first six months of starting the program. Other top reasons for joining Wellvolution were to move more, reduce stress and eat more healthily.

The average age of participants was 49 with the largest age group between 50 and 59 years old. Women outnumbered men (72 percent vs. 28 percent) in the program’s first year.

“We know that people want options in improving their health, depending on their personal preferences,” said Bryce Williams, vice president of Mind Body Medicine at Blue Shield of California. “Wellvolution puts members at the center of its program and lets them choose the direction they want to take.”

Since the COVID-19 pandemic, more members are tapping into Wellvolution. Engagement has spiked as much as 10 times compared to pre-pandemic levels according to Williams, and there has been a significant increase in communication between members and their digital coaches online.

“Our providers quickly pivoted when the pandemic began and have adapted their strategies and approaches to address the reality of being indoors for hours each day and with potentially limited access to fresh foods and outdoor exercise,” Williams said.

During the age of COVID-19 residents everywhere are looking for ways to improve their health. In response, Blue Shield of California is inviting their clients to join the Wellvolution free of charge.