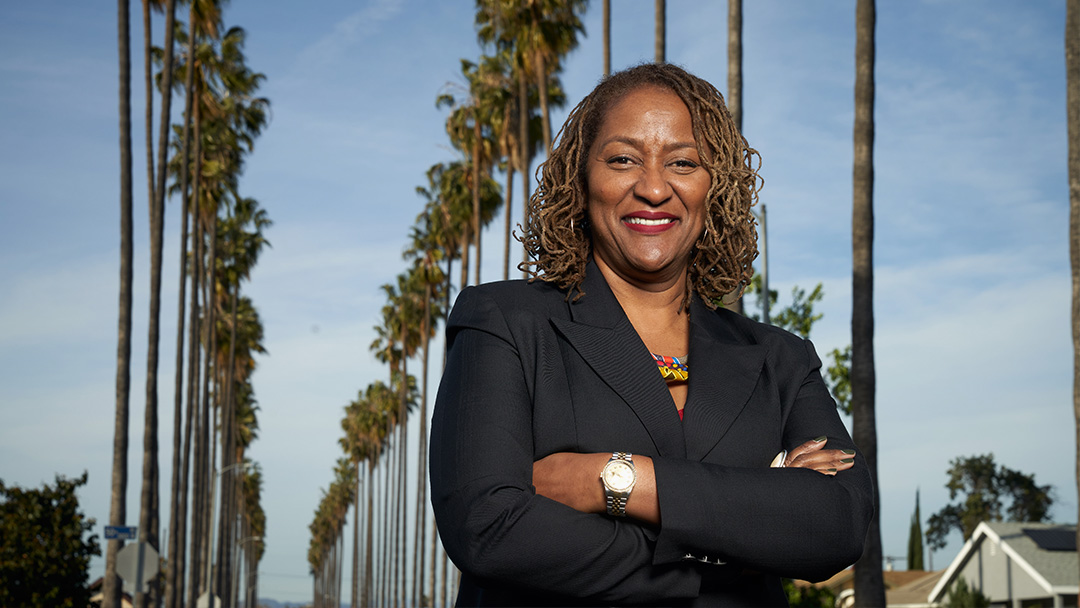 For the first time in history, the five-member leadership team that Mitchell is joining, which represents nine cities in California’s most populous county, is composed of all women. Mitchell will serve as chair pro tem of the current board, which Los Angeles County political insiders have now dubbed the “fab five.”

“I have to think that somewhere on high, Justice Ruth Bader Ginsburg is smiling,” said Jenkins in his remarks, acknowledging the installation of the all-women county board. “When she was asked by a reporter how many women it would take for her to feel that there was enough diversity on the Supreme Court, she said ‘all nine, all of them” Jenkins said, quoting Ginsburg. “And in the fab five, you all have accomplished just that.”

Before administering the oath, on a more personal note, Jenkins praised Mitchell, who he says he says he has known for over 25 years, for her accomplishments and leadership ability.

“Holly is a deeply committed public servant,” Jenkins continued.  “She’s the best kind of public servant. She’s smart, a true visionary, pragmatic in her judgments, humble and forceful at the same time. And last, she is a leader – a charismatic leader.”

Mitchell, who represented the state’s 30th Senate District and was the only African American woman serving in the California State Senate from 2013 to 2020, succeeds Mark Ridley-Thomas, who is also Black. In her new role she represents the Second District of Los Angeles County. The district covers an area that includes parts of Los Angeles, Carson, Compton, Inglewood, Mar Vista, Ladera Heights, Crenshaw, Lynwood, and other cities. It is located in the region of the state that has the highest number of African Americans.

“Equity will be at the center of all of our work,” Mitchell promised in her remarks. “As we fight to bring more housing to those in need, more mental health services, more job opportunities and real second chances for re-entry, they will be accomplished through that lens. And I look forward to collaborating with the newly-formed anti-racism initiative established by the supervisors.”

Mitchell joins the board when Los Angeles County faces the worst occurrence of the COVID-19 pandemic in the state. The county also faces a homelessness crisis that is the worst in the country, heightened racial tensions, a strained relationship between law enforcement and minority residents of the county, among other problems.

The other women on the board are: Hilda L. Solis (First District), who served as United States Secretary of Labor during the Obama administration; Sheila Kuehl (Third District); Janice Hahn (Fourth District); and Kathryn Barger (Fifth District).

During the virtual swearing-in ceremony, soul singer and Oakland native Goapele sang “Lift Ev’ry Voice and Sing,” and religious leaders representing Christianity, Judaism and Islam offered prayers. The event’s Master of Ceremony Manuel Pastor, a professor at the University of Southern California, also paid tribute to Native American ancestors he called the “caretakers of the land.”

Assemblymember Sydney Kamlager (D-Los Angeles), who says she looks up to Mitchell and considers her a “big sister,” has announced that she is throwing her hat in the race for Mitchell’s Senate seat.

In another virtual ceremony last Friday, Gov. Newsom swore in Jenkins to the California Supreme Court.

“The residents of the Second District are fortunate to have you represent them,” said Ridley-Thomas to Mitchell. Ridley-Thomas served on the board for 12 years.

“I’ve worked with Holly for many years through state and county partnerships, tackling some of the most daunting social issues of our time — homelessness, child maltreatment, human trafficking, poverty, criminal justice reform and structural racism,” Ridley-Thomas said. “She is a trailblazer, a leader, a fighter on the frontlines pushing for equity and justice for those who have no one else to stand up for them.”