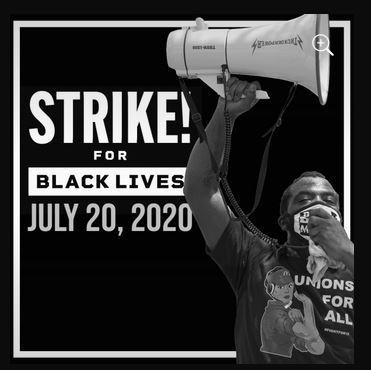 Frontline workers and others in more than 200 American cities and twelve dozen countries have pledged to walkout on Monday July 20, 2020 in memory of African American George Floyd killed by police in Minnesota in May and in support of Black lives.

The nationwide general strike was called by a coalition of labor unions and racial and social justice groups in support of Black Lives Matter. Identified as a “Strike for Black Lives,” tens of thousands of working people are expected to  walk off their jobs to confront systemic racism in America.

Included among those participating, are fast-food, nursing home, rideshare and other workers. They will walk off their jobs for eight minutes, 46 seconds at noon on Monday to remember Floyd, Breonna Taylor, Elijah McClain and other Black people killed by police.

They  are demanding corporations and governments do something to challenge the “triple threat of white supremacy, the nation’s public health emergency, and its broken economy.”

When the event was announced, strike organizers quoted McDonald’s employee Angely Rodriguez Lambert, an Oakland McDonald’s worker who declared, “Companies like McDonald’s cannot on the one hand tweet that ‘Black Lives Matter’ and on the other pay us poverty wages and fail to provide sick days and adequate PPE.  We’re going on strike because McDonald’s and other fast-food companies have failed to protect us in a pandemic that has ravaged Black and Brown communities across the country.”

She affirmed, “We’re going to keep joining together and speaking out until McDonald’s and other companies respond with actions that show they really value our lives.”

S. E. Williams is the Executive Editor for the IE Voice and Black Voice News.