From Crisis to Crisis— When the Eviction Moratorium ends in September, how many Californians will be at risk of eviction? 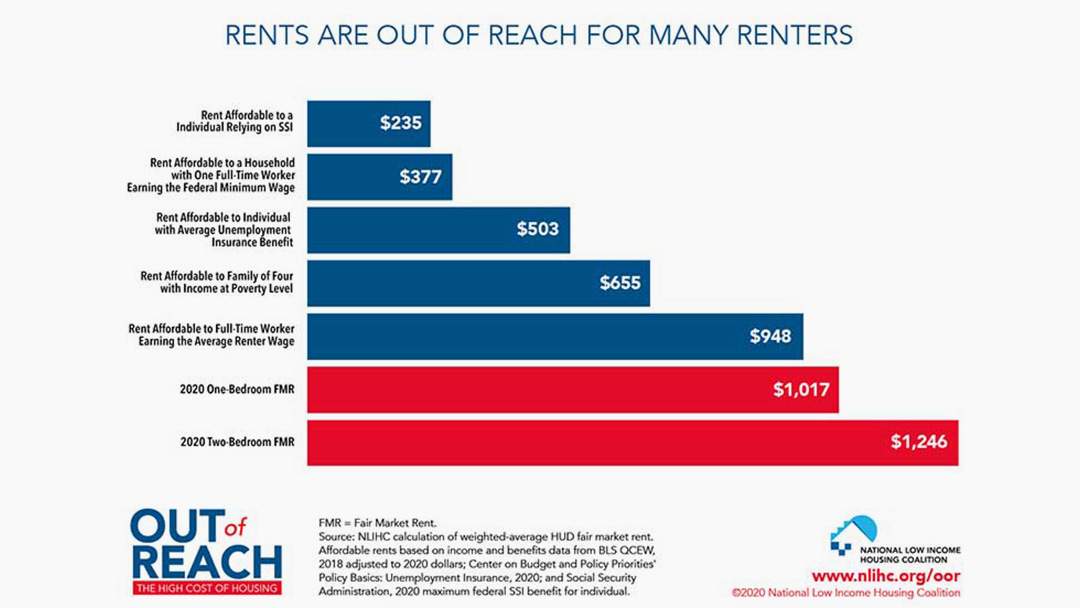 The largest single expenditure for most families is the cost of housing and for many, it is the most significant driver of their economic security.

Yet, there is not a single city, county or state in this nation where a minimum wage worker can afford to rent a two-bedroom apartment without it consuming more than 30 percent of their income (the accepted standard of affordability) according to a new report by the National Low-Income Housing Coalition (NLIHC). A map showing the number of hours someone earning the minimum wage needs to work to afford a one-bedroom apartment at fair market rent.

Someone who earns a minimum wage—even working full time—does not earn enough money to pay the rental cost of a modest one-bedroom apartment in nearly 95 percent of cities across the country.

This issue will soon be further complicated with the threat of mass evictions looming on the horizon for nearly 20 million American renters as moratoriums on evictions begin to expire across the country even as the pandemic is raging.

By the end of the 3rd quarter, people at risk of eviction in California is projected to be as high as 3.9 million according to the Aspen Institute—a startling number by any measure. A map that represents the hourly wage that a household must earn (working 40 hours a week, 52 weeks a year) in order to afford the Fair Market Rent for a two-bedroom rental unit, without paying more than 30% of their income.

The significant gap between renters’ wages and the cost of rental housing across the country has only widened due to the pandemic.

NLIHC’s report centers on what is defined as a Housing Wage—an estimate of the hourly wage a full-time worker must earn to afford a modest rental home based on the Department of Housing and Urban Development’s (HUD) fair market rent, without spending more than 30 percent of their income on housing. This is considered the accepted standard of affordability.

California has the second highest housing wage in the country.

Based on the state’s current minimum wage an individual needs to work 114 hours per week to afford rent for a two-bedroom house/apartment. Between 19 million and 23 million Americans are at risk of eviction by the end of the 3rd quarter including people of color, low income renters and the undocumented. (Courtesy of the Aspen Institute)

There are approximately 5.88 million renters in the state of California and while the minimum wage is currently $13 per hour—the average renter wage is $23.96 per hour. However, in California the current two-bedroom housing wage sits at $36.96 per hour.

As the ability to pay rent continues to diminish, the virus once again shuts down businesses, and every week more people join the ranks of the unemployed, the report’s authors noted, “Few events in history highlight as clearly as the COVID-19 public health crisis that ‘housing is healthcare.’

“More than half of all low-income households experienced job or income loss because of the pandemic,” they noted.

Many low-income workers, however, were already struggling to pay their high rents in California even before the onset of the pandemic. Now, their needs have grown and nowhere is this more an issue than in the state’s Black communities.

The unemployment rate among Black workers at the end of June reached 16.8 percent and with the reclosing of large segments of the state’s economy this week, that number is certain to grow and seems destined to surpass the peak of Black unemployment during the Great Recession. During this same period, the unemployment rate for Black women, who head most Black households, ended June at 18.8 percent.

As Covid-19 continues to rage in California and around the nation and far too many low income/low wage workers teeter on the edge of homelessness, the report’s authors reminded the nation, “Millions of renters with extremely low incomes, including low wage workers cannot afford their housing. Yet, only one in four households who qualify for housing assistance receives it.”

In mid May Senator Sherrod Brown (D-OH) introduced legislation which passed the U.S. House of Representatives. It would authorize $100 billion for an Emergency Rental Assistance Program, however there is little hope it will even be considered in the Republican led Senate. Another confirmation of how elections have consequences.

On July 1, California Governor Gavin Newsom extended an authorization which allows local governments to delay evictions through the end of September for all renters impacted by the pandemic.

September 30, however, is not that far away.

Low income workers and their advocates are looking to legislators and local leaders to structure a way forward after September 30.

Header Photo: The rental cost that various households can afford compared to the fair market rent of a modest one-bedroom or two-bedroom apartment.