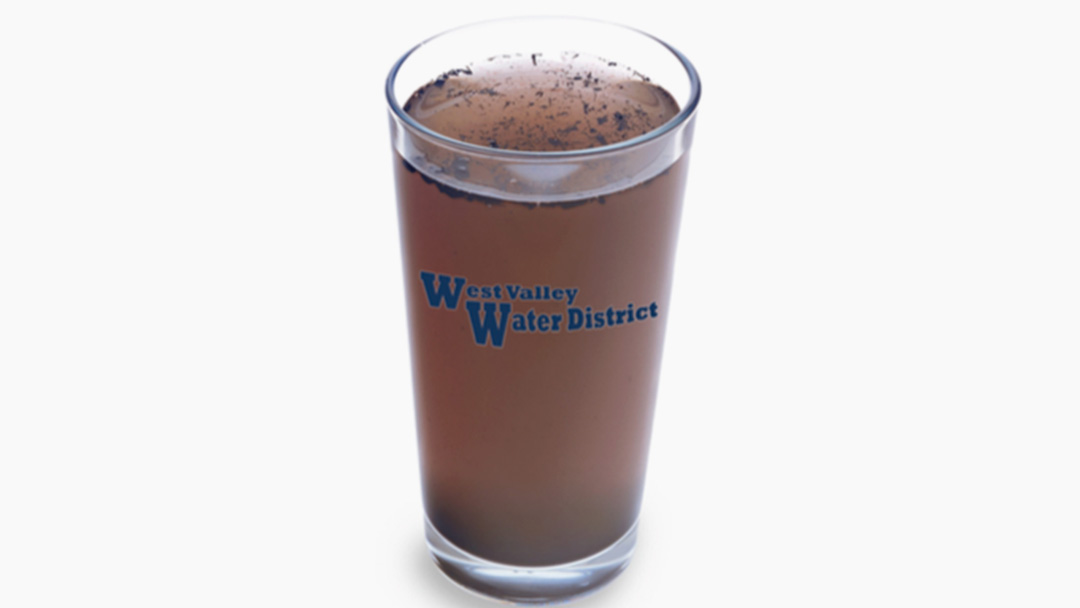 It was the kind of celebration many of West Valley Water District’s working-class customers might enjoy, especially since they purportedly paid for it; but the event was hosted for a select few and the public was not invited.

On Thursday, December 7, 2017, members of the West Valley Water District’s (WVWD) Board of Directors (BOD) gathered at the Sierra Lakes Golf Club in Fontana following a shortened board meeting to celebrate. There is a lingering question regarding exactly what were they celebrating?

Was it a Christmas celebration as the document submitted by Board President Dr. Clifford Young for reimbursement of the cost of the affair indicated, or was it a campaign celebration as alleged by the West Valley Water District Ratepayers Association. In either case, it left rate payers questioning whether it was an appropriate use of ratepayers’ funds?

During the celebration those in attendance first teased their palates with delicious hors d’oeuvres before dining on prime rib, pasta primavera, rosemary potatoes, veggies, garden salad and rolls. They then topped off their meals with tuxedo cake, such an appropriate dessert for the holiday season. The cost of the event, including the allowable 15 percent tip, totaled $1897.43.

California law contains certain requirements and restrictions on local agency practices detailing what is reimbursable. California’s Institute for Local Government (ILG) whose goal is to assist local leaders to govern openly, effectively and ethically, noted that the starting point for analysis of what is appropriate is rooted in the reality that public resources are just that—the public’s resources.

“The power to spend these resources is a sacred trust,” ILG doctrine asserted further noting that as a result, public officials have an ongoing responsibility to consider the highest and best use of those resources. The key question for decision-makers to always ask themselves when making spending decisions is—What is the public’s interest? What kinds of expenditures best serve the interest of the public?

“Water districts often operate out of the limelight, and we know democracy dies in darkness.”
Kathryn Phillips, Common Cause

The West Valley Water District Rate Payers Association under the leadership of its president Don Griggs, has alleged the WVWD Board of Directors failed to test against these questions when they held the December 7 celebration, misrepresented it as a Christmas celebration, and allegedly paid for it with rate payer resources.

Earlier this month, the WVWD Rate Payers Association (Association) sent a formal complaint to the Fair Political Practices Commission (FPPC) making their case that WVWD Board of Directors and its President Clifford Young used ratepayers’ money for personal political purposes in relation to the December 7 event. 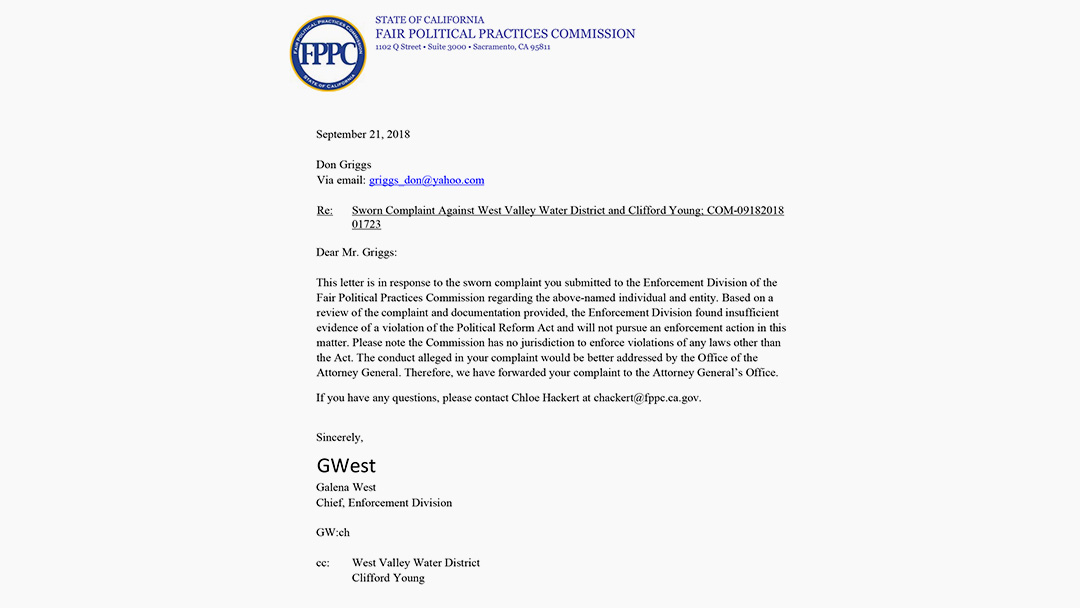 In a sworn statement, Griggs on behalf of the Association, presented the (FPPC) with a very detailed report which laid out a compelling case in support of their claim and included copies of key WVWD documents to support their allegations.

However, it is what she said next that lends credence to the Association’s concerns. West continued, “Please note the Commission has no jurisdiction to enforce violations of any laws other than the Act. The conduct alleged in your complaint would be better addressed by the Office of the Attorney General. Therefore, we have forwarded your complaint to the Attorney General’s Office.”

Sociologist and author, DaShanne Stokes, once proclaimed, “Leadership by deception isn’t leadership. It’s fraud.” Here is an overview of what the Association has alleged.

On December 8, 2017, the day after the celebration, Sierra Lakes Golf Course Event Coordinator emailed President Young, host and contact person for the event, a copy of an invoice for the event that reflected a balance due of $0.00.

Subsequently, on December 27, two requests were made on WVWD Disbursement Vouchers payable to President Young. One voucher in the amount of $527.91 was for reimbursement of his Long-Term Care Medicare. Documents showed the reimbursement for this voucher was paid on December 29, 2017. The second voucher, also payable to President Young, this one in the amount of $1897.43 was for the “12/7/2017 Event Dinner for West Valley Water District CY 120717 at Sierra Lakes Golf Club.” Supporting documentation showed an employee in WVWD’s Accounting Department processed both requests for Disbursement Vouchers.

The Association presented a copy of a WVWD internal Vendor Number for the two Disbursement Vouchers that reflected the same payment date of January 4, 2018, same payment number, and a total payment amount of $2,425.34 (the total of the two Disbursement Vouchers) to President Young. There were two invoice numbers on this document one for $1,897.43 (the December 7 event) and the other for $527.91 (Young’s Long-Term Care premium). Supporting documents show a WVWD employee in the accounting department as the contact person.

Although both disbursement vouchers reflected the same payment date, the WVWD December 2017 Cash Disbursement Report only reflected the $527.99 reimbursement. The Association also provided a copy of this document in support of this point.

Mysteriously, the Cash Disbursement Report for January 2018, was never been presented to the public. It would/should have reflected the reimbursement for the Christmas Event in the amount of $1,897.43 payable to President Young. The monthly publication of the WVWD Cash Disbursement Reports began again with the February 2018 report period.

The Association purported President Young and the BOD, “. . . deceived and abused their positions and knowingly submitted false/misleading financial information to all participants under the language of a Christmas Event for WVWD.” The Association further alleged the event was in reality, “a victory celebration for campaign workers and political consultants who helped in their [BOD members] elections.” 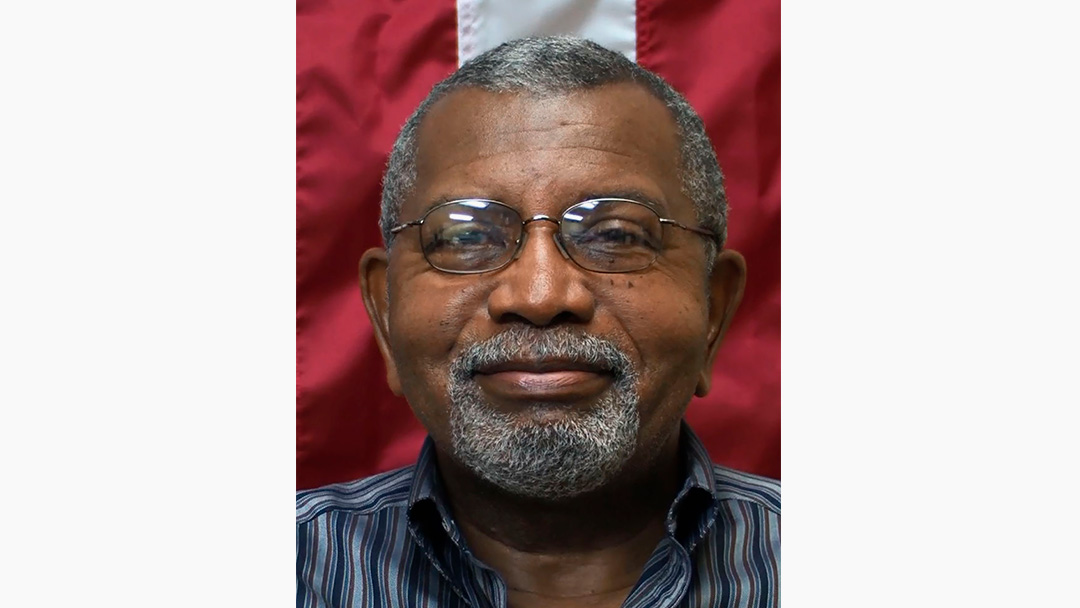 To bolster their claim this was a political event, the Association provided further details that included how President Young’s campaign manager David Morgan, coordinated and announced the event in public during the December 7, 2017 WVWD Board meeting (though the public was not invited).

The Association has also assembled a partial list of the 30 or so guests in attendance. In addition to members of the BOD, it includes their spouses, campaign contributors, campaign workers, local elected officials and a slate of personal friends—further supporting their allegations that this was a political event.

This reporter left several messages for WVWD administrators to provide an opportunity for them to clarify and/or provide a copy of the January Cash Disbursement Report and/or to respond to these allegations—They never responded to these requests.

In an exclusive interview with The Voice/Black Voice News, Kathryn Phillips, Western Region Communications Specialist with the nonprofit organization Common Cause stated, “Local governments are prohibited from making “gifts” of public funds. Whether a Christmas Party qualifies as a gift is probably a case-specific question. For example, an office Christmas party to boost staff morale or a public Christmas party to get the community to learn about the District might be okay” Those were not the circumstance in this case.

Sam Martinez, Executive Officer with the Local Agency Formation Commission (LAFCO) was asked whether his organization had oversight responsibility for the WVWD. He explained although LAFCO’s primary role is to regulate boundaries for cities, etc., they do look at the agency’s ability to serve within the water agency’s boundaries. “We look at audits,” he explained, “not budgets. We base our review on audits of [the] district.” According to Martinez, the WVWD should follow their policies relative to reimbursement. 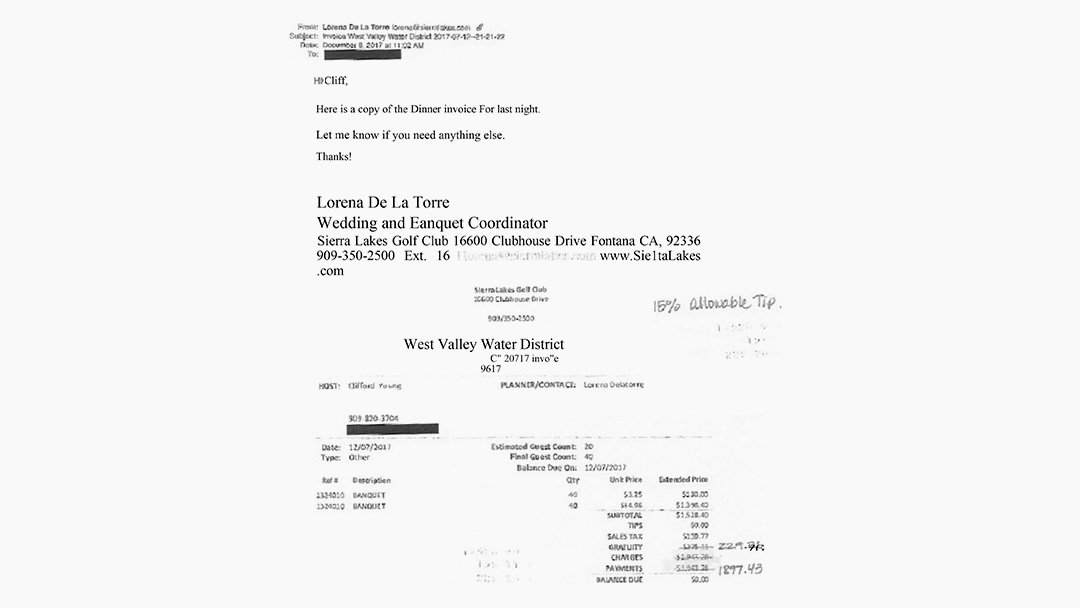 On September 1, 2016 the WVWD BOD adopted its “Compensation and Policies Related to Board Activities, Ordinance No. 84.”

Ordinance 84 rescinded all previous orders and resolutions related to this issue and updated policies for compensation of directors. Section 304 of the Ordinance states, “Adequate documentation of actual costs shall include an identification of the official duty… and proof the expense was paid by the director such as the credit care receipt or cancelled check.” Item’s in this section note that, “Board members will be reimbursed for any expenses incurred during the course of conducting district business with other elected officials, district employees and consultants.

The subsequent item in this section states, “the following are not reimbursable expenses: political contributions, alcoholic beverages, tips greater than fifteen percent…etc.”

The inappropriateness of political contributions was affirmed by Phillips of Common Core, “The government body should not reimburse for a campaign/political event. However, if it did, that payment should be reported as income on his [President Young’s] campaign filing.”

In its publication, Every Day Ethics for Local Officials, the ILG addressed the issue of what it defined as “Buying Meals for Others on the Public’s Dime.”  It noted there are times when paying for a companion’s meal can be in the “bona fide” interests of the official’s community and gave examples including meeting with legislators when one is discussing legislation of interest to the official’s constituency.

“By definition,” the ILG continued, “if one is looking at a meal expense as a perk, the meal is not benefiting the community as a whole and is not an appropriate use of public resources. Such a mindset is also inconsistent with the laws that limit compensation for elected officials.”

According to Griggs, the Association is confident in the allegations they have levied against President Young and the WVWD BOD. When asked for his response to the FPPC’s referral of their sworn complaint to the California Attorney General’s Office. He replied, “Perhaps the Attorney General will take a closer look. We have laid out our case and we will continue to pursue this issue.”

The Voice/Black Voice News will continue to follow this story.