Festival of Lights Returns this Month 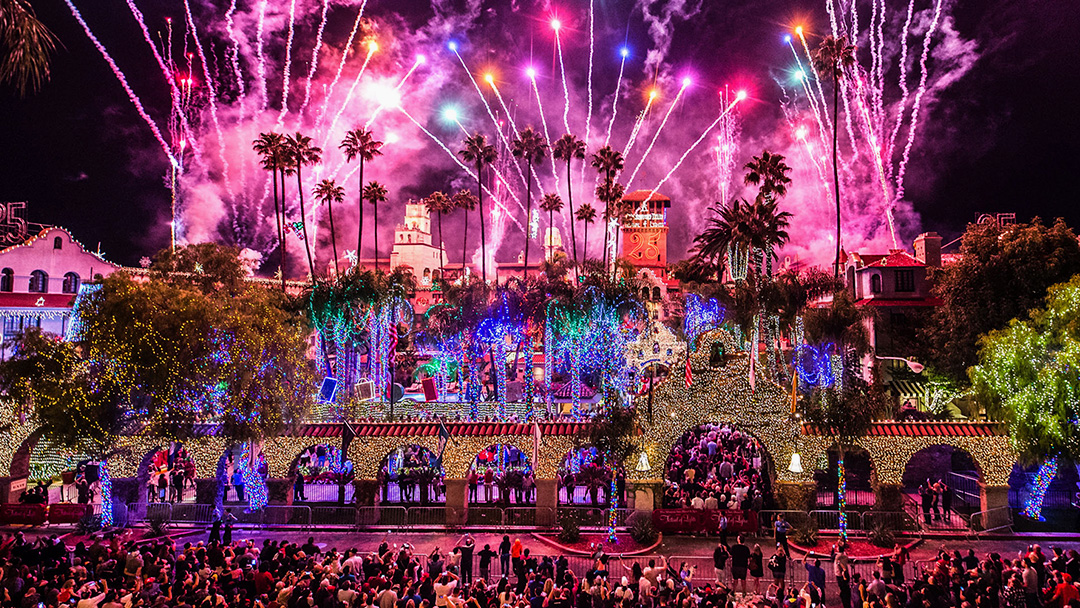 On Friday, November 29, 2019 the Mission Inn Hotel & Spa will kick off its 27th annual Festival of Lights.  The annual event traditionally held at dusk the Friday after Thanksgiving begins with opening remarks by dignitaries before more than five million holiday lights, decorated with 400 animatronic figures and filled with holiday music are switched on in front of the historic landmark hotel. The event is traditionally accompanied by a huge fireworks’ display.   Beyond the lights, this year’s display will include a large snow globe on Main Street between University and Mission Inn Avenues. The globe highlights the progress and accomplishments of UC Riverside. Visitors will be able to step inside to snap selfies with an image of the university’s bell tower.  There will also be live music daily at an Entertainment Stage located in city hall’s breezeway on Main Street between 9th and 10th Streets. Beginning Saturday, November 30th and continuing through Sunday, December 29th, the Artisan’s Collective will highlight artists and craft makers. The collective will be located on Main Street between University Avenue and 9th Street from 5 p.m. to 10 p.m. every Thursday and Sunday. This year the century wheel and the carousel will be in the parking lot adjacent to City Hall at 10th and Main streets. Horse drawn carriages and lots of vendors selling holiday sweets and treats will also be available.   In 2014 the Festival of Lights was named America’s Best Public Lights Display by USA TODAY readers and in 2015 it was honored as America’s Best Holiday Festival.  This year more than 75,000 people are expected to attend the annual switch-on ceremony. Since garnering national attention, the Mission Inn & Spa Festival of Lights now attracts people of all ages from across the country.