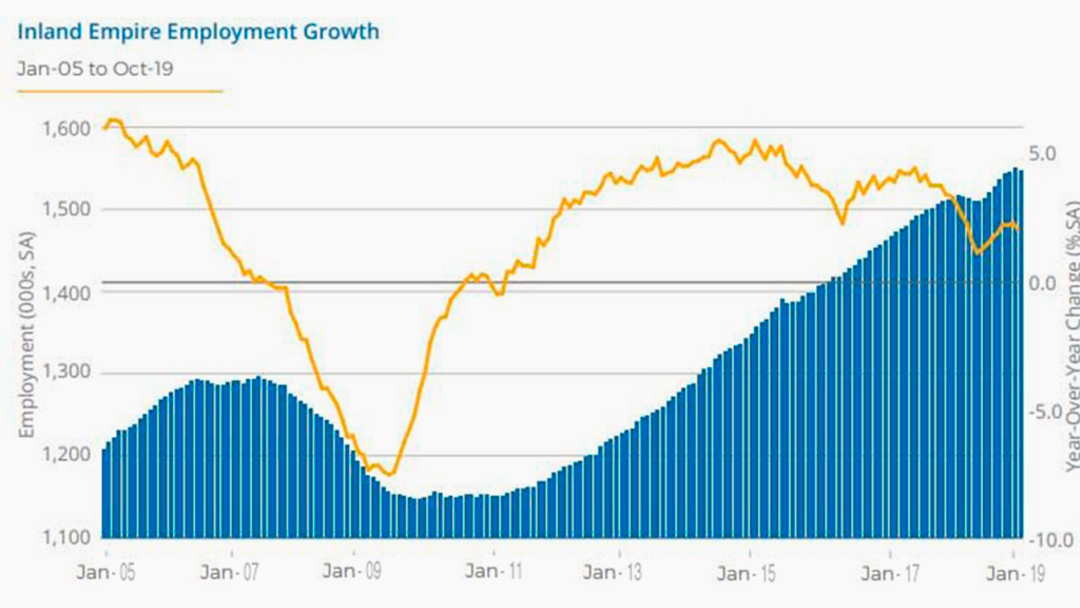 The inland region experienced a higher share of job growth than neighboring Southern California metro communities; California as a whole; and the nation overall during the past year according to analysis released December 20, 2019 by the UC Riverside School of Business Center for Economic Forecasting and Development. The assessment is based on the recently released Inland Empire Business Activity Index (Index). The Index which is produced entirely by the UC Riverside School of Business Center for Economic Forecasting and Development, tracks performance of the Inland Empire regional economy on a quarterly basis and is adjusted for seasonal variations.  The forecast is estimated using a wide range of economic data including employment, economic output, income, real estate, and other indicators at the national, state, and metropolitan level. Commenting on the recent Index report Adam Fowler, UCR’s Director of Research at the Center for Economic Forecasting stated, “For the Inland Empire, the key takeaways in these numbers are the region’s overall competitiveness with other urban metros amidst a tight labor market, and that job growth is coming from a wide, healthy range of industries.” He continued, “While employment growth in the Inland Empire, and across other geographies, has indeed slowed from previous years, it has not stopped or reversed and shouldn’t be interpreted as a sign of a downturn.” The Inland Empire’s annual job growth stood at two percent matched San Diego’s two percent growth as of October 2019. Both areas out-performed growth in the United States (1.4 percent), California (1.8 percent), the Los Angeles metro area (1.3 percent) and Orange County (1.2 percent).  Noted among the report’s key findings were issues related to wage pressure which noted that although nominal wages continue to increase in the Inland Empire, they are not increasing on par with the state overall. The region reflected a 3.8 percent wage growth vs the state’s overall wage growth rate of 4.2 percent from the first half of 2018 to the first half of 2019.  On the other hand, both consumer and business spending increased. Taxable sales in the region jumped 4.1 percent on an annual basis compared to 3.7 percent in the state overall; while business and industry receipts, which represent business-to-business spending experienced 4.2 percent growth.