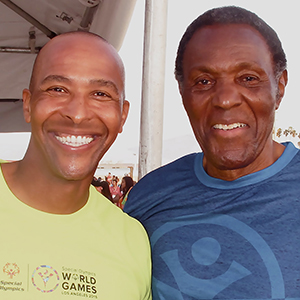 Dain Blanton initially established himself on the basketball court but became the first and only African American to win a gold medal in Beach Volleyball.

Dain earned CIF All-State honors at Laguna Beach High School in Orange County. Blanton, at 6’3” and a gifted athlete, chose the road less traveled and attended the University of Pepperdine on a volleyball scholarship. Dain played collegiate indoor Men’s Volleyball at the highest level, leading the Pepperdine Waves in capturing an NCAA National Championship in 1992.

Blanton graduated in 1994 and joined the (AVP) Association of Volleyball Professionals Tour for the novice ‘Beach Volleyball’. Less than six years later, he and his partner, Erik Fanoimoana not only made the U.S. Olympic team but surprised all the experts by winning the Beach Volleyball Gold Medal on the sands of iconic Bondi Beach in Sydney, Australia 2000.

With model good looks and a knack for communicating with an audience, Blanton can be seen these days in front of the NBC cameras, doing what comes naturally, color commentating Professional Beach Volleyball. Although he looks like he can still play at the highest level, Blanton is quite comfortable at his new profession.

Earlier this month, he joined fellow Olympic Gold Medalists to serve at the Special Olympics World Games on the sands at Long Beach.

The professional players were then joined by iconic Olympic Decathlete Rafer Johnson to present the Special Olympic Beach Volleyball medals earned in all divisions. Maria Kennedy Shriver said, “My mother felt that if athletes with intellectual disabilities could compete against you on the athletic field, you would have to adjust what you thought people of intellectual disabilities were capable of”. Her son Tim added “My mother trusted sports to be a revolutionary tool”.

The Unified Sports Experience was an overwhelming success, thanks to the sincere generosity of Dain Blanton and his fellow professional athletes. Catch Dain during the AVP competition and NBC weekend coverage from Huntington Beach, September 11-13.