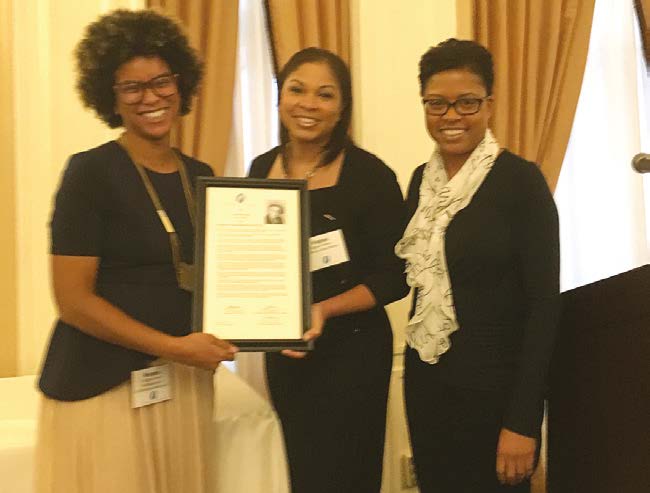 Two of California’s pioneering Black women newspaper publishers were honored earlier this month at the 140th annual meeting of the California Press Foundation in San Francisco.

I was pleased to join my sister Regina Brown-Wilson in inducting Charlotta Bass (1874-1969) into the California Newspaper Hall of Fame and present the award to Morgan Fykes, Bass’ great-grand niece.

Bass was managing editor and publisher of the California Eagle from 1912 to 1951. The Eagle, founded in 1879, was one of the longest-running African-American newspapers in the West.

As a crusading journalist and political activist, Bass was at the forefront of the civil rights struggles of her time, especially in Los Angeles, but also in California and the nation.

Bass was also a political candidate at the local, state and national level, including running for vice president of the United States on the Progressive Party ticket in 1952. She used the newspaper, along with direct-action campaigns and the political process, to challenge inequality for Blacks, workers, women and other minorities in Los Angeles.

Bass fought important battles against job and housing discrimination, police brutality and media stereotyping, and for immigrant and women’s rights and civil liberties.

She paid a price for her outspokenness. Her life was threatened on numerous occasions. The FBI placed her under surveillance on the charge that her newspaper was seditious and continued to monitor her until her death.

Craig Harrington, publisher of The Intermountain News in Burney, and a Cal Press director, presented the Philip N. McCombs Achievement Award to my mother Cheryl Brown, former co-publisher of the Black Voice News. This award honors newspaper executives who are no longer fully active in the industry but who have served their communities well for an extended period and have made lasting contributions to the industry.

She co-founded Brown Publishing Company in 1980 to produce the weekly Black Voice News.

Prior to being elected to the Assembly, she served as the president of the San Bernardino NAACP. She also spearheaded local events including Take a Cop to Lunch, Bill Pickett Rodeo and the Footsteps to Freedom Underground Railroad Field Study Program, which has grown into three tours a year and boasts over 1,500 alumni.

Brown has been recognized by countless local, state and national organizations for her work on behalf of the community in various capacities as an elected official and community volunteer. She continues on that path as the California State Commissioner on Aging.