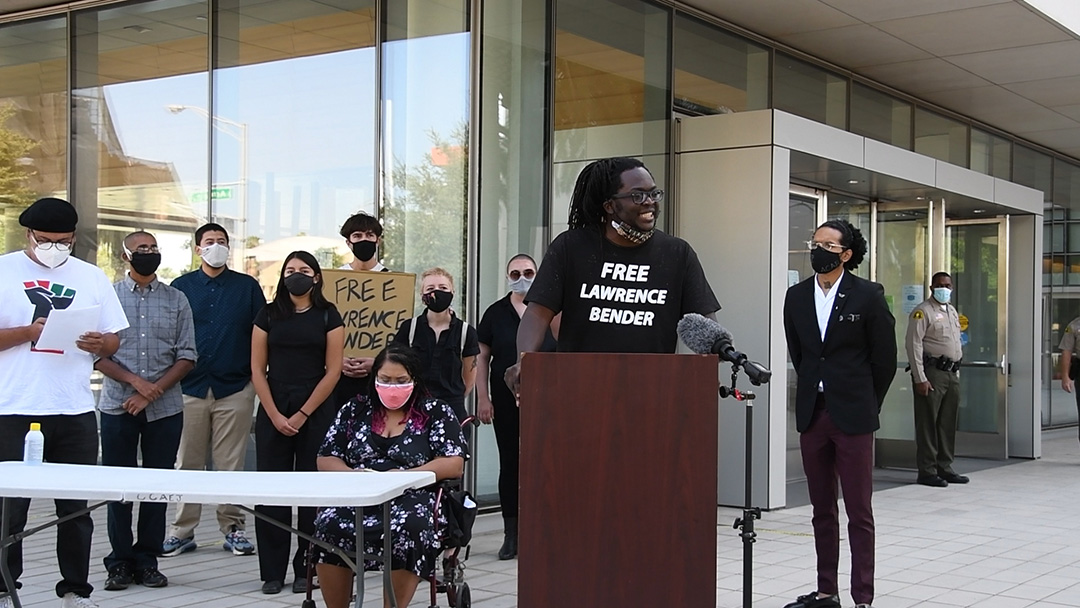 The Black Lives Matter Inland Empire chapter held a press conference in front of the San Bernardino Justice Center on Friday, August 7 where several members were arrested a week prior.

On Friday, July 31, four BLM members and seven fellow protesters were arrested for demonstrating their support for Lawrence Bender on his court date.

The eleven protesters who were arrested, now called the IE Eleven, were released 12 hours later that same evening.

The inland chapter was not met with the same amount of sheriff employees and resources outside the Justice Center just seven days before. On August 7, only a fraction of the sheriff employees could be seen surrounding the building compared to the last time protesters gathered in support of Lawrence Bender on his court date of July 31.

Darrin Johnson, a member of Black Lives Matter IE, began the press conference with several of the IE Eleven standing behind him at the podium, stating BLM IE represents the poor and underserved people in the inland area. He stated that Bender was one of the voices of the underrepresented that they serve and support, claiming that Bender was unlawfully detained after he was shot in June 2019 by Michael Babineaux, a Rialto police officer.

Johnson described how when he and many other protesters showed up on Bender’s court date to spread awareness, they arrived, they were tackled, they were hit, they had phones smacked out of their hands “and eleven of us were unlawfully detained.”

Multiple protesters recorded the confrontation and most of the arrests with their phones on July 31.

“If you have the oppressor putting their boot on your neck, do you expect us to react with calm?” Johnson asked the crowd present, regarding the outraged voices directed at the sheriff employees after several protesters were pushed and arrested July 31.

Broderick Dunlap, an IE resident and graduate student, was one of the eleven arrested. He shared with those present he was never read his Miranda Rights, witnessed officers lie on their paperwork and was never told why he and the others were arrested that day.

“A Black sheriff by the name of Frank Harris immediately came and approached me and called me ‘brother’ but with his behavior on Friday he is no brother of mine,” Dunlap said about his experience. “He ran up and hit me with a baton in my chest with all his strength… he was obviously angry that I was not phased and I did not move after he hit me with a baton for no reason. I was then tackled and wrestled to the floor by four San Bernardino sheriff officers and they were also using unnecessary force well after I had been arrested — bending my arm and trying to injure my shoulder.”

Dunlap was recorded being apprehended by several officers on video after he walked away from Harris hitting him with a baton. He wanted to highlight Harris’s behavior for being overly aggressive with unarmed and disabled women.

“He is on video tackling a group of women like they were in a football game,” Dunlap said, arguing that the officers should be reprimanded.

The Black Lives Matter IE chapter believes that its leadership was specifically targeted by the sheriff officers July 31 only two days after the group fed one thousand families in San Bernardino County.

“On July 31st I was brutalized and arrested by the San Bernardino Sheriff Department,” an organizer and disabled mother who only went by Yocelin said. “I was in no way posing a threat to them or the courthouse as we have been protesting for weeks in the name of Lawrence Bender. Officer Harris bulldozed into the crowd, hurting me and my partner and later hitting my phone out of my hand shattering it.”

Officer Harris was recorded on video shoving women with great force and hitting the phone out of Yocelin’s hand. Several officers were also recorded hitting an organizer, who only went by Avery, while attempting to subdue and arrest him.

The BLM IE group demanded Lawrence Bender be set free and the charges against the IE Eleven be dropped. The group also wanted to bring awareness of the injustices facing the inland community by those with authority.

“Lawrence Bender, unfortunately, is not a unique case,” Johnson said. “There are a lot of cases that are happening like that right now. We need to pay attention, we need to be aware, we need to be vigilant as a community. The people have the power! We need to show our power.”