Behind the Headlines: How a Community Came Together and Ended the Career of a Racist Assistant DA 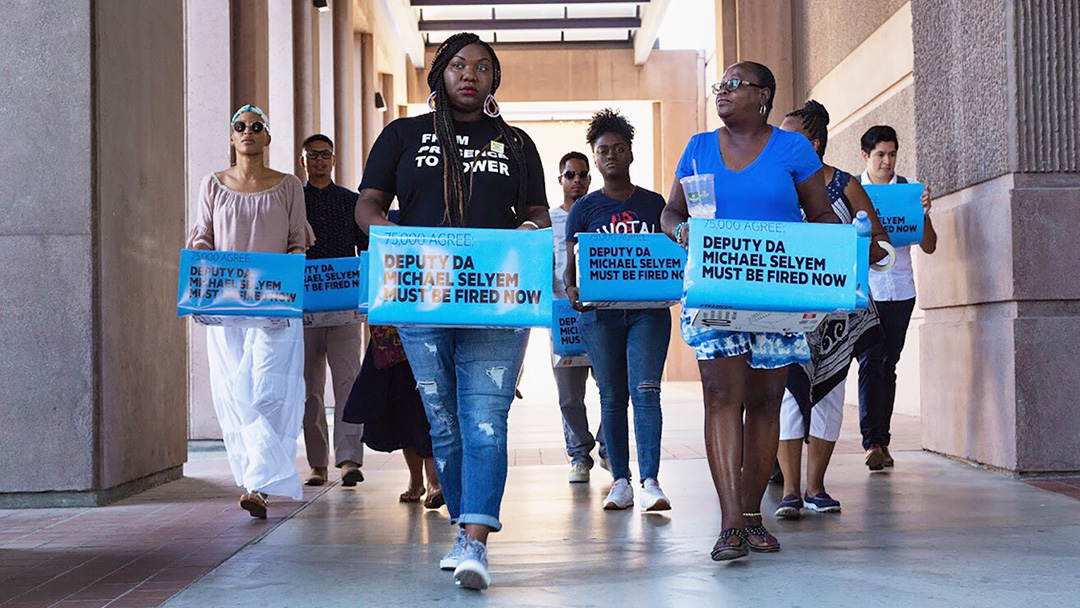 “Changes can come from the power of many, but only when the many come together to form that which is invincible . . . the power of one.”

When previously acclaimed top San Bernardino County gang prosecutor Michel Seylem resigned under fire early this month, it was welcomed news for members of the community who were shocked and disgusted by his xenophobic and racist rantings on social media.

After a six-month investigation that began when an internal complaint was filed against him last June, rather than firing him the District Attorney’s office allowed him to make a voluntary exit.

Much has been written about his derogatory social media postings that included disparaging remarks about former First Lady Michelle Obama and U.S. Congresswoman Maxine Waters, a racial reference to immigrants and a racially despicable comment about a Black man shot and killed by police, however, little has been said about the dedicated and relentless efforts of the community that played a pivotal role in his resignation.

Beyond the abrupt ending to Seylem’s career and the salacious details of his postings, there is an even more compelling story about how a community came together and demanded justice and accountability on this issue.

“There is a piece of the narrative that has been missing up to this point,” shared Lanae Norwood, an organizer and activist born and raised in the Inland Empire and founder of Ideal Culture, an institute devoted to the development of equity, advocacy and leadership. “As a field director with the Color of Change [a digitally based civil rights advocacy organization] I became aware of the social media postings through someone who works with the District Attorney’s (DA) office.”

According to Norwood, Seylem’s comments became public because someone from the DA’s office who [for obvious reasons] did not wish to be identified, sent the posts to the Sun Newspaper to expose him.

There was some concern The Sun possibly delayed publishing the story. (The IE Voice made attempts but was unable to confirm this speculation before publication.) Regardless, the D.A.’s office launched an internal investigation into the postings in late June 2018 and The Sun first published the story in early July 2018.

“At the time, I was an organizer/deputy field director for the Color of Change (COC). We had just come off the San Bernardino County District Attorney’s race where we had endorsed Jason Anderson,” Norwood explained. She added how the COC was aware of the practices of former San Bernardino District Attorney Mike Ramos. “He was not the type of candidate we felt represented the types of criminal justice reforms that we advocate and organize around.”

On the heels of the election in June, having successfully achieved their objective by unseating Ramos, Norwood was in the process of consulting with the local organization, Congregations Organized for Prophetic Engagement (C.O.P.E.), a faith-based coalition working to train and develop the capacity of religious and lay leaders in congregations across the Inland Empire to protect and revitalize local communities.

They were working to develop the recent #ReThinkPublicSafetySB campaign. “The campaign, rooted in public safety, is intended to shift the narrative around what public safety looks like for communities of color here in San Bernardino.” The goal, according to Norwood is to work from a data driven perspective and really focus on helping to support investments in programs aimed at rehabilitation, youth-focused initiatives, immigrant protections, etc. “That’s actually what we think public safety is,” she stressed.

It was during this period, on the heels of the election and the work with C.O.P.E., Norwood shared, “that the Seylem comments came across my desk [holding him accountable for his postings] completely aligned with the work and values we were advocating for.”  Bringing more attention to Seylem’s social media postings was essential to the ultimate end of his career with the San Bernardino District Attorney’s Office.

Norwood knew that one of the key values of COC is protecting Black women. Therefore, engaging COC’s digital organizing campaign team could bring support, awareness and publicity to an effort to hold Seylem accountable for his actions.

According to Norwood, as a digital organization, COC has a great membership base. In addition, during the Anderson campaign, she and others had held a lot of community and member led events locally. “We built these volunteer squads, these teams of Black voters, who were learning leadership and organizing to help hold decision makers accountable locally and to bring awareness to the challenges of Black communities here in San Bernardino County.”

Norwood first engaged the campaign department of COC (the nonprofit organization not the COC political PAC). “After bringing the issue to their attention, there were local members I had built relationships with from work we had done previously. Some of our members were outraged,” she highlighted.

One such member was Aaron Bratton who was so incensed, he launched the first petition calling for the termination of the Deputy DA. Bratton is a third-generation African American resident of Ontario whose father, Walter Bratton, was the city’s first Black firefighter.

A graduate of Ontario High School who earned his undergraduate degree in political science at Cal State University San Bernardino and a recent graduate of Pepperdine University Law School, Bratton made the decision to bring his passion, education credentials and talents home to the County of San Bernardino and is already working to serve the greater good. He is a political & business consultant, as well as managing partner for Shining City Advisors LLC. In addition, he is currently the Lead Organizing Consultant for the #ReThinkPublicSafetySB coalition.

Bratton was initially a strong supporter of Public Defender Edward O’Brien in the race for San Bernardino County District Attorney. After O’Brien withdrew from the campaign, although Bratton was not a part of Anderson’s campaign team, he supported him and made some introductions to members of the community. 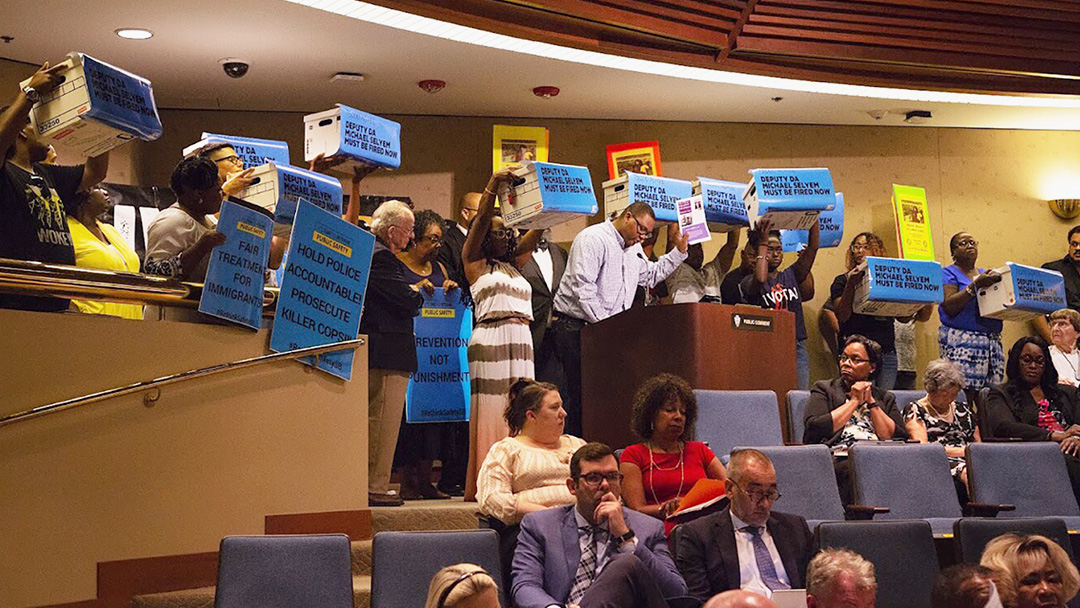 “When the Michael Seylem story broke, we wanted Ramos to fire him immediately and he kept stalling,” Bratton explained during an exclusive interview with the IE Voice/Black Voice News.

Bratton and Norwood coalesced with other organizations in the effort to oust Seylem.  They included the #ReThinkPublicSafetySB coalition, C.O.P.E., the ACLU, the San Bernardino Chapter of the NAACP and others.

“They [public officials] kept saying, ‘we have to let the investigation play out.’ What investigation? They stretched it out and circled the wagons,” Bratton stressed adamantly.

Bratton’s petition calling for Seylem’s termination gained a lot of support, momentum and traction. Other organizations saw it and spread it to multiple platforms.

“That is how we came with the 75,000 signatures,” Norwood confirmed. “COC was able to aggregate all of those petition signatures and deliver them to me.”

Norwood shared how she brought the issue to the #ReThinkPublicSafetySB coalition. “I wanted local partners to be involved in the process of supporting the work that was being done, as one of their focuses on criminal justice reform. Norwood and Bratton subsequently brought the #fireseylem campaign to the coalition.

We decided to deliver the signatures to the San Bernardino County Board of Supervisors (BOS) as the  #ReThinkPublicSafetySB coalition and I stood in the gap as the COC field organizer.” She continued, “We developed a collective strategy to deliver those petition signatures to push for Seylem’s termination.”

According to Norwood, the petition garnered further support around the premise of protecting Black women. “That is something that I have not heard mentioned by any of the press or [read in any of the] articles.”

The petition also solidified the demand for police and District Attorney accountability. “We can’t have a D.A. who is prosecuting people, who is supposed to be fair, unbiased and impartial, making such derogatory and inflammatory statements about communities of color.”

Norwood said initially they tried to engage former D.A. Ramos, however he was not responsive to their demands. “He did not make himself available to our coalition to hear and address our concerns around Seylem’s racist and salacious comments.”

She continued, “That’s when we decided we were going to deliver our 75,000-signature-petition to the county supervisors who are charged with the oversight of the District Attorney and public safety budget for the county.”

The group sought to bring awareness to the board that their constituents shared their outrage and frustration with Seylem’s social media postings and did not feel he was fit to serve as a public servant and be employed with taxpayer dollars having made such comments about Black women, Black men and the immigrant community.

Before their presentation to the board there were meetings with elected officials, including a couple of supervisors, to ask them to publicly denounce Seylem’s statements.  “We had several elected officials outside the BOS that made (on the record) official statements about his comments.  We approached the BOS with all of that information and with the petition and requested a review of all Seylem’s cases—since he had expressed such bias, how could you trust his investigations?” they asked.

During the session with the board, several involved in the effort made public comments including Bratton, who is also a member of the #ReThinkPublicSafetySB campaign, Rev. Sam Casey from C.O.P.E. and Attorney Francine Brookins, among others. They left the petition with the board and the supervisors agreed to consider their concerns.

As requested, the D.A.’s office eventually completed an investigation into Seylem’s cases, however they found no wrongdoing.

This story ends where it started, after a six-month investigation into Seylem’s social media postings, he was allowed to resign. Both Norwood and Bratton had hoped he would be terminated, but overall were satisfied with the impact their efforts had in pushing the issue to resolution.

Referring to Anderson, Bratton further noted how written into his campaign material for San Bernardino County District Attorney was a promise to implement mandatory implicit bias training within the DA’s office. “One of our demands is for him to do what he campaigned he would do. The Seylem case heightened the importance of it.”

The efforts of the entire coalition and all the San Bernardino citizens who supported it through the petition, speaking at the supervisor’s meeting and in hundreds of other ways showed what can happen when many come together to form the “invincible power of one.” They launched a petition, kept-up public pressure, demanded meetings, called on elected officials to take a public position, challenged the Board of Supervisors to act, and in the end achieved the desired outcome.

The Seylem saga was more than a story about a racist DA who was forced to resign. Behind the headlines was the story of regular citizens who came together and exercised their right to hold those elected and appointed to serve them—accountable.

Header Photo: The petition drop at the county supervisors demanding the termination of DA Selyem