As COVID-19 Raged, Riverside County Acted to Avoid One Super-Spreader Event… What Took So Long? 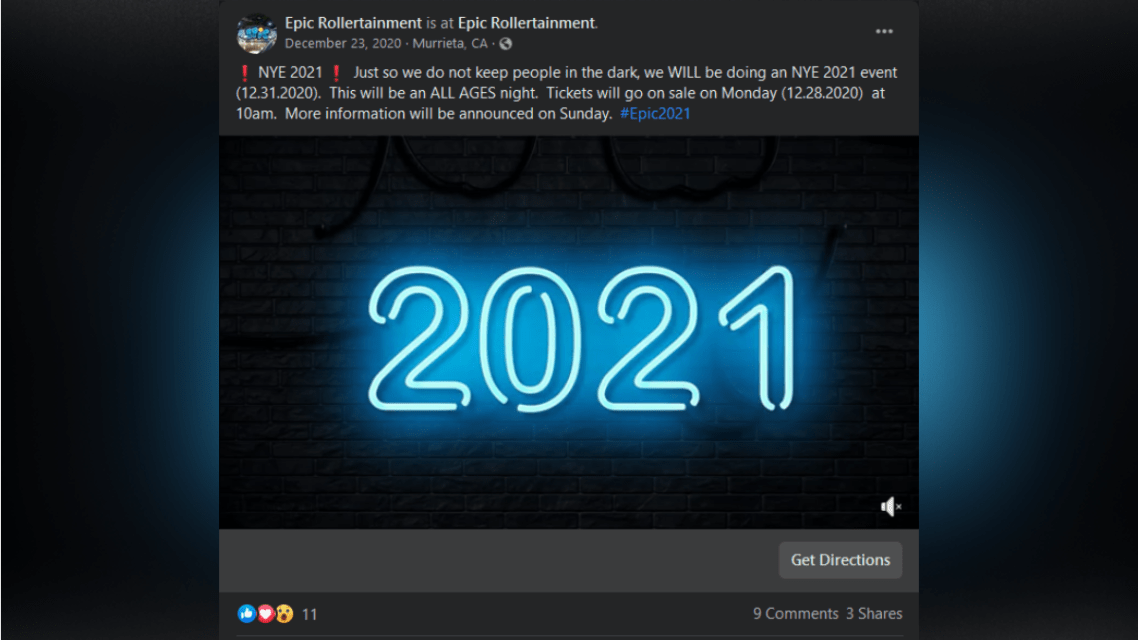 “I am happy to announce that all charges filed against us by the county of Riverside, along with the TRO (Temporary Restraining Order) have been dropped,” posted the owners of Epic Rollertainment Roller Skating Rink in Murrieta on social media Jan. 9.

The business planned the event despite all of Southern California being under a stay-at-home order at the time due to the region’s ICU capacity being at zero percent. Under the order, roller skating rinks, considered family entertainment centers, were required to be closed. Epic Rollertainment owners claim the skating rink was closed for nine months due to COVID-19 before opening in December.

When the county shuttered the facility, the owners posted on Facebook, “[We] did not open our doors without A LOT of careful consideration. We fully grasp the severity of this virus and do not take lightly the suffering it has brought to so many, however, this virus is not the only threat we are all facing right now.”

They went on to stress how, as owners, they heard from so many in the community about their struggles and those of their children due to these lock downs.

“[W]e were so glad that we were able to bring some joy back into your lives, even for only a moment.” 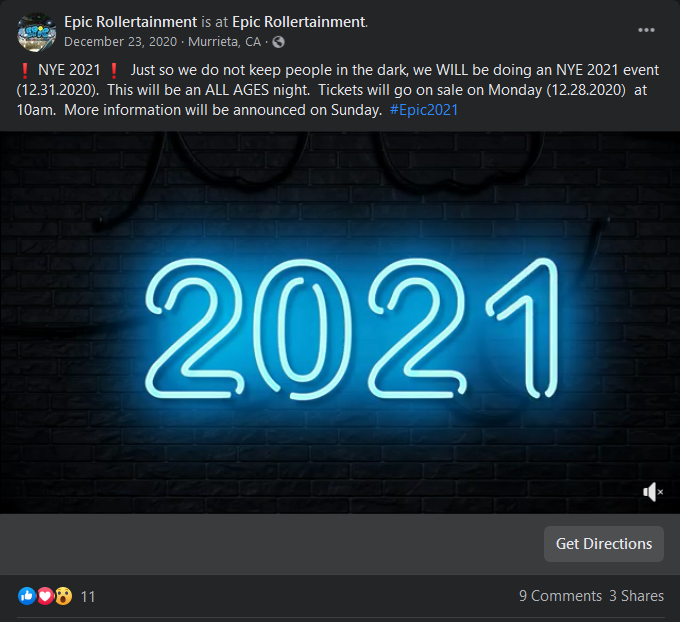 However local critics question whether it was worth the risk of potentially exacerbating the virus’s spread in the community at a time when the virus raged out of control.

There are lingering questions regarding why the restraining order was rescinded by the county and the case dismissed. After all, at the time the virus was continuing to rage in Riverside County.

An article headline in the Los Angeles Times on Jan. 8, 2021, just a day before the Rollertainment owners posted their “good news” on Facebook read “Riverside County sees COVID-19 cases skyrocket…”

“Amid a coronavirus surge, overwhelming hospitals across Southern California, Riverside County and the greater Inland Empire are experiencing some of the most dire conditions. . . The rising case counts invariably led to an increase in hospitalizations and, ultimately, deaths,” the article read in part. “On Wednesday, there were 1,634 patients hospitalized with COVID-19 in Riverside County, and 364 of them were in the ICU, according to state data.”

It continued, “Over the last seven days in Riverside County, about 200 people have died of COVID-19. The weekly death toll is the third-highest in the state when not adjusted for population size.”

Riverside residents may recall conditions at hospitals in the area during this period had worsened to such an extent within days of the LA Times article federal military medical personnel from the Department of Defense were called in to assist. Yet, county officials offered a form of amnesty to Epic Rollertainment despite its violation of an order designed to save the lives of area residents.

“The Mayor of the city of Murrieta contacted us and said that they received tons of letters on our behalf and we should be very proud of the business we have built and of course we are,” the owners stated on Facebook. “As you all know the city was not behind these ridiculous charges against us and I truly feel that the city’s hands are tied when it comes to these matters, however they did go to bat for us in whatever capacity they were able to.”

The IE Voice and Black Voice News reached out to Riverside County officials for clarification regarding why the restraining order was lifted as the virus raged.

“Riverside County sought a temporary restraining order from the court to prevent the business from holding a large New Year’s Eve party that would be considered a super spreader event,” County spokesperson Brooke Federico responded. “When the business canceled the New Year’s party, the county did not pursue additional court action.“

Federico was asked what prompted the county to act regarding the New Year’s eve celebration when Epic Rollertainment’s Facebook page shows it was open for Christmas without any action by the county, and, whether or not the owners were advised to remain closed when the restraining order was lifted?

Federico had not responded by publication.